The 30 Most Colorful Buildings in the World 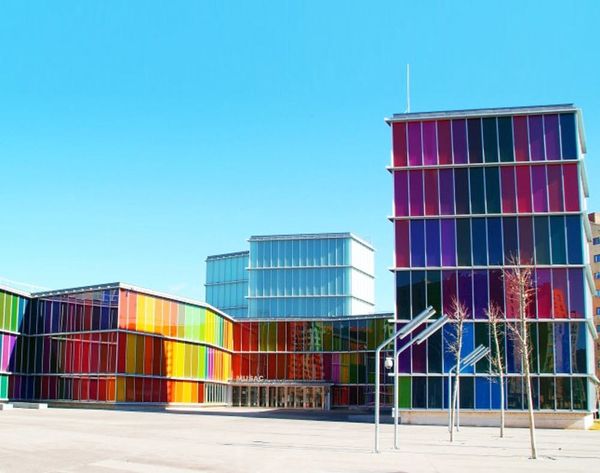 Be gone, boring no-color bricks. There’s nothing in the world that makes this crew happier than a splashed-up building. We recently featured the most colorful cities in the world, and this time we’re showing you the most vibrant, colorful buildings from around the world. After you look through these, you might end up turning your home into a version of your own technicolor dream. Let the paint projects begin!

1. Colored Balconies, Boulogne-Billancourt, France: Wouldn’t you be happy if you lived in this fun + colorful building in France? The 29-unit housing project sports a gray exterior with bright-red-framed windows on one side while rainbow-inspired balconies overlook the shared garden. (via Design Rulz)

2. International Management Institute, Kolkata, India: We bet you’d never skip class if you were enrolled in this school. The building was designed with youth and nature in mind. The wild appearance symbolizes both the unpredictable nature of the sky and the vibrancy of today’s youth. (via Arch Daily)

3. Happy Rizzi House, Brunswick, Germany: American 3-D pop artist James Rizzie and German gallery owner Olaf Jaschke dreamed up this… well, dream, and while conservative locals were first appalled by the building, nearly 20 years later, no one can imagine Brunswick without it. (via Kuriositas)

4. Galeria Pagé, São Paulo, Brazil: This building is considered the first shopping mall in São Paulo. Shopping doesn’t get much more colorful than that. (via Chama Producao)

5. Pixel, Melbourne, Australia: A super energy efficient and carbon neutral building, Pixel catches eyes for more reasons than its bold looks. Even Hilary Clinton made a visit to the brewery-turned-energy efficient building in Melbourne on her hunt for green technology. (via Graffart)

6. Carabanchel Building, Madrid: We have no doubt that LEGO blocks inspired this Madrid building in big and awesome ways. This pixelated building features 16 different color panels that create one giant LEGO-wannabe. (via Trendland)

7. Sugamo Shinkin Bank, Tokyo: Believe it or not, this is a bank. And what stands out about this Japanese credit union is pretty clear: It has 12 layers of colors, stacked up like a rainbow. These layers illuminate at night to create a warm and welcoming atmosphere. If you had an account there, you’d go to the ATM every day. We have no doubt about it. (via Architizer)

8. Museu de Arte Contemporáneo de Castilla y León, Spain: This museum is kicking it old school. Don’t believe us? For the panel windows, the architect drew inspiration from gothic cathedrals. And let’s face it: Modern day buildings don’t use color the way they used to, meaning this building is secretly harkening back to the days of old. (via Virginia Duran)

10. Dexia Towers, Brussels: This third-highest skyscraper in Brussels, equipped with 72,000 LED lights, is actually a weather forecaster. The building’s 6,000 windows light up the night sky to tell residents whether it will be sunny or rainy tomorrow. We’re pretty sure everyone in Brussels is like, “AccuWeather what?” (via Inhabitat)

12. Ministry of Communications and Information (MCI), Singapore: Don’t you wish your government offices looked as colorful as Singapore’s? This building houses branches in charge of media, information technology and public libraries in Singapore. The iconic rainbow-colored shutters are one of travel bloggers’ favorite sights to snap up in Singapore. (via Tom Benner Reports)

14. Experience Music Project Museum, Seattle: Still a hard-core Nirvana fan? Right this way. We all know Seattle is the home of Starbucks, grunge music and super cutting-edge technology. But wow, this museum definitely sums up what Seattle is all about. EMP museum is a non-profit dedicated to all the great things about contemporary pop culture, housed in sleek and metallic architecture. (via Kuriositas)

16. Residential Apartments, Mitaka, Tokyo: This outrageously colorful building is actually a residential apartments in a suburb near Tokyo. It’s dedicated to Helen Keller as a tribute to learning the relationship between nature and humans by using our bodies to discover a new world. (via Japan Two)

17. Netherlands Institute for Sound and Vision, Hilversum: This is a serious tie-dye situation. This building might be cuter than any of those leggings you’ve been wearing as of late. It houses the national archives of Dutch radio and television and a media museum. (via Mapolis Magazine)

18. Desigual Advertisement, NYC: Desigual is a fashion brand headquartered in Barcelona, known for its innovative graffiti art and splashes of vivid color. In step with the Spanish brand, their artwork is popping up in NYC and brightening up the streets for miles. (via Wandering Brummell)

19. Chungha Building , Seoul: If you were a fan of Gangnam Style a few years ago, we trust you know what you were singing about. For those of you who aren’t as familiar, Gangnam is an uberposh neighborhood in Seoul. The Chunga Building was built in the ’80s, but got an upgrade last year once the world discovered the Youtube sensation. (via Design Boom)

20. Book Shelf, Perm, Russia: Believe it or not, this is a housing complex. We can’t help but think that libraries everywhere should follow suit. (via English Russia)

21. Hesperia Bilbao Hotel, Bizkaia, Spain: This four-star hotel is located along the Bilbao riverfront, a residential area in Bizkaia, Spain. Its 36 colorful lookouts consist of three primary colors — red, yellow and blue — and their complementary colors, green, violet and orange. Your vacation is guaranteed to be tops: Looking through colors always makes everything better, right? (via Architecture Served)

22. The Saguaro Hotel, Palm Springs, CA: The Saguaro was built in honor of the vibrant spirit of the Southwest. The color choice is definitely applauded by SoCal vacationers. The bold hues reflect indigenous flowers of the desert. This boutique hotel provides the best way to start a vacation — a big dose of color therapy to kick your concrete-jungle blues. (via Architecture Lab)

23. Hotel building, Chefchaouen, Morocco: Ombre is not just for your hair and sweaters. It’s for hotels in Morocco, too. In fact, it’s not just this hotel that has beautiful hues of ocean blue. The whole region of Chefchaouen is covered with this stunning blue. Yup, we know where we’re going for our next vacay. (via Urban Peek)

24. Hotel, Pattaya, Thailand: Pattaya is a tourist town located on the eastern coast of the Gulf of Thailand. Millions of tourists arrive to this little coastal town for many reasons. One reason is the beautiful cityscape filled with technicolor hotels and houses which give the entire town an exotic vibe. This hotel is just one example of what awaits you. (via The Most 10)

25. The Crayola Experience, Easton, Pennsylvania: How could we not include Crayola on our list? They’re the color authority. With 60,000 square feet of colorful adventures and attractions for kids, this place demands an entire day. Trust: Both you and your kids won’t wanna leave. (via Tea Parties and Play Dates)

26. Pantone Hotel, Brussels: Speaking of color authorities, apparently there is a Pantone hotel in Brussels. The building has seven floors decorated with different color palettes with sleek interior design. Each guest room is a true work of art. Crisp white walls and bedding act as a canvas to bold appliances and decor. (via Plenty of Colour)

27. Neal’s Yard, London: Located in London, Neal’s Yard is hands down the cutest salad bar in the world. All the buildings in this little alcove are super artsy, making the alleyway something right out of a storybook. (via Kelly Brooks Yoga)

28. The Nautilus House, Mexico City: Organic form and modern architecture meet color. The result is a uniquely shell-shaped house in Mexico City. A family tired of practical squared houses built it as a way to integrated their home with nature. (via Design Dautore)

29. Barbie Store, Shanghai: Located along Huaihai Road, one of the most expensive shopping streets in China, Barbie Shanghai was the first Mattel flagship store in the world. Sadly, this Shanghai mega store had to shut its doors, but we pay tribute to the pop of pink that is no more. (via Archidaily)

30. Water Cube + Bird’s Nest, Beijing: Remember 2008? When the Bird’s Nest and Water Cube were the main venues of the Beijing Olympics? These cutting-edge and futuristic figures reaffirmed that China is indeed a power economy. The steel structure and bubble-covered cube illuminate the night sky in a rainbow of colors. Those Olympic glory days might be gone, but this is one place you’ll still want to visit when you’re in China. (via Booking Mom)

Yuka Murai
As a fashion writer and official blogger at ELLE Japan, Yuka is always on the hunt for awe-inspiring stories, ideas and products from all over the world. Raised in Tokyo, she currently resides in the outskirts of Portland, OR. She has a two-year-old son and a newborn daughter.
Home News
More From Home News