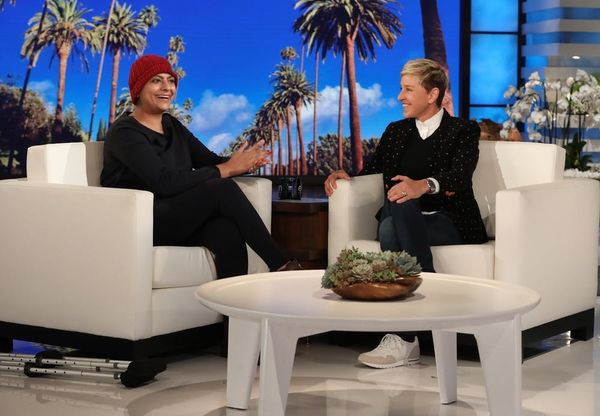 Top Chef fan favorite Fatima Ali recently revealed that a previous cancer diagnosis had returned and that doctors had only given her a year to live. Now, she’s sharing her inspiring story of how she’ll spend the time she has left — and getting some surprise help from Ellen DeGeneres along the way.

“Right after filming Top Chef, it was supposed to be one of the most exciting times in my life,” Ali said on the Friday, November 2, episode of DeGeneres’ show. “Instead, I was in the hospital because I was newly diagnosed with Ewings Sarcoma.”

Ali described the diagnosis as “incredibly jarring,” saying, “It was the biggest shock of my life. But I knew the only way I was going to beat this was through positivity and rallying people around me.”

The season 15 standout went on to share that she and her mother, Farezah, spent days during which Ali was receiving chemotherapy watching DeGeneres’ show, and that appearing on the show (and making the talk show host her best friend) was one item she could cross off her bucket list. She plans to spend her next year doing even more of that: She will travel the world and eat at all of the restaurants she has always wanted to visit.

“I am so looking forward to this next year, because I am surrounded with so much positivity,” Ali said. “I’m so lucky to have friends and family like I do. We are going to be taking an entire tour of the world, eating all this absolutely delicious food. I know that’s the only way to get through this.”

DeGeneres, moved to tears, was inspired by Ali’s positive outlook and approach, and surprised the cook with a check for $50,000 dollars to help with medical and travel expenses. Ali said she will also donate some of the money from a GoFundMe account toward research efforts for Ewings Sarcoma.

“This is really hard. It’s never fair. Anyone who is dealing with anything, you just think, ‘This isn’t fair,'” DeGeneres told Ali. “But you get to live the way we’re all supposed to live. Who knows what tomorrow brings? You just so happen to have this diagnosis, but we all should be living like that, because none of us know what tomorrow is.”

Watch the entire inspiring interview below.

What do you think of Fatima’s bravery? Let us know @BritandCo.