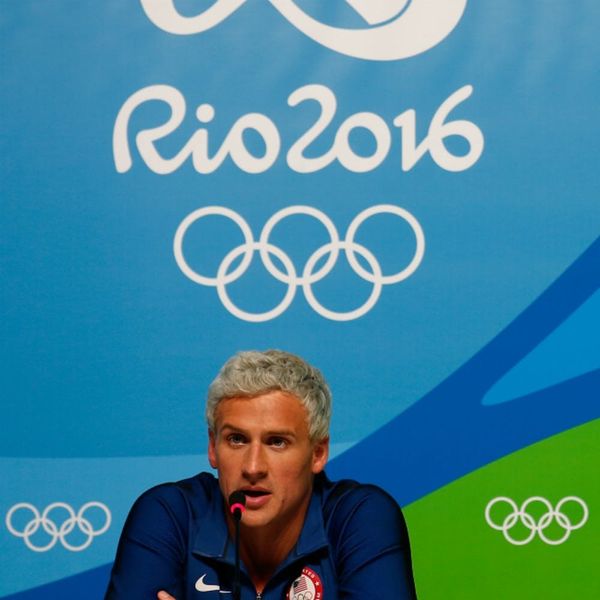 As with any major event, the Rio Olympics have produced no shortage of crazy stories. While most of the news coming out of Rio is heartwarming, like Will Claye’s best proposal of the games to girlfriend Queen Harrison, some of the news is downright confusing. Earlier this week, Team USA swimmer Ryan Lochte claimed that he and his teammates were robbed at gunpoint while partying in Rio after their swimming events had finished. Something seemed off about their story, however, and now, police in Rio are setting the record straight. It’s a strange tale, even for Lochte, but it helps explain what the hell is going on with him right now.

After his dramatic IG post earlier this week, Lochte left Brazil with one teammate, followed by two others who were detained when trying to fly back to the US. Why? The initial story was that the Americans were robbed at gunpoint in Rio, but according to closed circuit cameras and eyewitness accounts, Lochte and crew vandalized and publicly urinated at a gas station. It now appears that the guys tried to cover up their bad behavior by taking advantage of Rio’s notorious crime rate and made up the story to avoid getting arrested in a foreign country.

While some are saying that the guys got in trouble simply trying to have fun, we can’t help but be dismayed that they tried to use their status as Olympians and Americans to cover up for public indecency and disrespect while representing the US on the international stage. As for right now, Lochte’s teammates Gunnar Bentz, Jack Conger and Jimmy Feigen all seem to be cooperating with Brazilian and Olympic officials. Lochte, however, has yet to make an updated statement. While we can’t say what might happen, we do hope that these four are taught a strong lesson on how to behave when traveling abroad, especially if representing their country.

What do you think about the new allegations against Ryan Lochte? Tell us @BritandCo!

Kat Armstrong
Kat has been a writer, social media maven and mom for longer than she's willing to admit. She's also spent time in front of and behind the camera, interviewing celebs, politicians and acting as a producer for fashion and artistic photography shoots. When she isn't writing for various orgs and publications, she's hanging with her kids, husband and French Bulldog, Peter, in Toronto, Canada.
Olympics
Celebrity News
Olympics
More From Celebrity News