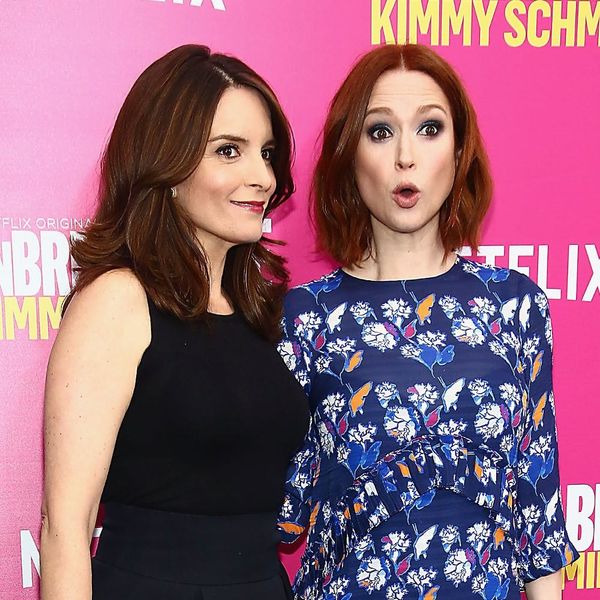 We were more than a little thrilled when we found out that the Unbreakable Kimmy Schmidt will survive for a third season. While we eagerly await its return to Netflix, we’ve just gotten a peek of the guest stars who will be appearing this year, and WOWZA!

At the end of season two, Kimmy (played by the hilarious Ellie Kemper, of course) not only found her long-lost mom, but she received a call from The Reverend Richard Wayne Gary Wayne, the man who kept her and other “Mole-Women” captive for 15 years. Played by John Hamm, we’ll soon see that Kimmy and The Rev are actually married (wha?!), but he’s now looking for a divorce.

According to IndieWire, the official season three synopsis reveals that “Kimmy finds herself in an unfamiliar position with the Reverend back in her life. Titus returns from his cruise and auditions for an exciting new role. Lillian has to break up with her boyfriend Robert Durst.” With all of the separate-yet-drama-sparking situations happening to our fave characters, there is plenty of potential for interesting characters to pop in and out of the action.

That will apparently include folks played by guest stars like Laura Dern, Daveed Diggs, Rachel Dratch, Ray Liotta, and Andrea Martin, as well as a few returning guest stars including Fred Armisen, Anna Camp, Mike Carlsen, Josh Charles, David Cross, Amy Sedaris, and even Tina Fey, who not only created the popular series, but has also appeared in each of the last two seasons as a different character. We can’t wait to see what cheeky role she takes on in season three.

You’ll be able to catch all of the aboveground action when Unbreakable Kimmy Schmidt’s third season hits Netflix on May 19.

Which Kimmy Schmidt guest star(s) are you most excited to see? Let us know @BritandCo!

Desiree O
Desirée O is a ‘Professional Bohemian’ who loves anything and everything related to the arts, entertainment, and pop culture. She ADORES being a ‘Newsy’ for Brit + Co, covering all of the latest tidbits of awesomeness that you want to read about. When she’s not writing, she’s either making messy art, going on long adventurous walks with her camera, or poking around over at bohemianizm (http://www.bohemianizm.com/). You can find out about Desirée O and her work at http://DesireeO.com/ or follow her on Twitter @DesireeO.
Netflix
Pop Culture
Netflix Streaming