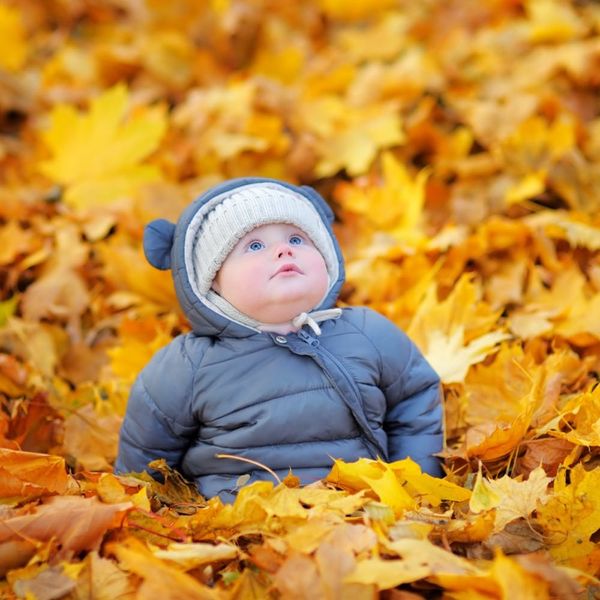 Happy fall! If you’re as in love with PSL season as much as we are, you’re thinking about fall-themed baby names, but names can reflect the season far beyond just Autumn and Leaf. Here are 14 unusual baby names that make more subtle references to fall, including a hearty dose of international names.

1. Aki and Akiko: These two Japanese girl names have lovely autumnal meanings: Aki means born in autumn, while Akiko translates to autumn child. Another international name for girls is the Turkish Hazan, which also means autumn.

2. Albero: The fall season immediately brings to mind the amazing palette of fantastic tree foliage colors, and Albero is the word for tree in Italian. An exotic namesake for an ancestral Albert, perhaps?

4. Azaro: If you’re looking for a truly distinctive name beginning and ending in A for your autumn baby, Azaroa means November in Basque.

5. Blaze: The perfect name to describe the wild coloration of New England autumn foliage, word name Blaze — originally a form of the French Blaise — has been on fire lately, now at Number 706 after entering the Top 1000 in 2000. Kate Winslet used it as the middle name of her son Bear, and there’s a rock musician named Blaze Bayley.

6. Christabel: And now for something completely different: a notable namesake born on the Autumn Equinox, September 22. Christabel Pankhurst was a famous British suffragist, daughter of the movement’s leader, Emmeline Pankhurst. An undiscovered “bel” name, Christabel was a poet character in A. S. Byatt’s novel Possession.

7. Jora/h: This pretty Hebrew name with the lovely meaning of “autumn rain” could fit right in with playmates Nora, Flora and Cora. George R.R. Martin used the Jorah spelling for the male character Jorah Mormont in his A Song of Fire and Ice novels.

8. Libra: One of the few wearable Zodiac sign names, Libra spans the astrological period from late September to late October and is an air sign whose attributes include balance, a sense of justice and appreciation of beauty and harmony. And Libra could be another path to the nickname Libby.

9. Lugh: Pronounced LOO, this is an Irish mythological name of a divine hero, associated with the harvest festival of Lughnasadh, which is named after him. It’s similar to the Welsh Llew.

10. Nina: This stylish classic appears in several cultures, from Russian to Spanish, and in many works of fiction. Now at Number 300 (175 on Nameberry), this decidedly not-weird name was chosen by Weird Al Yankovic for his daughter.

11. October: The creativity of two noted writers, Dave Eggers and Vendela Vida, is clearly evidenced by their choice of the name October Adelaide for their daughter. September, October and November are among the rarest of month names, but could make interesting, distinctive middles. The Italian form of the month name, Ottobre, is another possibility — Otto for short.

12. Soleil: We may not think of Autumn as the sunniest season, but the connection here (a bit of a stretch?) is the autumnal equinox, marking the beginning of Autumn, in which the plane of the equator passes through the center of the sun. Soleil is a particularly lovely French name starting to be appreciated herein the US.

13. Topaz: The glowing golden birthstone for the month of November, Topaz is a gem name just waiting to be discovered, with its z-ending sizzle. The topaz is said to have healing and energizing properties and also to bring good luck.

14. Woods: Forest has long been used as a boys’ first name, and there’s no reason why its synonym shouldn’t be considered as well. A fairly common surname (Tiger, James, Elle), it has the newly trendy S ending for boys.

Do you have a favorite fall-themed baby name? Tweet us @BritandCo with your faves!