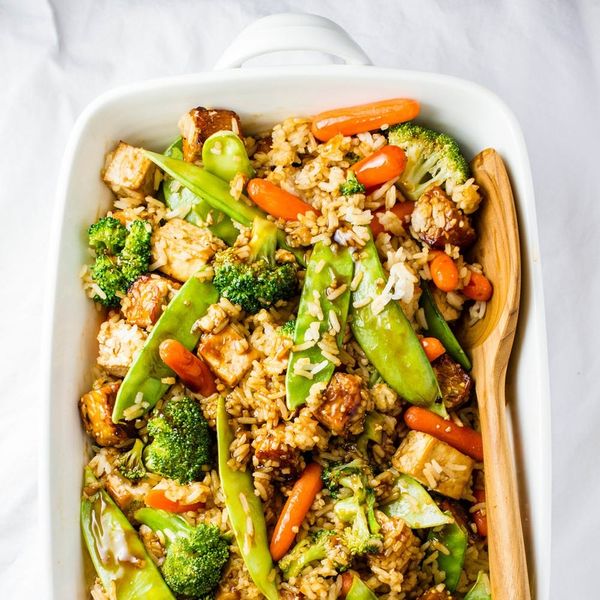 Vegan food isn't as fussy as it may seem. In fact, you can make vegan versions of just about all of your favorite foods, from vegan cheese to soul food, at home. But sometimes you get busy and nothing but a casserole will do. Luckily, the comfort food versions are just as convenient and tasty as the dishes you grew up loving. In fact, these vegan casserole recipes prove it.

1. Cheesiest Spaghetti Squash Boats: You won't miss dairy cheese one bit; these boats load up on all your fave plant-based versions. (via Brit + Co)

5. Quinoa Broccoli and Cheese Casserole With Crispy Chickpeas: Some days, you're just too lazy to make individual meal components from scratch. That's when this cheesy vegan casserole, loaded with veggies and protein, comes in handy. (via Fit Foodie Finds)

7. Vegan Creamy Potato Casserole: If you don't want to commit fully to puréed cauliflower, you can ease yourself into the idea with this creamy potato casserole. (via Blissful Basil)

9. Cheesy Rice and Broccoli Casserole: Vegan cheese sauce is not without faults — cashew-only recipes can be pretty heavy. This recipe makes for a casserole that's slightly lighter, thanks to a sauce that's made with potatoes and carrots, not just nuts. (via Catching Seeds)

11. Vegan Breakfast Biscuit Casserole: Eating vegan doesn't have to mean giving up convenience. This vegan breakfast casserole serves a lot of guests, so your family gatherings and brunch parties don't have to be a chore. (via Namely Marley)

12. Kale, Cauliflower, and Sweet Potato Gratin: This casserole works well as an entrée or a side. It features a coconut milk sauce that coats sweet potato, cauliflower, and kale. (via Foraged Dish)

13. Cauliflower Alfredo Scalloped Sweet Potatoes: Cauliflower is the secret ingredient of this alfredo sauce. It's baked along the sweet potatoes for a sneaky way to get two veggies in one dish. (via Food Faith Fitness)

14. Vegan Baked Pumpkin Mac n' Cheese: Vegan cheese substitutes can weird some people out, but this one is made from roasted pumpkin, nutritional yeast, and non-dairy milk. Top with crispy breadcrumbs for a dish that rivals conventional mac and cheese. (via Jessica in the Kitchen)

16. Vegan Eggplant Moussaka: This vegan moussaka, made with lentils and a vegan béchamel, totally hits the spot. (via Connoisseurus Veg)

17. Creamy Vegan Broccoli Wild Rice Casserole: In this recipe, the casserole gets an extra dose of flavor from lots of sautéed mushrooms and a topping of crispy breadcrumbs and herbs. (via The Veg Life)

18. Vegan Sweet Potato Casserole: Served alongside a Tofurky roast or with a dollop of cashew milk ice cream, you can't beat this sweet potato casserole. It's sweet, has a celebratory flair, and is totally vegan. (via Hummusapien)

19. Tomato Pasta Bake: Make dinner for a crowd with this pasta bake. Alternatively, the red sauce can be made ahead of time for easy weeknight meals. (via A Virtual Vegan)

20. Smoky Portobello Mushroom Vegan Cassoulet: Vegan French food may sound like an impossibility, but this recipe proves otherwise. It gives the classic cassoulet a makeover, adding mushrooms for a savory bite along with garlicky white beans. (via Connoisseurus Veg)

21. Easy Vegan Corn Casserole: Corn casserole goes with almost anything. Try the version alongside faux roasts or roast potatoes, or as a vegan-friendly side dish that omnivores will also enjoy. (via Namely Marly)

22. Zucchini, Tomato, and Potato Casserole: This is a colorful and flavorful way to get all the veggies and nutrients you need for dinner and as lunch the next day. (via The Veg Life)

24. Hungarian Potato Casserole: Some potato dishes can feel heavy, but not this one. It's made with a cashew sauce and kidney bean sausage crumbles and garnished with pickles for an added kick of tangy flavor. (via Green Evi)

Check out more easy dinner ideas on our Pinterest.

From Your Site Articles
Justina Huddleston
Justina Huddleston is a food writer living in Los Angeles. When she's not busy writing, she spends her time in the kitchen creating both virtuous and decidedly junky vegan food. Buffalo chickpea pizza, anyone? She's also been known to eat a plain block of tofu or beans straight out of the can for lunch, but somehow those culinary adventures don't make it to her Instagram. You can follow Justina on Twitter or see what's cooking in her kitchen on her blog, A Life of Little Pleasures.
Healthy Recipes
Recipes
Healthy Recipes Hit Refresh Recipe Roundup Vegan Recipes casserole recipes casserole
The Conversation (1)

Vegan Sweet Potato Casserole is So good! Definitely recommend that you try it!