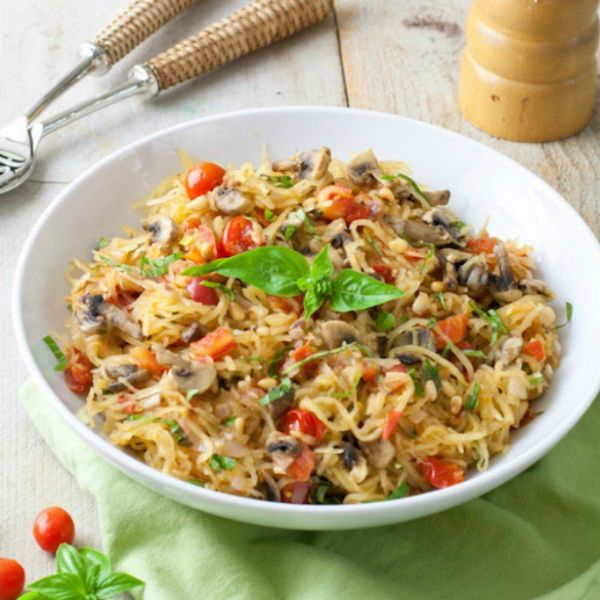 You might think vegetarian and Whole30 sort of cancel each other out, with ancestral diets like Paleo emphasizing grass-fed meats and vegetarians avoiding them. But when you imagine what our “ancestors” probably really ate, of course it would have been a plant-based diet. Abundant fruits and veggies are something both eating philosophies have in common. Grains and legumes — go-tos for many vegetarians — are out, but friendly starches like potatoes, yams, cassava and plantains are in, and they’re both tasty *and* filling. Also, if you’re not straight-up vegan-Paleo, you can get your protein from eggs and fish. Starting to sound deliciously doable? Here are 15 Whole30-friendly recipes that’ll have you saying: “I’ve got this!”

1. One-Pot Zucchini Pasta: With summer produce in abundance, this zoodle one-pot dish comes together so easily. It’s light and healthy and bursting with flavor — and cleanup is a breeze. (via Making Thyme for Health)

2. Tomato Mushroom Spaghetti Squash: Spaghetti squash is a tasty, gluten-free alternative to pasta, and this garlic sauce is to die for. Leave out the optional sprinkle of Parm (obvi), and it’s totally vegan-Paleo as well. (via What a Girl Eats)

3. Cauliflower Fried Rice: Soy sauce is out on Whole30, but coconut aminos to the rescue! With lots of veggies and ribbons of scrambled egg, this fried rice tastes just like the real deal. (via Little Bits of…)

4. Whole30 Potatoes With Rosemary: Is there anything more satisfying than thinly sliced potatoes? Serve this up with grilled salmon or a side of eggs, and you’ve got a totally tasty meal. (via Bravo for Paleo)

5. Carrot Ribbons With Rosemary Butter Sauce: You don’t need any fancy equipment to make carrot ribbons. Just grab a vegetable peeler and go for it. These steamed sweet carrots smothered in butter will make you happy you did. (via Do You Even Paleo?)

6. Caramelized Onion Butternut Squash Crustless Quiche: If your mornings go from zero to 60 in the time it takes you to hit the alarm button, you need this quiche in your life right now. Make it on Monday and you can heat up a slice each day for breakfast. Nothing could be easier. (via Physical Kitchness)

7. Creamy Spinach Sweet Potato Noodles With Cashew Sauce: Sweet potatoes make the most delicious vegetable noodles around, and these pair so well with the cashew cream sauce. Even the staunchest carnivores in the house will be begging for seconds. (via Pinch of Yum)

9. Whole30 Pina Colada Coleslaw: Finding a Whole30-compliant mayo for your cole slaw can be quite the quest — most of us resort to making our own. But this slaw has a simple dressing that calls for coconut milk, pineapple juice and tangy apple cider vinegar that gives shredded cabbage some serious *YUM*. (via Physical Kitchness)

10. Whole30 Potato Salad: If there was ever a Whole30 comfort food, this is it! Take it to your next potluck and it will be the star of the side dishes table. (via Tastes of Lizzy T.)

11. Roasted Vegetables Breakfast Hash: A common challenge of Whole30 is finding new ways to get your protein, and these caramelized roasted root vegetables pair perfectly with scrambled eggs. Make them ahead and they’ll keep well in the fridge, so you can warm them up as you need them. (via What’s Ur Home Story)

12. Cauliflower Rice Tabbouleh: If you haven’t discovered riced cauliflower yet, you’re in for a treat. This delicious dish features all of the same lemon and fresh herb flavor you expect in a tabbouleh, with double the dose of veggies. (via Wholesomelicious)

13. Cauliflower Pizza Bites: If you’re missing pizza, you’ll love these baby quiches, and the recipe could not be easier. Just whip some eggs in a bowl and toss in your favorite pizza mix-ins. Serve with a marinara dipping sauce and you’ll taste yummy pizza flavor in every bite. (via Wicked Spatula)

14. Ratatouille: This time of year, the green market is overflowing with zucchini, eggplant and tomatoes, so take advantage. Slice them thin and layer them like a rainbow. Smothered in your fave marinara, they’ve got that authentic Italian taste that really delivers. (via A Clean Bake)

15. Paleo Eggs in Hell: There are a billion and one versions of this dish floating around, but many require a ton of ingredients. This recipe calls for canned tomatoes, eggs, onions and seasoning. Done and done. (via Wicked Spatula)

From Your Site Articles
Sally Jones
Sally Jones is a writer and editor living in New York City. She has worked at many websites including iVillage, Ladies Home Journal, More, Parenting, Cosmopolitan, The Knot and YourTango, in jobs ranging from editor to COO. Renovation and interior design are her unhealthy obsessions hobbies. She has renovated every home she's lived in, including the rentals, and like... whoa, who does that? You can catch her at her blog Renov8or.
Healthy Recipes
Healthy Eating
Healthy Recipes Paleo recipe roundup Vegetarian Recipes Whole30 Recipes
The Conversation