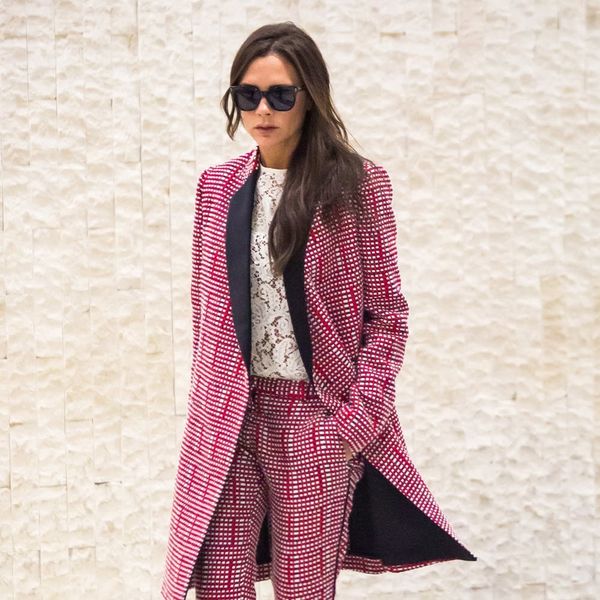 There are few celebrities with as stylish of a track record as Victoria Beckham (she could wear a paper bag and still look chic!). Not one to follow the fashion herd, this former Spice Girl-turned-fashion-designer has come a long way since her pop star days. It's Beckham's trend-right, yet still super refined and timeless style — not to mention her effortless juxtaposition of ladylike and menswear-inspired looks — that keeps us coming back for more. Swipe through for 13 styling tips we've gleaned through the years from the master of posh herself.
Don't shy away from color. Trust that Beckham is just as schooled in pulling off concentrated color as head-to-toe black. Her red dress and sparkly green glitter pumps receive a perfect 10 in our book. (Photo via David M. Benett/Dave Benett/Getty)
Let your outerwear do the talking. Score big with an avant-garde topper that speaks to your inner style chameleon. We ALL need to start living by this simple style resolution. (Photo via SAV/GC Images)
Seek solace in jeans and a tee. When you're a mum of four, fashion designer, and full-fledged businesswoman, a trusty, chic uniform is a must. Beckham's off-duty getup consisting of a laid-back tee, rolled-up boyfriend jeans, and nude heels seriously hits the mark. (Photo via UMV/Star Max/GC Images)
Upgrade to Athluxury 2.0. Peep Victoria B's athluxury take on American sportswear — namely, how she's coupled her Adidas Superstars with silk trousers and tailored outerwear for a defining look. (Photo via Pierre Suu/GC Images)
Rock boardroom-approved trousers beyond the boardroom. Who knew slouchy orange menswear-inspired trousers could look this en vogue with a flowy blue blouse and an elegant updo? Day or night, work or play, we think we've found a #winning lewk. (Photo via @victoriabeckham)
Adopt an all-black-errr'thang routine. Outfitted in her signature noir turtleneck, black skinnies, and incognito shades, this is the Victoria Beckham we've come to know and love. (Photo via James Devaney/GC Images)
Get hygge with it. Between her slouchy tie-waist slacks, oversized shirt, and laid-back demeanor, Beckham's got the hygge look down pat. (Photo via Peter White/Getty Images)
Never underestimate the power of a power suit. Whether you run your own fashion empire or not, nothing says modern-day lady boss like a printed pantsuit that slays on and off the clock (and even en route to JFK). Tousled hair and signature "Posh" pout not required, but definitely appreciated. (Photo via Alessio Botticelli/GC Images)
It's all in the details. Maybe it's a faux-fur-trimmed dress or perhaps it's a high-drama hat worthy of the royal wedding; either way, Victoria B's always ready to strike a pose. It's the ladylike extras that define this bona fide tastemaker's wardrobe. (Photo via Suhaimi Abdullah/Getty)
Wow from the back. Risqué jumpsuit with cheeky cutouts and an open back? Check. Extra AF statement earrings to go with? That's what we're here for. (Photo via @victoriabeckham)
Skirt the line. Miss Beckham does indeed have a penchant for ladylike pleated midis and crisp button-downs — give or take some ankle-strap steppers — that speak to her inner sophisticate. (Photo via Alo Ceballos/GC Images)
Embrace epic color blocking. This color-blocking maven is proof that you can juxtapose a plum sheath dress with showstopping cerise-hued boots, and still look totally bomb. (Photo via Raymond Hall/GC Images)
Try, but don't try too hard. Here Beckham gives off major style know-how by downplaying her towering stompers with a cozy scarf and relaxed black culottes. (Photo via James Devaney/GC Images)