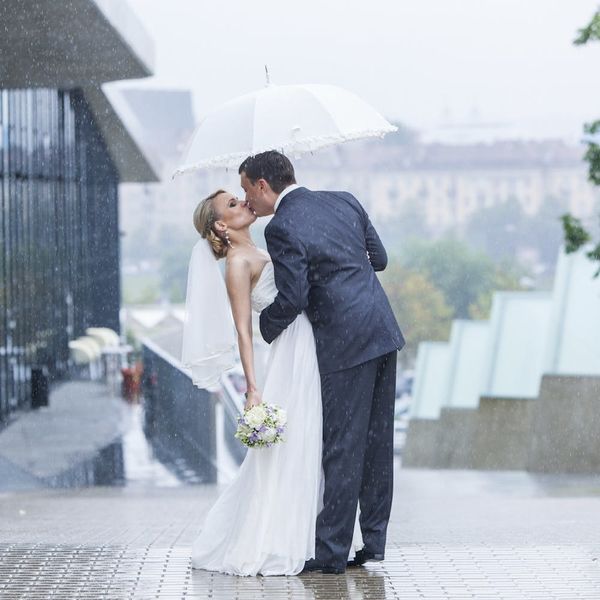 There’s nothing like a wedding to bring out love superstitions and old wives’ tales. No doubt you’ve heard at least a few of these over the years, or maybe they’re just pouring in now since you got engaged. With so many wedding traditions and superstitions, even the most laid-back bride can start to feel stifled — especially if she hates the color blue. We’ve researched the origins of some of the most common wedding superstitions to get to the bottom of it all. Read on and decide for yourself whether you want to tempt the evil spirits (apparently they’re all over weddings!) or try to catch a little extra luck. Either way, now you’ll be able to counter anyone who insists you have to wear a veil or do the bouquet toss.

1. Something Old, New, Borrowed and Blue: This one comes from an Olde English rhyme, which originally ended with “and a sixpenny in your shoe.” Something old symbolizes the bride’s past and her family, which she carries with her into the marriage. Something new symbolizes the future: the new life the bride and groom will create together. Something borrowed symbolizes borrowed happiness; on her wedding day, the bride is supposed to wear something borrowed from a happily married friend or relative, in hopes of also having a happy marriage. Something blue comes from ancient Israeli brides who wore blue ribbons in their hair on their wedding days to show their love and fidelity to their new husbands. The sixpence in the shoe is supposed to bring a lifetime of luck to the bride.

2. Wearing a Veil: There are two origin stories for the veil, and wildly different in their purposes: The first dates back to ancient Rome and the fear that a bride who didn’t wear a veil would be plagued by evil spirits who were jealous of her happiness. So the veil was a disguise to keep them away from her. The other origin story is much less dramatic and ties in to the superstition about the groom seeing the bride before the wedding.

4. Seeing Each Other Before the Wedding: This one is has to do with the fact that ancient marriages were arranged by the families of the bride and groom, usually without any say at all from the couple. In fact, the couple didn’t even meet until the wedding! The groom wasn’t supposed to see the bride until the last possible second — just in case he didn’t like what he saw. By the time the veil (the second reason for the veil) was lifted, it was too late for him to cut and run.

5. Jumping the Broom: A common tradition in African-American weddings, couples literally jump over a broom at the end of their marriage ceremony. This has roots in slavery, when slaves couldn’t legally marry each other, so jumping over the broom signified to the community that a couple was spiritually married, if not legally. But according to some traditions, jumping over the broom was also useful in making sure neither the bride nor groom was possessed by, you guessed it, an evil spirit! The spirit wouldn’t be able to jump over the broom — they would have to count all the bristles. So if a bride and groom could jump the broom, all was well.

6. Knives as Wedding Gifts: Knives are supposed to be bad luck, as they symbolize a broken or severed relationship — talk about a loaded gift. You may want to hold off on putting knives on your registry. Or, if you really want that fantastic set to add to your kitchen or someone gifts them to you out of the blue, pay the giver one penny for the knives. That way, it’s technically not a gift, since you paid for it.

7. Matching Bridesmaid Dresses: Consider yourself lucky that today, the bridesmaids only match each other. Back in the really old days, they matched the bride. This was to confuse anyone — those pesky evil spirits again, old lovers or disapproving family members — who may object to the marriage and try to waylay the bride. It was harder to target her when everyone around looked just like her. The same applied to the groom, which is why the groom and his groomsmen wear matching outfits too.

8. Rain on the Wedding Day Is Good Luck: Rain signifies cleansing and new life, which is why it’s considered lucky to have rain on your wedding day. Ancient marriages were all about carrying on the family line, so anything that would give the couple luck in starting a family was highly prioritized. This might also explain why the traditional “wedding season” takes place in the spring and summer — times of the year in which the world was in full bloom (and hopefully, the bride would soon be too). (Photo via Getty)

9. Throwing Rice, for Fertility: Yet another symbol of fertility! Grain was traditionally thrown over newlyweds as a symbol of the seeds of their future, which would hopefully sprout and “bear fruit.” Today you can throw anything from rice to sprinkles, but this has remained a popular wedding ritual for many cultures. It’s not so much what is thrown as the act of throwing that counts — so whether your friends and fam throw flower petals or glitter, they’re wishing you a joyful and bountiful future.

10. Crying on the Wedding Day: Invest in that waterproof mascara and let the tears flow, because tears on your wedding day are supposed to mean that you won’t have any to shed during the marriage. Ok, so any married person can tell you that deal is probably too good to be true. But many brides regard wedding day tears as a sign that all tears in the future will be happy ones — get yourself a cute handkerchief and lean in to those last single tears.

11. Carrying the Bride Over the Threshold: Carrying the bride over the threshold of her new home was yet another way of trying to keep her safe from evil spirits, which would lurk in thresholds. Women were also thought to be particularly vulnerable to being possessed through the soles of their feet. Also, no one wanted the bride to trip on her way into the house, as that also signified bad luck. Thus the solution was for the groom to carry his bride.

Get inspired by all our favorite wedding trends, up now on our Pinterest page!

Alexandra Tran
Alexandra has been obsessed with all things wedding since she was five. When not drooling over all things "I do," she enjoys reading, classic films and cuddling the family dog. More of her wedding musings and advice can be found on her blog www.weddingloversanonymous.com, along with her brand new book "Champagne Dreams on a Beer Budget: How I saved $20,000 On My Wedding."
Wedding Advice
Wedding Planning and Decor
Wedding Advice