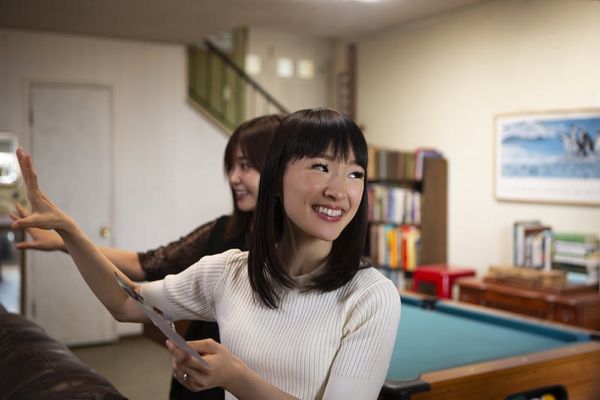 Welcome to Brit + Co’s Weekly Entertainment Planner! Each Monday, we highlight one thing we’re excited about in six categories — movies, TV, music, streaming services, podcasts, and a bonus pick from all of the above — to help you navigate your week in watching and listening. Check out our picks for the week of December 31 to January 6 below. Your eyes and your ears will thank us!

Second Act: Let’s be honest: You probably didn’t see Second Act when it opened on December 21 because you were busy seeing Mary Poppins Returns. And then the holidays happened and there was no time. But now that the celebrations are winding down and life is getting back to normal, it’s the perfect opportunity to see Jennifer Lopez as a working woman who wants more from her career. Have fun, get inspired, and find your own second act in the new year! (Photo via Barry Wetcher/Motion Picture Artwork)

76th Annual Golden Globe Awards (January 6): The 2019 Golden Globes will kick off awards season by honoring the best in film and TV over the past year. Adam McKay’s Dick Cheney film Vice leads the motion picture nominations with six nods, while FX’s American Crime Story: The Assassination of Gianni Versace leads the TV nominations with four. Sandra Oh and Andy Samberg will host, and you can watch it all go down live on January 6, 2019, at 8pm ET/5pm PT on NBC. (Photo via Trae Patton/NBC)

Tidying Up With Marie Kondo (January 1): On the first day of the new year, Netflix will release eight episodes of its new home organization reality series with Marie Kondo, creator of the famous KonMari method of decluttering your life. Watch as Kondo helps families not only get their homes in order, but also deal with difficult life circumstances as they move toward a fresh start. It’s the perfect kick-off to 2019, and you can check it out when it arrives on Netflix on January 1. (Photo via Denise Crew/Netflix)

Body Kindness: The new year often comes with resolutions to eat better, lose weight, and get in shape, and while good physical health has many benefits, it’s also important to remember that good health looks different for different people. The Body Kindness podcast focuses on broader topics in the pursuit of wellness, from “food to family to sex” and beyond. It’s an important reminder to make sure your goals are coming from the kindest place possible. Listen online, or subscribe wherever you get your audio content.

NBC’s New Year’s Eve (December 31): There are several great New Year’s Eve TV specials to help you count down to midnight, but this year, we’re going with the one that our fave Chrissy Teigen is co-hosting with Carson Daly and SNL‘s Leslie Jones. Nothing personal, everyone else! Watch it live on NBC on Monday, December 31, from 10pm to 12:30am ET/PT, with a break for local news from 11pm to 11:30pm ET/PT. Happy new year! (Photo via NBCUniversal)