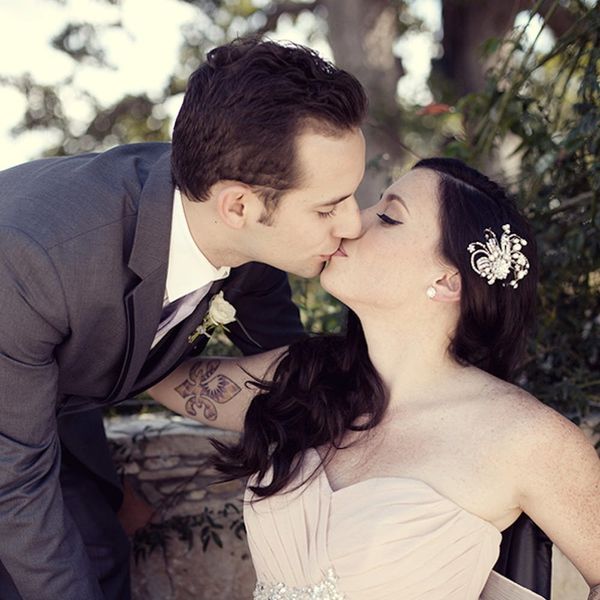 So, it’s your wedding day. Finally. And since it’s a day that carries so much significance, you want everything — and we mean EVERYTHING — to go smoothly and 100% according to plan. But sometimes, all the planning, prepping and rehearsing in the world can’t prevent a hiccup here or a speedbump there on your big day. Cue the woulda-coulda-shouldas, but don’t be too hard on yourself — there’s a reason why the word “new” is in “newlywed!” — how could you have known?

What I would have changed: “I wish I had outsourced everything possible. It is virtually impossible to handle plans on your wedding day, especially the moment the hair + makeup crew finishes and you get in your dress. I ended up forgetting to leave the tip and had to drive an hour away that week to bring it to the salon. Outsource all day-of tasks!”

What I would change: “If I could pick one thing it would be to have allotted more time for pre-wedding/first look pictures (and just pictures in general). I think it can be easy to assume an hour or two is fine, but when you are driving to different locations it really isn’t as much time as you think. It all just felt a bit rushed.”

What Lauren would change: “We would have ordered more cupcakes and apple cider donuts.”

What Olivia would change: “And more whiskey.”

What I would change: “My biggest regret is not spending enough time at my own wedding! I know it sounds strange but with two photographers and one videographer, we were being pulled in every direction the entire night it seemed. I’ll never forget walking outside for some night photos and we asked the photographer what time it was and he told us we had 45 minutes left — we were devastated! Make sure you capture all those great moments, but definitely talk to your photographer/videographer before the wedding day and tell them that you’d like to be pulled only once or twice for couples photos.”

What I would change: “I decided to have only one bridesmaid — my best friend, Natalie — because the other alternative was to have eight bridesmaids, which felt like too many for my 125 person wedding. In retrospect, I wish I went with eight because it’s just so fun to include your closest friends and make a whole day of it with hair, makeup and mimosas.”

What I would change: “I wish I had enjoyed dinner at the reception with my husband and took a minute to take it all in and have a moment with him — I never even had a piece of my wedding cake!”

When + where: Philadelphia, Pennsylvania in 2014

What I would change: “I probably should have ditched my veil as it was whipping around me and my husband during the ceremony and actually flew off my head as I walked back down the aisle. Those fun, unexpected moments created some of the best memories for me and my husband. Embrace whatever comes your way!”

What I would change: “The one thing that stood out to me was that I had my bangs down and not pinned back — it was a little windy, so pictures were a nightmare because I kept having to move my hair out of my face. I would recommend that even if a bride wears her hair down to pin back her bangs so they don’t constantly get on the way and/or stick to your lipstick!”

What I would change: “I wish I had organized the guest list, addresses and seating arrangements a little earlier than I did — I felt a bit rushed.”

(Photo via Off Beet Productions)

What I would change: “I wish we had walkie-talkies with our day-of coordinator. There was no cell reception where we got married, so there was no way for us to communicate across the property. One of our shuttles, carrying about 20 people, missed our entire wedding ceremony because of our obscure location. We would have delayed the ceremony if the coordinator had hit me up on a walkie-talkie!”

What I would change: “I would have done a first look before the wedding — we didn’t end up doing one — because it gets the jitters and pictures out of the way so that you have more time to enjoy your day!”

What I would change: “HIRE A VIDEOGRAPHER! I was on a tight budget and spent the most money on 1) a great band (totally worth it) and 2) the photographers — however to save in the end, I nixed the idea of a wedding video. News flash: I totally wish I could have a wedding video to watch over and over again. The speeches at our wedding/rehearsal dinner were truly the highlight and I so wish I captured all those moments beyond our exhausted/emotional/overwhelmed/extremely happy/best weekend of our lives memories.”

What I would change: “I wish I had a lower maintenance hairstyle because it didn’t last through the night. I would recommend an updo or braid because so many people will be hugging you and messing with your hair.”

When + where: Camano Island, Washington in 2008

What I would change: “I wish we would have written out a list of people we wanted to get photos with. I missed out on some with grandparents who are no longer with us. Heartbreaking.”

What I would change: “I wish I would have planned more time for photos or done a photo shoot the day before.”

(Photo via Make a Difference Photography)

What I would change: “I wish we had gotten more photos of us and our dog at the wedding. Also wish we had confirmed the double checking of the microphone so that announcements were clearer — I don’t think a lot of people knew about the coffee shop that was open for us for boozy coffee.”

When + where: Falmouth, Massachusetts in 2015

What I would change: “It’s important to remember that you have a videographer and photographer who are not only shooting the wedding, but also YOU the ENTIRE time. During speeches and dances when I wasn’t in the spotlight, I wasn’t paying attention to my facial expressions, which resulted in some interesting footage! I wish I wasn’t fiddling with my earrings or adjusting my dress.”

What I would change: “I would have hired my photographer for a longer shift! I love the photos we do have, but since they’re such a lovely reminder of the day, I wish we’d cut the budget elsewhere to get even more time with our amazing photographer.”

What I would change: “Eat! Try all the yummy food you picked out. Assign someone to chase you around to make sure it happens. It’s that important.”

What I would change: “Hire a professional videographer!”

What I would change: “I wish I remembered to have the bridal suite loaded with snacks and lunch for everyone while they were getting ready.”

What I would change: “I wish we had paid extra for a longer time at the venue. I also wish we would have gotten a novelty dessert like a donut + coffee food truck.”

(Photo via Round Lens Photography)

When + where: Allentown, Pennsylvania in 2014

What I would change: “Take the time to pack an overnight bag if you aren’t honeymooning the first night but are staying in a hotel suite and don’t have your honeymoon clothes. I didn’t and forgot clothes for the drive back the next day. I was stranded with only my wedding dress or my lingerie to choose from!”

Will you take these brides’ advice? Do any of these responses surprise you? Weigh in on the comment section below.

Beth Wischnia
You can typically find this Texan writing, trying on a new lipstick, gabbing with her identical twin sister or volunteering at the local animal shelter. She finds inspiration from rosé, beauty products, Tex-Mex and cats.
Wedding Planning and Decor