WTF Is an Air Fryer, and Should You Get One? 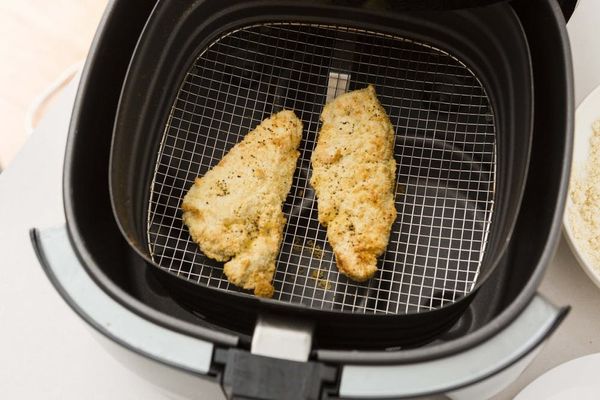 I recently had my first experience with an air fryer, and I was so impressed by the results I just had to tell the world about it. I was visiting my mom and she immediately offered me some food when I got to the house. Not wanting to make her do too much work I decided on reheated leftovers from the fridge, including some French fries. Rather than reheating them in the oven or microwave, she popped them into the Cook’s Essentials air fryer she got for Christmas. Now, my mom is a bit of a kitchen gadget junkie, so I was skeptical of this contraption. But when she pulled out the basket and I saw crispy, golden fries, I was impressed. After one bite, I was totally sold.

How did the air fryer get them so crisp? It uses a convection process to cook food, meaning super hot air is circulated by a fan to brown your ingredients. Foods cooked from scratch may require a spritz of canola oil spray, but foods that have already been cooked in oil won’t need any additional fat added. In the week that I was there, I had amazing reheated pizza (no tough-as-leather crust or hot-as-magma cheese like you’d get from a microwave) and crispy chickenless nuggets (it makes some mean vegan food), and I saw my niece get a perfectly bronzed tray of her favorite pizza rolls. My mom also uses it to make skin-on chicken thighs that get gorgeously golden-brown, and her air-fried chicken tenders have quickly replaced her former go-to recipe for oven-fried chicken.

That being said, it’s not a miracle worker on everything. I tried making French fries in it from scratch, and though some edges and ends got crispy and brown, the rest of the potato was pale and a bit mushy. (Pro tip: You have to soak the French fries in cold water for a few hours and pat them dry to get rid of the extra starch.) I also tried reheating some pasta in the machine, but it came out oddly tough as the hot air just dried it out too much. Unbreaded skinless chicken breast also came out dry and tough. The meats you make in the fryer really need a breading or skin of some kind to keep them moist inside. Bottom line:

You should get an air fryer if:

You should skip it if:

If you already have an air fryer and don’t know where to begin, this recipe for Paleo air-fried chicken tenders is a tasty place to start.

Justina Huddleston
Justina Huddleston is a food writer living in Los Angeles. When she's not busy writing, she spends her time in the kitchen creating both virtuous and decidedly junky vegan food. Buffalo chickpea pizza, anyone? She's also been known to eat a plain block of tofu or beans straight out of the can for lunch, but somehow those culinary adventures don't make it to her Instagram. You can follow Justina on Twitter or see what's cooking in her kitchen on her blog, A Life of Little Pleasures.
Adulting
Kitchen Tools and Gadgets
Adulting Kitchen Online Shopping Shopping
The Conversation
More From Kitchen Tools and Gadgets