What the Nicki/Taylor Beef Teaches Us About Arguing Online 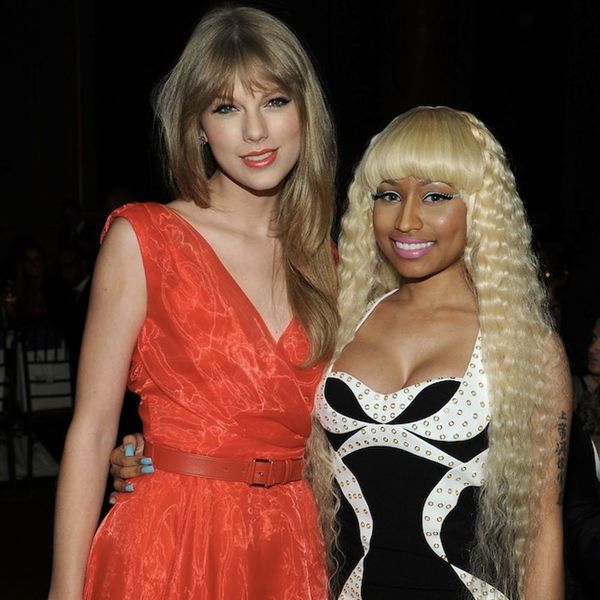 It’s been nine months since the release of 1989 by Taylor Swift and we’ve only just now gotten “Bad Blood” out of our heads (oops, jk, then we saw these costumes and got it back). Recently though we’ve seen an IRL version of that feud tune in her Twitter interactions with Nicki Minaj. For those of you living under rocks, here’s a quick run down of the beef.

If your video celebrates women with very slim bodies, you will be nominated for vid of the year 😊😊😊😊😊😊😊😊😊😊😊😊😊

Then Taylor was all:

@NICKIMINAJ I've done nothing but love & support you. It's unlike you to pit women against each other. Maybe one of the men took your slot..

And things just kind of escalated from there (special shout out to a grammatically challenged but well intended tweet from Katy Perry). The “fight” got tons of press coverage and analysis and came to a close today with T.Swift (twe)eating major crow:

I thought I was being called out. I missed the point, I misunderstood, then misspoke. I'm sorry, Nicki. @NICKIMINAJ

And Nicki accepted the apology:

That means so much Taylor, thank you. @taylorswift13 ❤️❤️❤️

I've always loved her. Everyone makes mistakes. She gained so much more respect from me. Let's move on. https://t.co/mx9pfIdnzT

This was a hard event to watch, kinda like watching your parents fight (“GUYS, STOP! I LOVE YOU!”) we’re glad it has a happy ending. Still there’s a lot to learn from this exchange when it comes to your own online habits, so here are a few things we picked up while watching it unfold.

Take a second before you react: If T.Swift had taken a breath to look over the Video Of The Year noms, she would have seen that she wasn’t the only woman on the list (Beyoncé’s “7/11” also got a nod) so even if Nicki was throwing shade at women who were nominated, it didn’t necessarily apply to only Taylor. That being said, a critical read through of Nicki’s tweet belies a frustration with the bigwigs who run the VMAs and not the artists themselves. Most online fights start because someone was too quick to jump to the defense and didn’t stop to figure out what the other was really saying.

If you see something online that bugs you, be it an opinionated article, a Facebook post or just another stupid Minions meme, give yourself two minutes to respond. Before responding think a) do I fully understand what this post is saying, and is it really about me? Follow that up with b) will I and my followers benefit from engaging in this situation, or will it only make me more frustrated? Taylor’s response reduced Nicki’s criticism of MTV to a personal attack, turning the entire conversation into a public “catfight.” Taking time to think that over may save you from endless comment wars. Fellow pop star Zendaya has more words to live by on this subject.

Think about intersectionality: Intersectionality is the concept that certain societal oppressions intersect (for example, Nicki is a woman of color, meaning she operates under society’s oppression of women and also the oppression of black culture). HelloGiggles tied this idea to the feud in a killer article saying: “Many people are hesitant to embrace intersectionality, because it means acknowledging privilege; it ‘complicates’ feminism and gender equality; and many feel it ‘distracts’ from individual issues.” The article goes on to say, “by fighting to end prejudice of all kinds, we have the potential to lift all women (and men, for that matter), rather than a select few at the expense of the rest.” This is definitely something anyone who considers themselves a feminist needs to take into consideration, the idea that there are different kinds of women (women of color, trans women, queer women etc.) facing different kinds of prejudices everywhere. Before engaging in an argument or responding to bigger issues, take a second to consider the amount of privilege of the poster as well as your own privilege.

Women of color are treated differently: They just are. A Marie Claire article put it succinctly by comparing past VMA noms and winner who have shown their naked body in videos (Miley Cyrus, Emily Ratajkowski) to Nicki. The article says”as soon as Nicki Minaj — whose black body deviates from Caucasian beauty standards — dares to own her own culture and dance in a similarly provocative fashion, it’s glossed over and relegated to sideline categories of ‘female’ and ‘hip hop.” The article goes on to say “meanwhile, white artists who adopt black culture as their own continue to reap professional awards. And it’s time to stop pretending that that’s OK.” Racism is inherent in our society (which sucks) and the best way we can fight it, regardless of skin color, is to acknowledge its existence and think critically about the ways in which culture is appropriated (looking at you, Kylie Jenner).

Grammar matters: We’re huge Katy Perry fans, but her contribution to this discussion was largely dismissed as silly because of her poor grammar. And that really sucks, considering how many men use crappy grammar online on the daily and never get called out on it. The lesson here: spell check to get respect (and maybe slip a few of these smarty pants words in for extra credit).

Take responsibility: We’re all in the process of learning and growing and with that personal growth comes the changing of certain opinions. It’s okay to feel different from one day to the next, but you have to take responsibility for things you say, especially when you post them online where they live forever. You can do this by thinking through what you want to post before you post it and also by not being afraid of admitting when you’re wrong.

How do you deal with online fights? Tell us in the comments

Molly Sanchez
Molly Sanchez is a writer, comedian and lover of burritos everywhere. She has written for The Bold Italic, Liquid Bread, Thrillist and HelloGiggles. She devotes her time to Bloody Mary research, exploring San Francisco and promoting wide spread shower beer awareness and appreciation. Find her on Twitter @seriousmolly trying to get famous people to laugh at her jokes or on Instagram @mollyfuckingsanchez where she swears a lot.
Katy Perry
Home
Katy Perry Taylor Swift Twitter
More From Home