#MotivationMonday: 8 Life Tips Zendaya Swears by That You Should Too 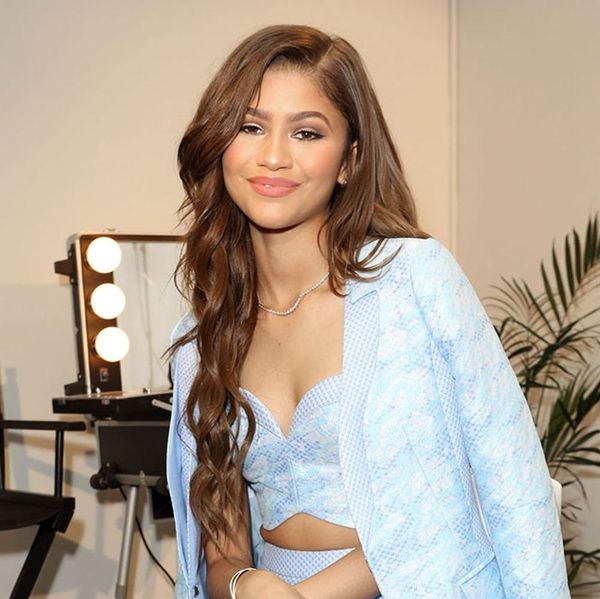 By now, we’re stating the obvious when we say Zendaya gives the realist advice. The 18-year-old singer, actress and now shoe designer is also becoming famous for her thoughtful declarations and take-the-higher-road responses to nasty comments directed at her style and beauty, which in our eyes, have always been on point. At BeautyCon LA this past weekend, Zendaya took a break from her newest music project to sit down with Editor in Chief of Yahoo Style, Joe Zee and actress Olivia Culpo for an intimate talk about how to deal with haters and staying true to you. Naturally, she slayed, tossing out life, style and beauty tips made for #MotivationMonday all while keeping things totally real. In other words, these are words to live by (+ major #preach moments) ahead.

1. We all have the power to help each other: For Zendaya, tweeting, ‘gramming and FB-ing comes with the same small social courtesies we do for each other IRL, like holding the door open for your busy co-worker or giving up your seat on the bus to someone who maybe *hasn’t* been sitting behind a desk for the last eight hours. “With social media, for me, with great power comes great responsibility, and if you think about it, all of us have so much power at our fingertips. We literally have access to the World Wide Web — we can contact whoever we want, we can say whatever we want and it’s out for millions and millions of people to see. For me, I feel responsible to use that power to send good messages and positive things, to empower other women to say ‘Hey girl, you look good today.’ So I feel like it’s so important to help each other,” she said. “My stance is to not just leverage it for myself, for selfish reasons, but for things I’m passionate about.”

2. It’s okay to not follow trends: Where exactly does Zendaya get outfit inspo? “I admire people who just do what they want to do, that either have created their own style or go against the grain. There’s people [like], say, Solange, that has created her own style and she has her own thing. It’s like, ‘Ooh, that’s a Solange look’ — you know what that looks like. Then there’s people that like to just do whatever and I’m one of those people who like to try different things. Especially when you’re young, it’s okay to experiment and to not be poppin’ all the time and not have a cute day like, okay so you tried it, it didn’t work out, try something else. That’s what I think is so important for fashion, to explore and find out who you are.”

3. Take fashion risks to switch up your image: Labels like are hard to shake off as you grow up, especially when that label is “Disney Channel Star.” For Zendaya, updating her image meant taking risks to get people to see her as less of a Mouseketeer and more of an individual. “It’s been a long process just getting people to see me in a different light. Especially when you’re a Disney star it’s like, ‘That’ girl from Shake It Up? I don’t want her in my dress!’ So you gotta build. That’s why I started taking fashion risks, and I was like ‘Oh, you don’t see me like this, you’re gonna see me like this now!’ So you experiment and you keep trying and eventually my stylist and I, we broke down a lot of doors,” she said. “It’s all growth and a process and it’s fun at the end of the day. I have a lot of fun doing it.”

4. Beauty should be super relatable: Don’t expect Zendaya to ever stick to a signature beauty look, and for good reason. “I feel like I have a responsibility to showcase more than one type of beauty. When I’m on a red carpet, I want a girl to be like, ‘Yo, I have hair like that!’ or say ‘That’s cool!’”

5. There are positive ways to deal with online haters without responding: Trolls suck. Cyberbullies are horrible. Comments can be mean (really mean), but Zendaya knows how to rise above. “There are many ways to deal with the hate, you can let it absorb and consume you or you can learn how to deal with it in the right ways. “You have to learn how to love yourself. so anything that anyone says, you just have so much love — like you’re in love with yourself so much that you’re like, ‘I’m good, I’m really good.’ And then you begin to grow and find passion for anyone behind the computer screen ‘cause you gotta realize, I don’t know those people, I don’t know what you’re going through, I don’t know your life. Literally commenting and saying something mean to me could have been the best thing that happened to you all day. So have compassion and almost empathy for whoever’s behind that screen and it doesn’t hurt you as much.”

6. But don’t be afraid of your voice: When push comes to shove, Zendaya has a gameplan for responding to haters. “I don’t respond that all much but every now and then I think, ‘it’s okay, now I can respond, now I can say something’ I’m not trying to be a hero or anything I just don’t think it’s fair I don’t think it’s cool, but I say it in a way that’s like ‘hahaha but you won’t do it again.’ So you gotta do it in a way so nobody’s feelings are hurt but you got the point,” she said. “And it’s about using your knowledge and taking the time. If it’s something that really hurt you and it’s something that you think other people are affected by, don’t be afraid of your voice. But make sure you do it in the right way. Don’t be ignorant or don’t just slander or drag somebody. Take your time, create an educated response, say something that makes sense hopefully to enlighten or educate that person instead of just to beat them down.”

7. Surround yourself with “no” guys to stay grounded: Sure your besties have your back, but according to Zendaya, the best kind of support system includes peops who love you for who you are and who can call you out when you’re being a diva. “A lot of people have a lot of ‘yes’ men, and not a lot of ‘no’ men, you know, people to tell you ‘No, that’s not cool’ or ‘Hey, you need to cut it out,’ Trust me, I have plenty of ‘no’ men.”

8. Be nice to everyone: We’re constantly meeting people, through friends, through work, through Tinder, but regardless if you’re bound to become bffs or you two just don’t click, Zendaya says she checks her ‘tude at the door. “I like to be kind. I don’t ever want anyone to have a bad taste in their mouth from me. I want everyone to leave like, ‘Yo, she was nice.’”