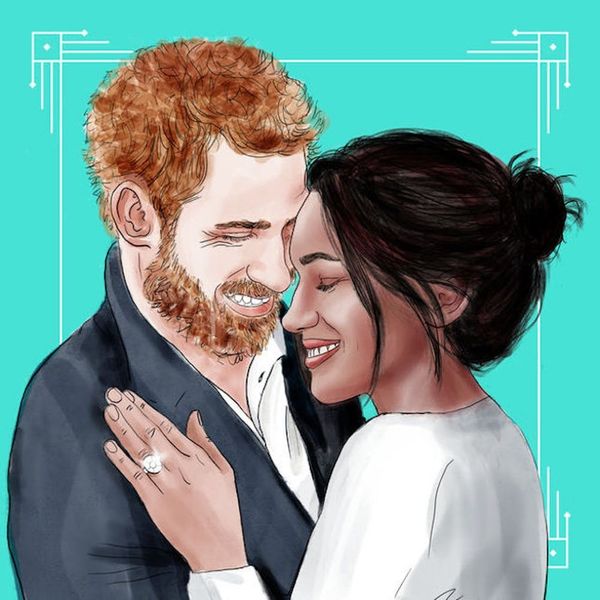 Who, us, obsessed? Sure, we’ve poured over Prince Harry and Meghan Markle’s relationship timeline, and maybe we’ve shopped all the labels that Markle has worn since the couple’s engagement, and yes, we have a countdown calendar to the royal wedding on May 19. But obsessed? I guess you can say we’re 100 percent smitten with the sweet couple, but we’re not alone! Two fans have taken their royal infatuation to the airwaves with a new Panoply Media podcast, When Meghan Met Harry.

Every week, hosts Kristen Meinzer and James Barr break down the latest royal wedding news, talking engagement rings, messy buns, and royal wedding protocol, often with guests who are just as hilarious and hyped about the couple as they are. As Barr puts it, “It’s a fairy tale, and it’s coming true. It’s the Princess Diaries in real life and isn’t it every little boy’s dream to be a princess? It is mine.” We chatted with the charming duo about guest list predictions, Markle’s infamous half-sister, and what they hope that Markle will do with her new position as a royal.

Brit + Co: We probably know the answer to this question already, but— are you both long-time royal family obsessors?

Kristen Meinzer: As is true for a lot of women on Earth, the wedding of Lady Di to Prince Charles was my first real memory of a wedding AND my first real memory of an international media event. And it was so hard to resist. It presented so many myths about what weddings, royalty, and celebrity were all about. I watched the wedding on TV as well as all the made-for-TV movies, and all the “news stories” about them with my late mom and Nanna. Notably, my mother was an anglophile (and a card-carrying member of the Eastenders Fan Club) while my Nanna just loved any form of celebrity gossip. When I was in University, I was able to do an exchange to London, where I got to see Charles and Di in real life (in their final shared appearance), which was a real treat. I’ve followed the family almost my whole life, through all the ups and downs.

James Barr: William and Harry always felt like older brothers to me. I’m just a little younger than Harry so when Princess Diana tragically left us, I imagined how that must feel losing your mum so little. I visited Kensington Palace with my mum to write in Diana’s book of condolence a few days after, and according to my step dad I was writing for ages. I wish I could remember what I’d written. I sang for the Queen with my Junior School choir at Westminster Abbey, and camped out all night at Buckingham Palace for a glimpse of William & Kate on their big day. I think it’s safe to say that I’m not just a royals fan, but a loyal subject and actually part of the family. Bow down, bitches.

B+C: Did you two have the idea for When Meghan Met Harry as soon as you heard the engagement news?

KM: James and I are both huge fans of the royal family and were watching the Meghan and Harry romance unfold before the engagement. And, of course, when the engagement was finally announced, we were freaking out. Andy Bowers, my boss at Panoply, knew we weren’t alone. He knew that millions of other people on the planet were also freaking out and would love a weekly podcast where we could all freak out together. Thus, When Meghan Met Harry was born!

JB: Much like Meghan and Harry’s engagement, it was just a regular Saturday and we were at home, roasting a chicken, when Kristen suddenly popped the question. I obviously said yes right away. We’re both so in love with “Heghan” that we had to share our excitement with everybody else.

B+C: Why do you think people connect so effortlessly with Meghan and Harry? What is it about them as people and a couple that’s so refreshing?

KM: There’s so much to connect with! I think for a lot of us, the royal family is this very closed off institution of propriety and rules, where people are being pressured to marry certain people because it’s “the smart” or “the diplomatic” thing to do. But in this current generation, we’re seeing two princes — notably the offspring of the most loved princess in British history — marry for love. And in the case of Meghan, Harry chose someone completely different than any other royal has been allowed to marry before. She’s American, she’s slightly older than him, and she’s half black. And even though she’s a famous actress, those qualities make her “more like us” than any other person who’s married into the firm.

JB: They’re so adorable I can’t even. The work that Harry and William have done in raising awareness of mental health issues in the UK has been so influential. On top of that, their resolve to help all sorts of young people is fantastic and it says a lot that Meghan and Harry’s first 2018 public appearance together was a community radio station doing both of those things.

B+C: Can you talk a little bit about why you think Meghan has the potential to be such a transformative figure for the royal family?

KM: We can’t ignore the issue of race. For hundreds of years, the royal family has been very, very, very white. Far whiter than England. Far whiter than the commonwealth. With Meghan, the royal family resembles the people a tiny bit more (though, of course, she’s far better looking than most of us). Also, the fact that Meghan — as a divorcee — was even allowed in is thoroughly modern. It’s as if the queen looked at her kids (three out of whom are now divorced) and said, “you know what, I need to let them make their own decisions.” I love the idea of the Queen having a change of heart, and the idea that Meghan was central to that.

JB: I’m 100 percent with Kristen here. It’s amazing to see the Royal family “loosen” up a little. Plus I’m secretly hoping that Meghan will give birth to their baby in the USA. Here’s to a Windsor Presidential race in the future!

B+C: Let’s talk wedding plans! Do you have any predictions on how Meghan and Harry’s wedding will be different from William and Kate’s?

KM: It’s going to be smaller, since it will be at Windsor Castle, which only holds 800 people, instead of Westminster Abbey, which holds up to 2,000 people. But it will also be a bigger deal, as it will see the intersection of continents, celebrities, royals, and a more plugged-in media age. Remember: When Wills and Kate got married seven years ago, far fewer people had smartphones, Facebook, and Twitter. Snapchat didn’t exist. Yes, there was a 24-hour news cycle, but it was nowhere near the level it is now.

JB: My feeling is that this is more of a party. With Harry not in direct line to the throne, he can let loose and have a little fun. I’m not expecting his Vegas trip or any questionable outfits though ;). Save that for the stag, Harry.

B+C: What about dress predictions? What would you love to see her in?

KM: I’d love to see her in an off-the-shoulder gown. Something that is classic, but with a modern twist and clean lines. If Audrey Hepburn were alive today, it would be a dress she’d approve of.

JB: Okay for me, it’s Carrie in the SATC movie wedding dress, but before all the drama kicked off. Or a Fitz Bernaise like in Bridesmaids? All of my wedding dress references are based around amazing diva movies.

B+C: Can you share some of your guest list predictions? Will the Obamas be there? The cast of Suits?

JB: Ed Sheeran has to perform, or Sam Smith, or both. I wouldn’t be surprised if Beyoncé turns up. There’ll be a flurry of Harry’s rumored exes in tow too.

B+C: Speaking of Samantha, what do you make of her recent press interviews?

KM: I think Samantha is an opportunist looking for a few minutes of fame. She is trying to ride the coattails of her younger, more successful, more beautiful sister, and make a buck giving any kind of interview she can.

JB: Oh you mean old what’s her face “I’VE GOT A BOOK OUT BY THE WAY” older sister? Yeh. I think she’s hilarious. Make that money, bish.

B+C: Do you have any ideas of how Meghan will use her new position and title once she and Harry are married?

KM: She’s obviously been a women’s rights activist since she was a young girl, all the way up to her recent work as a UN ambassador. She’s also been quite vocal about her support for animals. And she’s been a voice for the poor and disenfranchised. I see her being a great voice for all these causes.

JB: I’m genuinely so excited to find out. I’m expecting Meghan to do a lot of work with mental health, animal, and environmental organizations.

Which part of the royal wedding are you most looking forward to seeing? Tweet us @BritandCo and let us know!