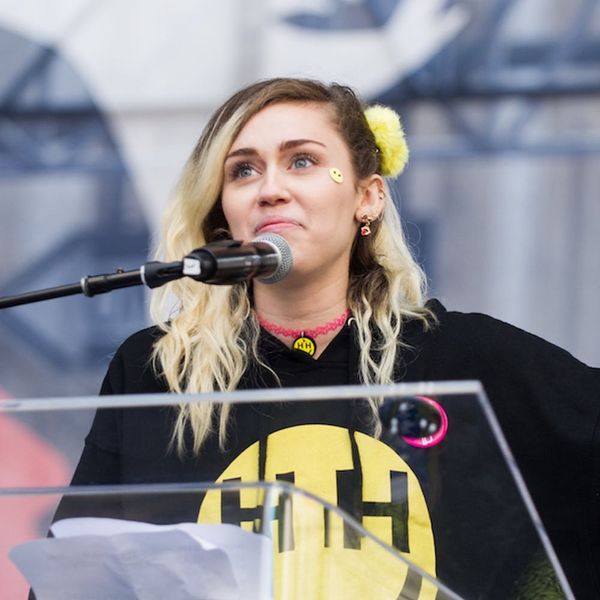 Miley Cyrus has come a long way from her (not-even-that-long-ago) Disney star roots. From pop-star controversy to LGBTQ and homeless youth activism to being a music industry mentor, she lives proud and out loud while always making one thing really clear — she DGAF what others think.

She hasn’t been shy about being political either; she was one of many celebs who enthusiastically supported Hillary Trump during the 2016 election, she recently spoke at the Los Angeles Women’s March and one look at her current Instagram and Twitter feeds makes it clear that she doesn’t support President Trump’s administration. In fact, she might even postpone her wedding to Liam Hemsworth until President Trump is out of office.

Recently, Miley couldn’t help but notice that Malia Obama attended the Dakota Access Pipeline protest in Salt Lake City during Sundance, and not only was she excited to see her there, but she went ahead and suggested that Malia should run for president someday.

“I HOPE this little baby runs for Prez!,” Miley wrote. “You’ve got my vote!!!!!” It became clear in President Obama’s final weeks in the White House that people would NOT be mad if Michelle Obama ever decided to run for office. She sadly said it wasn’t something she ever planned on doing, but Malia hasn’t yet said the same in response to Miley’s endorsement.

Over the years, Malia has been subject to scrutiny and criticism as any president’s child is, but she’s also been quietly trying to figure herself out through college and cool internships — like any normal teen would do. While it seems as though her interests at the the moment lean more toward the entertainment industry than politics, after her recent protest appearance, we’re not ready to rule out a presidential future for her just yet.

Would you like to see Malia Obama run for president someday? Let us know over @BritandCo!