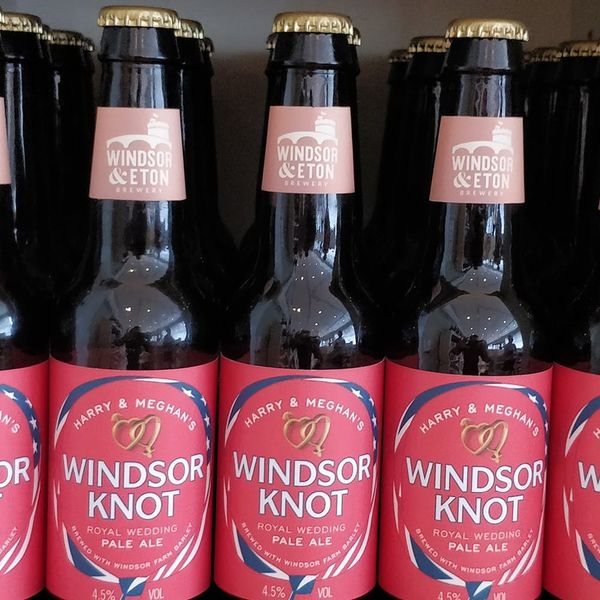 In honor of the upcoming royal wedding between Prince Harry and Meghan Markle, Windsor & Eton Brewery has created a new pale ale beer called the Windsor Knot, which marries British and American hops (Aww! How symbolic!). Also worth noting, the brewery happens to be located very close to St. George’s Chapel in Windsor Castle where the actual wedding will take place. Because this is too good to be true, we gathered all the info we could and spoke to the brewery to learn all the details about this very special ale.

To add a bit of a celebration element, the pale ale contains a Champagne yeast, along with the British and American hops. Willie Calvert, co-owner of the Windsor & Eton Brewery, told People. “We’re using some nice, fruity hops from Yamika in Washington State and some English hops, which are more subtly flavored. English hops tend to be more of a grassy, textured flavor — a bit more like hay — whereas New World hops have more sunlight and are more strongly flavored.” Adding another layer of symbolism, the English hops are Invitica, “in recognition of Prince Harry’s role in creating the Invictus Games,” said co-founder Paddy Johnson to Bar Magazine.

Even the bottle design is a tribute to the American and British union, with a tie made out of the Union Jack and American Stars and Stripes. “We chose the interlocking symbols to reflect the strength and support they give each other,” reads its official website.

The beer comes in both 330 milliliter bottles at 4.5 percent ABV and in a cask at 4 percent ABV. Anyone eager to try the pale ale can buy it at Windsor Farms starting on March 28. The beer will also be available at participating pubs in both London and Windsor closer to the wedding.

British fans of the royal family (or beer) will have extra time to guzzle the ale too. U.K. residents will enjoy extended bar hours on May 19, the day of the wedding. Instead of the usual 11 pm cutoff time, bars and pubs across England and Wales will have permission to stay open until 1 am that day, according to the BBC. That goes for the day after the wedding, too.

This isn’t the first time that Windsor & Eton Brewery has made a royal-themed beer. The brewery also made special-edition beers for Prince William and the Duchess of Cambridge’s wedding back in 2011, which was also called the Windsor Knot. More recently, the brewery created drafts called Royal Cot and the Royal Tot in honor of the recently-born royal babies.

What are you most looking forward to about Prince Harry and Meghan Markle’s wedding? Let us know @BritandCo!

(Photos via Windsor and Eton Brewery)