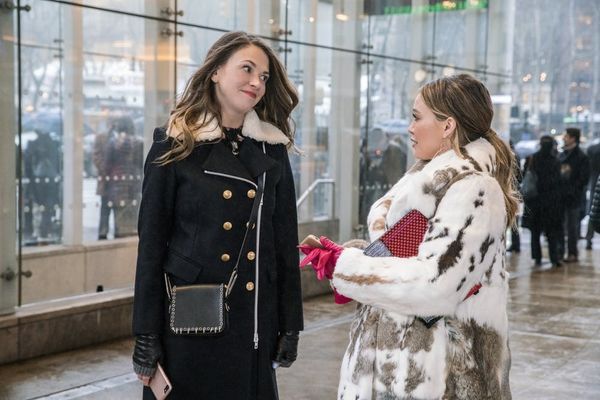 Season 6 of Younger is still two months away, but fortunately for us, TV Land just debuted a brand-new trailer that we can obsessively rewatch and analyze in the meantime. The teaser features both footage from upcoming episodes and behind-the-scenes interviews with creator Darren Star and cast members including Sutton Foster (Liza), Hilary Duff (Kelsey), Miriam Shor (Diana), Debi Mazar (Maggie), and Nico Tortorella (Josh).

1. Charles and Liza are still going strong-ish. We were a little concerned by the looks on their faces in the season 5 finale, when Charles stepped down as Empirical’s publisher to give his relationship with Liza a fighting chance, but for now, at least, they’re still enjoying each other’s company. Which is not to say they don’t have problems. For one thing, Charles is not thrilled by Liza’s “child-sized” bed. And there may be more serious obstacles to come.

“Charles and Liza’s relationship gets a lot more real,” Star says. “There’s no such thing as a perfect relationship. So this relationship has a new set of issues as it grows.”

2. Claire’s sudden reappearance is going to turn Josh’s life upside-down. As we learned at the end of season 5, Claire is pregnant, and she says Josh is the father. Maggie, for one, thinks Josh should ask for a paternity test, and although he balks at the suggestion at first, it looks like he ultimately decides to follow through on it. In one scene, we see Liza and Kelsey approach Josh and ask if he’s okay. “Yeah, I guess,” he replies. “I got the test results back today. And…” (What comes after that “and,” Darren Star?!)

3. The pressure of Kelsey’s promotion is going to start to get to her. “I think she’s going to feel the weight of her responsibility,” Star says of Kelsey’s new role as publisher. And indeed, there’s a scene in the trailer that shows Liza trying (and failing) to reassure her friend that she can handle the job. “Finances are cratering here,” Kelsey frets. “Okay, why not find someone to blame, fire them, and then restructure?” Liza assures her that “no one is firing” her, but Kelsey isn’t convinced.

4. On a happier note, there’s some singing in our future! Foster and Shor both have musical theater backgrounds, and Duff gave us classics like “Come Clean” and “So Yesterday,” so it was only a matter of time before we got “I’m going to be singing again, which makes me feel like my parents maybe called Darren Star and were like, ‘We want her to sing again. We loved it.'” (Shor previously performed “Willkommen,” from the musical Cabaret, in a season 5 episode about the team’s trip to the Frankfurt Book Fair.)

“Look, we have an amazingly talented cast,” Star teases. “There are reasons why the characters are singing. And it’s fun to find them!”

5. This season will be the most dramatic one yet. “There’s a lot of drama this season — probably more than any other season,” Star says. Adds Foster: “The world of Younger is more exciting than ever. In season 6, the stakes are so high. So many of our characters have finally gotten what they wished for, but is it exactly what they thought? Is it exactly what they wanted? It’s going to be a roller coaster of a season.”