WHAT?! NYC Marathoners Are Getting the Coolest Techy Prize Ever 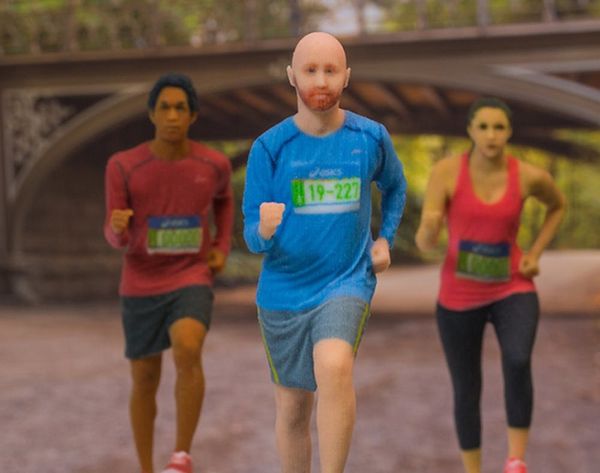 26.2 miles is a long way to run. If you’re going to commit to a marathon you’re definitely going to need some motivation to keep you going after your legs have turned to jelly — and we mean something more than crunchy aluminum jackets and some free energy bars. We’re thinking something more like a personalized, 3D printed statue.

Lucky for NYC Marathon runners, that’s exactly what they’re getting. Well, some of them anyway. Marathon sponsor Asics 3D printed 550 mini-statue replicas of actual runners who competed in this year’s NYC Marathon as a way to commemorate their efforts. 550 comes in at only 1.1 percent of the marathon’s 50,000 runners, but still, it’s better than nothing.

So who are the lucky runners to get these sweet statues? Asics, the brand behind this initiative, set aside 500 statues for the first folks to respond to an email that was sent out to all registered runners, asking them to submit a personal photo to minimarathoner.com. Not surprisingly, all 500 trophies were claimed the same day the email was sent.

Thanks to @AsicsAmerica for my own @nycmarathon #minimarathoner! Granted, she’s nowhere near as sweaty as I’ll be. pic.twitter.com/NLSquFcg4b

The other 50 statues went to the winners of a different kind of a marathon — a “Tweet-athon mini-marathon.” Essentially, the runners with the most tweets including their handle and the hashtag #minimarathoner snagged the rest. If you were wondering why there was less signage this year compared to others, supporters might have been doing most of their rallying on Twitter.

1.1 percent may seem a little frugal for such a massive event, but these little guys aren’t particularly easy to create. Each 4-inch statue takes about two days to print. A multitude of printers were employed to get all the statues completed in time for the big day — and before any printing even begins, all the 2D images submitted by the runners must also be converted into three-dimensional printable renderings by a team of 3D artists.

While the service is only available for a small fraction of race participants this year, we’re seeing customized goods like this becoming a whole lot more common as we continue to master the art of 3D printing. Those generic medals are going to start to look a little sad next to a fully colorized, miniature version of you epically crossing the finish line.

What’s the coolest thing you’ve seen 3D printed lately? Share you finds with us in the comments!

Cortney Clift
Cortney is the senior writer and special projects editor at Brit + Co. She typically covers topics related to women's issues, politics, and lifestyle. When she's not buried behind her computer you'll find her exploring New York City or planning her next big adventure.
3D printing
Health
3D printing