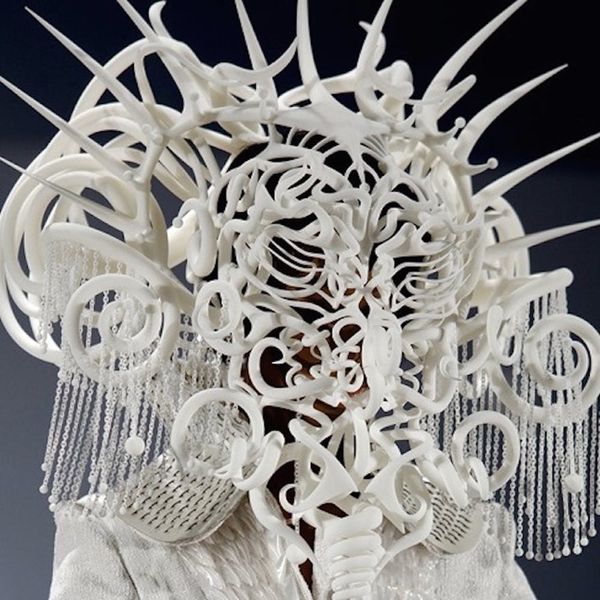 The highlight of this year’s 3D Print Design Show was, of course, the fashion show, which showcased the latest in 3D fashion from talented designers who are proving themselves to be the front runners in transforming the way we view clothing production. In their minds, with the help of ever-advancing 3D printing technology, sewing machines are NOT required.

1. 3D Head Gear: Heidi Lee has long been making things that look like they jumped out of the Blade Runner costume trailer. Lee turned heads at the recent 3D Printing Convention with her latest Endless Echo Hat, a 3D print scan of her own face. Fashion junkies might already be familiar with the press Lee got when she wore it to the opening night of the Bjork MoMA exhibition. (Photo via Gothamist)

2. 3D Wearable Art: Joshua Harker, artist, sculptor and what he refers to as “digital adventurer,” is making futuristic headpieces that have a bit of historical influence as well. The interwoven plastic headdresses pay homage to traditional ceremonial headdresses of Native American and African tribes. (Photo via Joshua Harker)

3. 3D Fabrics: Bradley Rothenberg is being called the 3D printed fabric guru. And yes, he truly is a pioneer in the land of fabrics and textiles. His 3D fabrics are being turned into highly sought after, wearable lines of clothing, like this clean, fresh-looking tank top. (Photo via 3D Printing Industry)

4. 3D Gowns: Malaysian Designer Melinda Looi collaborated with Belgium 3D printing house Materialise to produce and showcase her latest collection, “Gems of the Ocean.” The collection features one of the world’s first full-length, fully assembled 3D gowns. Printed in a single part, it was dyed and covered in over 5,000 Swarovski crystals. (Photo via Materialise)

5. 3D Neckwear: With a background in 3D modeling and animation, designer Rachel Nahn is sticking to what she knows. The stunner on her latest garment is a high fashion, Mad Max-type 3D neckwear design assembled from 14 separate interlocking pieces of ABS Material. (Photo via Rachel Nahn)

6. 3D Masks: These organic structures seem to ebb and flow from the wearers’ face like a colorful sea anemone. Designed by digital artist Helena Luksova and designer Denisa Nova, these fifteen different masks relate to the “Cordyceps” species of fungi, whose spores attack living hosts and grow into beautiful structures as they take over. (Photo via 3D Print Show)

7. 3D Accents: The Lysis Collection incorporates 3D printed neckpieces, hems and sleeves into their line of edgy pieces that feature dark-colored meshes and raw leathers. The pieces are printed on white nylon shapeways that are sanded, dyed and finished by hand. (Photo via Alexis Walsh)

10. 3D Footwear: Sols is redefining orthotics in a whole new, technologically savvy way. Their custom footwear is created by capturing 3D image perspectives of your feet and turning them into customized 3D impressions that contour to your every movement. The software even accounts for biomechanical misalignments. It’s your own personal smart shoe! (Photo via The Needs)

Have you spotted any new 3D fashion trends? Let us know what new technology and fashion blends we should be scoping out in the comment section below.

Ginger Rudolph
Ginger is a pop culture enthusiast and avid art appreciator. She spends entirely too much time watching Sci-Fi and listening to podcasts. She currently lives in Philadelphia, PA, where she writes and wanders the streets from coffeehouse to coffeehouse.
3D printing
Tech
3D printing
More From Tech