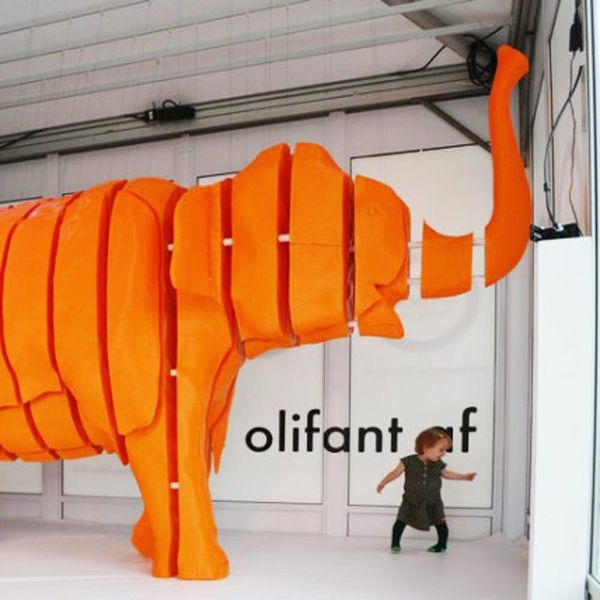 The 3D printing world has gotten some awesome updates this past month that we want to fill you in on. We’ve gathered 11 pieces of crazy awesome news that are stirring up talk about new filaments, printable clothes and 3D printing advancements. Fellow makers, we’re going to have to all brace ourselves, because by the end of this post we’re going to want to design, print and DIY everything in sight.

1. Worldwide Special Filament Workshop: 3D Hubs teamed up with Colorfabb and started their Special Filaments Workshops in Amsterdam and New York. At the workshop, visitors could print out their creations using Colorfabb’s latest carbon fiber filament, and everyone left with a Colorfabb sample pack. And because it was a huge hit, 3D Hubs is going around the world with Colorfabb and 3DPI to bring these workshops to everyone. Some cities that are set for sure are London, Stuttgart and San Francisco. You can get all the logistics from 3D Hubs’ event page. (Photo via 3D Print)

2. WhiteClouds’ 3D Models: WhiteClouds is known for their architectural models, and recently they printed out a realistic-looking model of a kitchen that shows blended granite tops, beautifully tiled flooring and stainless steel appliances. This means the future of design might lead to accurate 3D-printed models, which can be used as “model homes,” where home buyers and people who want to renovate their house can see what the final product will end up looking like. (Photo via 3D Print)

3. Makerbot Desktop 3.6: The latest Makerbot update is available, and it has three new features. There’s now a Z-axis offset adjustment that gives you more fine-tuned control, remote printing and monitoring and more detailed first-run experiences. There are various bug fixes that will surely make all your 3D printing and designing a little easier. The upgrade is available for Windows XP, Windows 7/8, Windows 8.1, Linux and Mac OSX (Snow Leopard and Lion). Get it here. (Photo via 3D Print)

4. Memento: Autodesk released the beta version of their desktop program that scans photos and prints out a 3D model of the picture it took. It’s free for now, so be sure to check it out. It’s super user-friendly for newbies, but it has advance functions as well. (Photo via 3D Print)

5. Made in Space: Remember when the first 3D printer was taken into space? Well since then, there have been pre-designed models that astronauts could pick and choose from to print in space. Kind of like a Shapeways, but for astronauts. Forgot a ratchet? No problem, just print one! Recently, there have been 12 new additions available on their Sketchfab page, and no, you don’t need to be in space in order to put these prints to use. But keep in mind that they were specifically made for astronauts. (Photo via MadeInSpace)

6. 3D Titanium Implants for Dogs: 10,000 dogs have been relieved of their cruciate ligament condition by a TTA Rapid Implant procedure. This health condition can cause pain, swelling and limping, but 3D Systems’ 3D titanium implants got these dogs back on their feet and running happily again. Way to make life way less “ruff,” 3D Systems! (Photo via 3D Print)

7. Z-Unlimited: Ever wanted to 3D print something huge? This Kickstarter is an Ultimaker 3D printer add-on that allows you to print to great heights, literally. The Z-Unlimited will be funded on April 11, but until then, be sure to check out all the perks you can cop with a pledge on the Kickstarter.

8. Twindom Family Figurines: Getting a family portrait is so ‘90s. With Twindom, you can pose for your family picture and go through a quick scan, and you’ll have a figurine to decorate the house with. It sounds kind of creepy, yet awesome at the same time. (Photo via Twindom)

9. Emerging Objects’ Latest Project: University of California, Berkeley and Emerging Objects recently revealed the largest powder-based 3D printed object. It’s 9 feet high and 12 feet wide. This work of art is actually laying the foundation for a new way to build. The structure was made from salt, paper, chocolate, nylon, acrylic, wood and cement polymer. It sounds weird, but this mixture is cheaper than traditional building materials, and it doesn’t require such extensive physical labor. Emerging Objects wants to run with this idea and eventually come up with materials like flexible and lightweight concrete, and even 100% recyclable concrete. That way, if a natural disaster happens, we can use the debris to rebuild cities instead of getting stuck with a huge clean-up project. (Photo via Emerging Objects)

10. Happy 100th Birthday Coca-Cola: To celebrate Coca-Cola’s first century, Shapeways has 3D-printed 500 iconic Coke bottles that will be hung as decoration in Atlanta’s High Museum of Art. You can see it all at the Coca-Cola bottle exhibition. (Photos via 3D Printing)

11. BodyLabs is 3D Printing Clothes: BodyLabs released the beta version of BodyKit, a program that can virtually simulate any body type. That way, when you’re 3D printing out a new wardrobe, all your clothes are perfectly made to fit your body. Looks like we’ll all be able to print out our own Kinematic Dress soon. (Photo via 3D Print)

What are you most looking forward to in 3D printing technology?

Stephanie Chon
As a spoken word fanatic, Stephanie enjoys journaling about her day using imperfect rhymes. In her free time, she likes to dance, watch random episodes of How I Met Your Mother and play her ukulele.
3D printing
Tech
3D printing
More From Tech