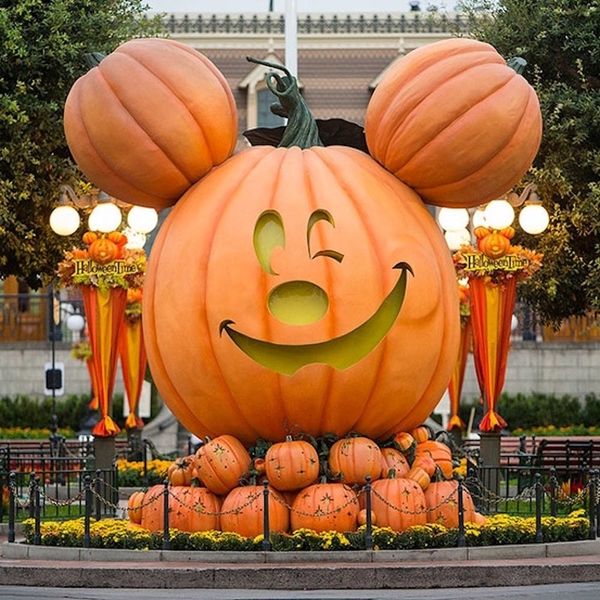 While any time is a good time to go to Disneyland, Halloween is extra special (and delightfully spooky). Mickey’s Halloween Party takes place over 17 nights (from September 23 to October 31), and the happiest place on Earth goes through an epic transformation with oodles of candy, over-the-top costumes (hello, Hocus Pocus squad goals) and experiences and entertainment that are ONLY available during this time. Eat the delicious Disneyland dishes, ride the rides and celebrate Halloween time in full-on Disney style. Note: This is a separate admission than the regular park ticket, and it sells out fast!

1. The Epic Costumes: This is the only time us adults can dress up in oh-so-awesome costumes and visit the most magic of kingdoms. During the rest of the year, you might go to the park in a subtle Disney-bounding ensemble, but if you want to dress head-to-toe as Cinderella (from glittering tiara to crystal shoes), this is your time to shine. There’s tons of inspo out there for costume ideas, from more obscure Disney characters like Gadget Hackwrench to the magic carpet from Aladdin. One of the most amazing things about Mickey’s Halloween Party is seeing all the crazy clever and beautifully executed costumes attendees wear.

2. The Parade: The Headless Horseman of Sleepy Hollow makes his Disneyland debut this Halloween season when he kicks off the brand new parade fittingly entitled the Frightfully Fun Parade. During this eerie procession, Jack Skellington of The Nightmare Before Christmas will bring along residents of Halloweentown, Dr. Facilier from The Princess and the Frog will summon his Shadow Men and the Haunted Mansion will come to “afterlife,” with ballroom dancers, gravediggers and, of course, the hitchhiking ghosts. Other parade crashers include villains such as the Evil Queen, Jafar, Cruella and more. (Photo via Disney Parks)

3. The Themed Halloween Dinner: During these special party nights, The Blue Bayou restaurant in New Orleans Square (with a gorgeous view of Pirates of the Caribbean) is holding a Halloween Dinner, a “bewitching three-course” feast. Included in your meal booking is preferred viewing at the Frightfully Fun Parade, and who doesn’t loved preferred seating?!

4. The Villains: If you have a thing for villains, then you’ve gotta make it out to the soiree. Not only will popular baddies like Maleficent, Captain Hook and the Evil Queen be in attendance, but you might spot characters that aren’t in heavy rotation, like Lady Tremaine from Cinderella, the Queen of Hearts from Alice in Wonderland, Hades from Hercules and Claude Frollo from Hunchback of Notre Dame.

5. The Fireworks: Things explode and get spooky during Halloween Screams, a fireworks show that is exclusively available to those lucky guests at Mickey’s Halloween Party. Jack Skellington is the “Master of Scare-omonies” for the pyrotechnic performance honoring everyone’s fave villains from Ursula to Maleficent. (Photo via Disney Parks)

6. The Cadaver Dans: We all know that the Dapper Dans are AMAZING but when they transform into the Cadaver Dans, they’re even more so. The quartet belts out haunted harmonies with songs from The Nightmare Before Christmas to the Grim Grinning Ghosts from the Haunted Mansion. (Photo via Disney Parks)

7. The Treats: If you have a sweet tooth, then this party REALLY is for you. Throughout the park there will be treat stations where you can load up on mini chocolate bars, various candies and even healthy snacks like apple slices. And when I say “load up” I mean it — no tricks, you will leave with a hefty bag of treats. (Photo via Disney Parks)

Have you gone to Mickey’s Halloween Party before? Tweet us @BritandCo and let us know!

Sunny Chanel
Sunny Chanel is a freelance writer as well as the founder of the whimsical site Wonder and Company. When this proud San Franciscan isn't writing, working on her fixer-upper or doing crafts, she is playing dress up with daughter and planning her next trip to Disneyland.
Halloween
Travel
Halloween
More From Travel