#VacationGoals: Travel to ALL 6 the Disney Parks Around the World 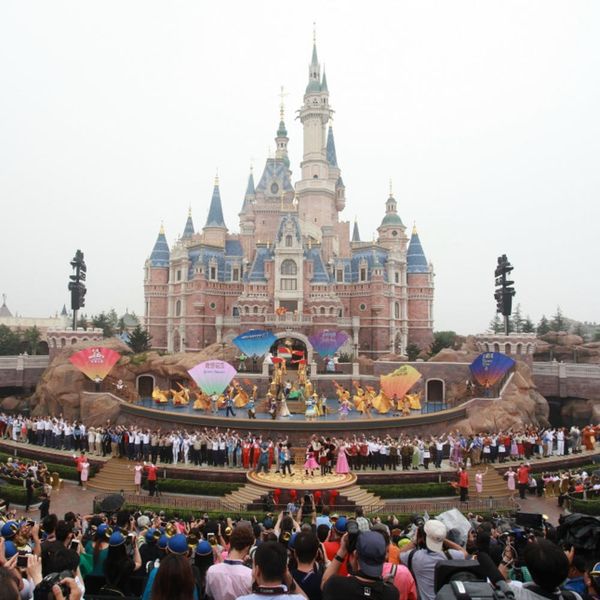 If you love Disneyland as much as most of us love Disneyland (celebs included), then you probably daydream of not only hitting the US parks, Disneyland AND Walt Disney World in the same year, but visiting ALL the Disney Parks across the globe (and maybe throw in a Disney cruise for good measure). The recent opening of Shanghai Disneyland marks the sixth park competing for the title of the “happiest place on Earth.” But in this race, with all of the elements that are relatively the same (major castles, Main Streets and Minnie + Mickey), plus some that are totally unique, each park really does come out a winner. Here’s what you need to know about each park and why you definitely should go to them all.

Disneyland is the OG Disney park — the place where it all began back on July 17, 1955, in what was once home to acres of orange groves. Disneyland is the ONLY park that Walt Disney, the man who started it all, ever stepped foot into, and you can really feel the Walt presence everywhere — from walking down Main Street and grabbing a sundae at the Horseshoe Review (where he and his wife Lily celebrated their 30th anniversary), to peeking up at the apartment Walt had above the firehouse. This park is the sacred map for all the Disneylands and Magic Kingdoms that came after it.

Stay here: To really experience the Disneyland of yore, stay at the swanky Disneyland Hotel. The gorgeous Grand Californian and Paradise Pier hotels are also on the grounds. Wherever you stay, make sure to grab a drink at Trader Sam’s Enchanted Tiki Room.

Price for one day:Approx. $155 for a one-day Park Hopper pass

Walt Disney World is MASSIVE. To put it in perspective for you West Coasters, Disney World takes up over 40 square miles. That’s almost the same size as San Francisco (which is 49 square miles). While people on the West Coast flock to the much more intimate Disneyland, those on the East Coast think of Disney World as their park.

What to do that’s unique: Monsters Inc. Laugh Floor, the Swiss Family Robinson Tree House, the PeopleMover and Seven Dwarfs Mine Train (all at the Magic Kingdom), the Great Movie Ride (Hollywood Studios), the American Adventure (Epcot), all of Animal Kingdom and the two water parks.

Stay here: Disney World has sooooooo many awesome hotel options, you almost can’t go wrong. You can check out the whole list of 25 different hotels here. Our faves include Disney’s Polynesian Village Resort (for the tiki action), Disney’s Wilderness Lodge (for its rustic charm), Disney’s Contemporary Resort (for its Mary Blair murals) and, last but not least, the Disney’s Animal Kingdom Lodge for the views of their savannah.

Price for one day: Approximately $160 for a Park Hopper pass (depending on dates)

Welcome to Disneyland France! For DisneyBound meet-up info, head over to @disneyboundfrance! Check out the story all day to hangout with me at the park from wherever you are around the world! It's a small world after all! ✨🇫🇷 #disneybound #Disney #disneylandparis #Disneyland #fashion #beautyandthebeast #travel #disneystyle

When Disneyland Paris first opened, it wasn’t an immediate success. But that’s changed, and now it’s très popular. In fact, many world-traveling Disney fans declare it their favorite Disney park for its charm and style. The park is just 20 miles east of the center of Paris and is the most visited theme park in Europe.

Price for one day: Approximately $58 for a park hopper (basically Disneyland Paris is a total DEAL)

Hong Kong Disneyland opened in 2005, and the designers took a whole lotta care into incorporating Chinese culture, customs and traditions. Disney even strictly adhered to the rules of feng shui throughout the park. The park stays true to the classic Disneyland scheme and includes seven areas: Fantasyland, Adventureland, Tomorrowland, Grizzly Gulch, Mystic Point, Toy Story Land and, of course, Main Street, USA. Compared to the other grandiose parks, Hong Kong Disneyland is kinda small, but it’s only about 15- to 20-minutes from the airport, so it’s easy to make a visit.

Number of parks: One

What to do that’s unique: They have a completely unusual Haunted Mansion called Mystic Manor, which is inhabited by the home of Lord Henry Mystic, an adventurer, and his adorable and mischievous monkey, Albert. They also have the Big Grizzly Mountain Runaway Mine Cars, which is kindof like the Mine Train ride at Walt Disney World.

Price for one day: Approximately $70

Tokyo Disneyland was the first park to be built outside of the US, holding its grand opening in April of 1983. It’s always been wildly popular and a huge draw for tourists from Japan and beyond. It’s actually the second most popular park (not just Disney — theme park, period) in the world (right after the Magic Kingdom in Walt Disney World).

What to do that’s unique: At Tokyo Disneyland, instead of New Orleans Square and Frontierland, they have the World Bazaar and Westernland. And ALL of DisneySea is unique, with its various lands that include the Mediterranean Harbor, Mysterious Island, Mermaid Lagoon, Arabian Coast, Lost River Delta, Port Discovery and the American Waterfront.

Price for one day: Approximately $75

The newest of the Disney Parks opened in Shanghai, China in June 2016 to much anticipation. This park, the first of its kind in mainland China is, as Bob Iger, CEO of Disney says, “authentically Disney and distinctly Chinese.” They hired Chinese architects, designers and oodles of researchers to find ways to seamlessly incorporate Chinese cultural elements. Not only is that a nod to the millions of future Chinese visitors, but that means non-Chinese Disney lovers will satisfy their love of Disney and have a cultural experience.

Number of parks: One

What to do that’s unique: This park has a few new types of lands: Gardens of Imagination, Adventure Isle and the totally cool Treasure Cove, a Pirates of the Caribbean-themed area. A few of the unique must-do rides include TRON Lightcycle Power Run, Pirates of the Caribbean — Battle for the Sunken Treasure, Voyage to the Crystal Grotto and Camp Discovery: Challenge Trails.

Price for one day: Approximately $75

Which Disney Park do you want to go to most? Tweet us @BritandCo and let us know!