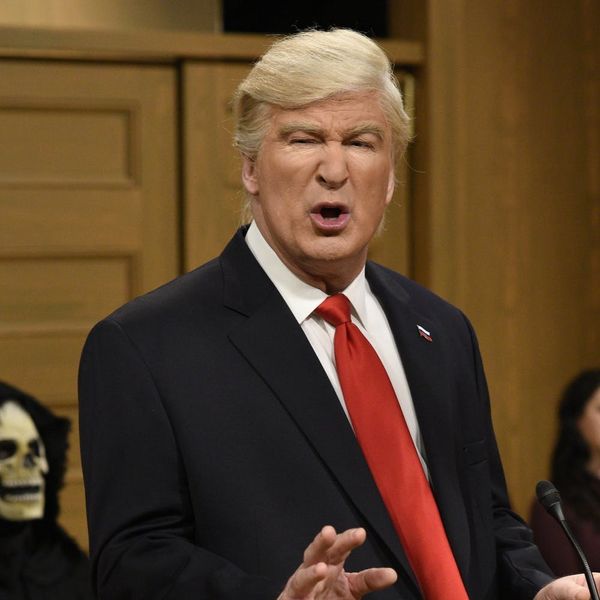 It may only be February, but already, it’s shaping up to be quite the politically charged year. With the media and the administration at odds, executive orders bringing about important changes, and general confusion (WTF is going on with President Trump and Russia, for instance?), it’s safe to say that we’ve all been in need of a little comic relief. Luckily, one show in particular has had our backs in that regard every step of the way, despite any flack it may have received from the President himself: Yup, we’re talking about SNL. Check out our fave moments from the last year below.

9. When Leslie Jones Tried to Replace Alec Baldwin As President Trump: We totally get it: Everyone on SNL wants to have a hit, recurring character. But sometimes, impressions don’t quite translate, even as hard as the cast members might try. Poor Leslie Jones just can’t seem to catch a break when auditioning for the role of Donald Trump, with even show producer Lorne Michaels turning her away from his office, but luckily for us, her frustration translated into pure comic gold. (Photo via Will Heath/Getty)

8. When “KellyAnne Conway” Couldn’t Catch a Break: Though some of Kate McKinnon’s more recent KellyAnne Conway sketches have veered into darker territory (see: Her Glenn Close Fatal Attraction style skit with “Jake Tapper,”) we love this lighter look at the President’s campaign manager, which sees her relaxing day off interrupted again and again as President Trump can’t stop tweeting to America. (Photo via Rosalind O’Connor/NBC/Getty)

7. When Larry David Gave Us a Peek Inside the Bernie Sanders Campaign: With election season over, we likely won’t be seeing much of Larry David in the role he was born to play (Senator Sanders), so we’ll continue to relish this look inside the Bernie campaign and all of its hilarious, “Bern Your Enthusiasm” style moments (like when fangirl Leslie Jones really felt the sting of the Bern as he refused to shake a hand she’d just coughed into). (Photo via Dana Edelson/NBC/Getty)

6. When Cecily Strong Said What We Were All Thinking in the “People’s Court”: On the heels of President Trump’s first few weeks in office, during which time it seemed like a new executive order was being issued every day (including one very controversial travel ban), Alec Baldwin returned to host SNL for the record-breaking 17th time. He not only reprised his role as our new President on the show; he took on the 9th Circuit Court judges who denied President Trump’s request to have his travel ban reinstated in a spoof titled “The People’s Court.” While the entire sketch is hilarious, it was cast member Cecily Strong in her role as Judge Milian who really hit the nail on the head, saying exactly what we’ve all been thinking: “You’re doing too much. I want one day without a CNN alert that scares the hell out of me.” CLASSIC. (Photo via Will Heath/Getty)

5. When Dave Chapelle, Chris Rock and Friends Were All of Us on Election Night: Election night isn’t one we’ll soon be forgetting. While some of America was undoubtedly glad to hear the results that President Trump would be America’s 45th leader, others were absolutely heartbroken. But no matter which side of camp you were on, you were likely (at least somewhat) surprised. Unless you were Chris Rock and Dave Chapelle, that is. In a gut-busting skit, two of our favorite comedians joined forces to offer comic relief to those needing a “Xanax or six” and lamenting the results after prematurely celebrating a Hillary “win.” (Photo via Will Heath/NBC/Getty)

4. When Kristen Stewart Called Out President Trump During Her Opening Monologue: Of all the epic celebrity guest hosts SNL has had in the past few months, the one that stuck with us the most was Kristen Stewart (and not just for her incredible use of Spanx). Girl not only dropped the F bomb on live TV — oof! — she reminded us all of that time that President Trump Tweeted about her 11 times in a row, before uttering these iconic words: “The President is not a huge fan of of me, but that is SO okay, and Donald, if you didn’t like me then, you’re really not gonna like me now, cause I’m hosting SNL and I’m like, so gay, dude.” (Photo via Wll Heath/NBC/Getty)

3. When Kate McKinnon Sang “Hallelujah” As Hillary Clinton: Though SNL has a well-deserved reputation of making light of issues that are more often than not of a serious nature, Kate McKinnon’s heart-wrenching rendition of Leonard Cohen’s beloved classic “Hallelujah” just days after the musician’s passing and Donald Trump won the presidential election was enough to have us sobbing. Bravo, Kate. Bravo. (Photo via Will Heath/NBC/Getty)

2. When Alec Baldwin Pulled Off the “Trump Loom” With Wild Abandon: Of all the insane moments we were privy to during the 2016 Presidential debates, none were quite so memorable as the body language our now-President displayed during his second face-off with Hillary Clinton. With even Hillary herself chiming in on the “Trump loom,” SNL didn’t dare miss the opportunity to liken him to a shark in a skit that had us absolutely rolling with laughter. Bonus points for the nod to America’s short-lived obsession with Ken Bone. (Photo via Will Heath/NBC/Getty)

1. When Melissa McCarthy Made Her Debut As Sean Spicer: Though Melissa has since reprised her role as America’s Press Secretary Sean Spicer, pretty much nothing could have prepared us for our first glimpse of her as the angry, gum-chewing “Spicy” in her debut skit, which she absolutely crushed, stealing the spotlight from Alec Baldwin and his much anticipated return as President Trump. (Photo via Will Heath/NBC/Getty)

What was your favorite political SNL moment from the last year? Tell us over @BritandCo.

Nicole Briese
Nicole is the weekend editor for Brit + Co who loves bringing you all the latest buzz. When she's not busy typing away into the wee hours, you can usually find her canoodling with her fur babies, rooting around in a bookstore, or rocking out at a concert of some sort (Guns N' Roses forever!). Check out all her latest musings and past work at nicolebjean.com.
Politics
TV
Politics
More From TV