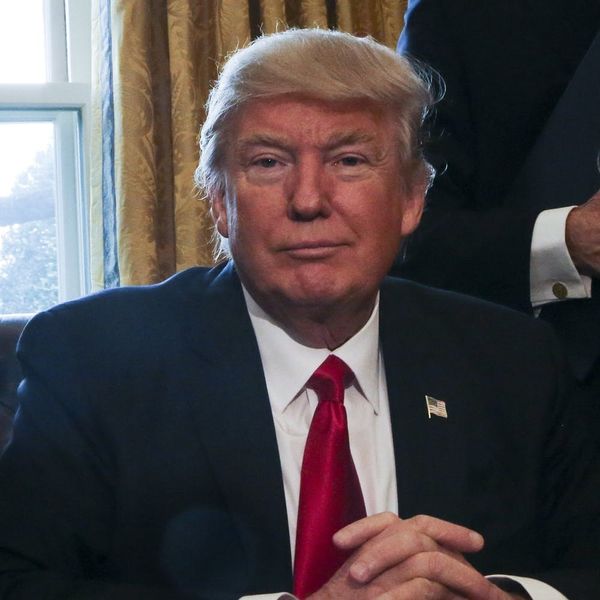 With each day that passes, it seems like there’s a new political story coming from the White House. Just this week alone we saw President Trump’s first official press conference, which sparked quite the debate, a new inauguration poster with an all too common typo, and a recap rally in Florida. Perhaps most shocking, however, was seeing our president call news media the “enemy of the American people” via social media. Yikes!

In a tweet sent out following the conference, the president attacked five of the nation’s biggest news outlets directly, writing: “The FAKE NEWS media (failing @nytimes, @NBCNews, @ABC, @CBS, @CNN) is not my enemy, it is the enemy of the American People!”

The FAKE NEWS media (failing @nytimes, @NBCNews, @ABC, @CBS, @CNN) is not my enemy, it is the enemy of the American People!

It didn’t take long for journalists, as well as those who merely support them, to come together in an effort to show President Trump that news outlets are, in fact #NotTheEnemy. The hashtag has been trending ever since the original comment was made and include many powerful, moving stories of journalists who risked it all to cover the news they believed in. So far, thousands of #NotTheEnemy tweets have been sent out and the hashtag is showing no signs of slowing down. Take a peek at a few of the most powerful ones we found below.

Bernard Fall, American journalist killed in Vietnam reporting the war back to the people. @realDonaldTrump had 5 deferments. #NotTheEnemy pic.twitter.com/cbPPr4OERg

This is Woodward and Bernstein. Nixon called them the enemy. They proved that no president is above the law. #NotTheEnemy pic.twitter.com/mU5Cx3JCuH

Meanwhile, others have been using the hashtag to address President Trump directly, like YA writer and blogger Danielle Binks who shared a photo of a powerful quote from Thomas Jefferson that’s found on the streets of New York: “Where the press is free, and every man able to read, all is safe.”

@realDonaldTrump Dude, this is literally imbedded in the sidewalks of New York – where you live! #Resist #TrumpRally #NotTheEnemy pic.twitter.com/UKIEfLoznP

Without a free press, @realDonaldTrump, there is no democracy. #NotTheEnemy

President Trump’s response came in the form of another tweet, this one declaring: “Don’t believe the main stream (fake news) media. The White House is running VERY WELL. I inherited a MESS and am in the process of fixing it.”

What do you think of the #NotTheEnemy movement? Tweet us @BritandCo.