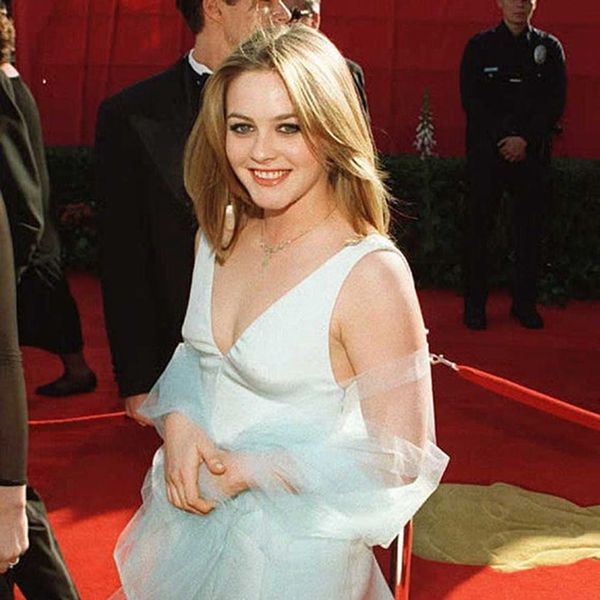 Red carpet fashion in the ’90s was a time of minimalism, spaghetti straps and ample cleavage. Since the era was pretty toned down compared to today’s bonanza, many of the dresses could easily go straight from the big screen to the gym of your high school prom. And with ’90s fashion being so hot right now (like, have you seen Forever 21’s spring collection??), we wouldn’t be surprised if many of the same trends we loved back then grace the Oscars red carpet again this year. In honor of this year’s awards, we’re taking a stroll down memory lane to relive our favorite Oscar fashion moments of the ’90s that we’re still loving today.

Vera Wang was hot in the ’90s, so what better person to rock her bridal-inspired fashion then it-girl du jour Alicia, whose movie Clueless changed our lives forever that year? Alicia paired the sleeveless white gown with a pale blue tulle wrap, making it a no-brainer for any of today’s brides (you’ve got your something blue!). (Photo via Vince Bucci/Getty)

The year after the movie Titanic stole our hearts and made her a household name, Kate rocked a curve-hugging emerald green stunner that proved long sleeves can be totally sexy on the red carpet. (Photo via Jeff Kravitz/Getty)

3. Courtney Love: The queen of grunge swapped out her dingy duds for an old Hollywood glamour look in this silk white Versace gown. The classic lines and plunging neckline are timeless, making it a great option for any of today’s young stars. (Photo via Andrew Shawaf/Getty)

This dress goes down in the history books. Gwyneth not only wore the bubblegum pink taffeta Ralph Lauren gown with graceful perfection, but she also took home an Academy Award that year for best actress in Shakespeare in Love. (Photo via Getty)

5. Jennifer Lopez: Though it’s not the iconic green Versace dress she wore to the Grammys the same year, Jennifer was totally princess-like at the 1999 Oscars in a black Badgley Mishka ballgown. Topping the look with a ballerina bun and some bling keeps it foolproof and enduring almost 17 years later. (Photo via Jeffrey Mayer/Getty)

6. Cate Blanchett: This dress was fierce! Only John Galliano could whip up an eyebrow-raising confection like Cate’s 1999 sheer back gown that made it look like she had a serious back tat. Rooney Mara would crush it in this dress today. (Photo via Steve Granitz/Getty)

On the arm of then-boyfriend (and soon-to-be husband) Richard Gere, Cindy left mouths agape with a deep-plunging red Versace gown. With big hair, a black mini clutch and black pumps to match, this look could easily be a winner for a blonde bombshell like our girl JLaw. (Photo via Ron Galella/Getty)

8. Christina Ricci: Versace was one of the biggest designers in the 1990s, so there’s no question why they had Christina, a hot young actress, wear this $25,000 gray and crystal gown. Fun fact: the dress was later donated to a charity, and a teen in Michigan got to wear it to her prom! (Photo via SGranitz/Getty)

9. Elizabeth Hurley: Wearing one of her favorite designers, Hurley made heads turn in this winter white, crystal-adorned gown by Versace. The short hair, matching shoes and crystal bag make her a ’90s poster girl for full-on glam in the understated tone of the era. (Photo via Jim Smeal/Getty)

At the height of her supermodel success, Tyra donned a nude body-hugging Halston dress in 1998 that we’re begging to be pulled out of the archives for another appearance (Brie Larson, we’re thinking of you). The dress could easily pass as a reincarnation of Kate Hudson’s two-piece Michael Kors dress she wore to this year’s Golden Globes. (Photo via Jim Smeal/Getty)
Dwyer Frame
Dwyer is a freelance lifestyle editor and writer based in NYC. When she's not obsessing over the latest trends you can find her whipping up a delicious meal, drinking margaritas or anywhere near water. Visit her site: Dwyerstyle.com
Oscars
Trends and Inspo
Oscars Red Carpet
More From Trends and Inspo