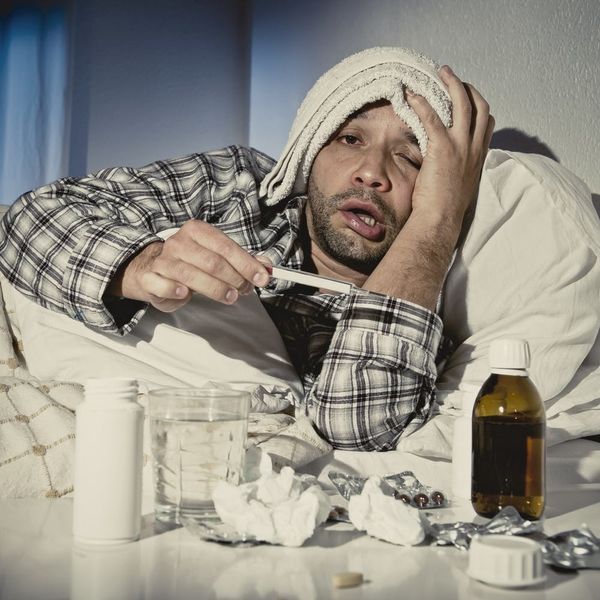 Anyone who knows a guy well, whether it’s your dad, brother, or significant other, knows that sometimes they can be, well, giant babies when they’re sick. Commonly called the “man flu,” the phenomenon of men turning into mush and taking forever to recover when they have a cold or flu has been used as a punchline against guys who appear to be playing up their minor illnesses for sympathy for a long time. But there may just be something scientific behind the man flu, according to a new study.

The study is titled “The science behind ‘man flu'” and was just published in the Christmas edition of the journal BMJ (formerly the British Medical Journal), an annual edition dedicated to sillier scientific pursuits. This year’s edition included a small study on the famous man flu by Dr. Kyle Sue, who is an assistant professor of family medicine at Memorial University of Newfoundland in Canada. In the study, Sue concludes that men might have a gap in immunity that makes it harder for them to get over a cold or flu.

As news of the study went viral on Tuesday, some men got pretty excited about the findings:

FINALLY!!!! #ManFlu is now an actual thing. All fellow men should rejoice at this, you can now call in sick to with this horrible illness 🎊🎉🎊🎉 pic.twitter.com/zeeEgoScXM

No need to thank me gents. #ManFlu I told you it is serious. Ladies you need to cut some slack. And make us a lemonee drink. pic.twitter.com/ekNmK9sM2l

#ManFlu is real! Confirmed by the British Medical Journal and a real doctor ☺️ I can neither confirm or deny if it was a male Dr whom confirmed this 😝 pic.twitter.com/4LjuL1XIZ5

But before anyone breaks out the champagne and NyQuil, there are some pretty major caveats to Sue’s study. The study was really small, and some of the evidence used wasn’t entirely scientific. This is largely because the Christmas edition of the BMJ is supposed to be read as a tad tongue-in-cheek (one of its articles is titled “Does Peppa Pig encourage inappropriate use of primary care resources?“), and the studies published aren’t as serious or rigorous as in your standard, peer-reviewed scientific paper.

The man flu study, as it happens, has not been peer-reviewed. It even appears Sue may have had a little personal score to settle, telling CNN that he looked into man flu because he was “tired of being accused of overreacting” when he got sick.

While some men have felt vindicated by Sue’s report, a number of women had different reactions to share:

umm so "man flu" is the term for when men have a sniffle and expect everyone to look after them, not actual flu.

so if you're not literally dying of actual flu, the "man flu is real" story is irrelevant to you.

A Canadian academic investigation saying #ManFlu exists has gone down well in the @BBCBreakfast studio 😂😬👍🏻 pic.twitter.com/8IN90Qv9Lm

Fire every male journalist if for the sole reason that we will never read about "man flu" again.

Nevertheless, Sue came up with some interesting data in his study, small and non-peer reviewed though it may be. Sue’s research included past studies that found immunological differences between male and female mice, as well as studies which found that cells from pre-menopausal women fought off the rhinovirus (common cold) better than cells from men in the same age range. He also notes that between 2004 and 2010, men in Hong Kong were at higher risk for hospital admission for the flu than women, and that studies on the flu vaccine have found women have a stronger response than men do to the inoculation.

Sue suggests that there could be an “immunity gap” between men and women, but even he admits the evidence isn’t great, writing in the study: “However, conclusions may be limited by author bias, the inclusion of some low-level evidence, and not reporting a critical appraisal of the studies cited. Additionally, the differences observed in these studies may not be representative of all respiratory viruses, and differences may be hidden within studies that did not stratify the various viruses or other differences between the sexes.”

Even still, Sue insists that “Men may not be exaggerating symptoms but have weaker immune responses to viral respiratory viruses,” which would mean their dramatic gripes about sniffles and a tickle in their throat might be justified. If a man finds himself coming down with the “man flu,” Sue recommends the same tried and true medical advice that would help anyone who’s under the weather: “Lying on the couch, not getting out of bed, or receiving assistance with activities of daily living could also be evolutionary behaviors that protect against predators. Perhaps now is the time for male-friendly spaces, equipped with enormous televisions and reclining chairs, to be set up where men can recover from the debilitating effects of man flu in safety and comfort.”

So, guys, if you’re not feeling great, just park it on the couch for a couple of days. You know, like everyone else.

What do you think about “man flu?” Tell us on Twitter @BritandCo.