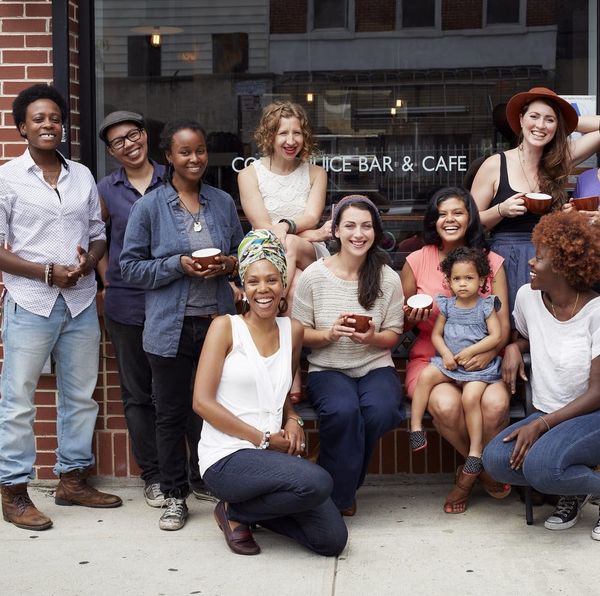 There’s no question that being a mom is really challenging. Between raising kids, maybe going to work or school, and taking care of yourself, there might not always be enough time for moms to keep their social lives intact. Though time with friends may get de-prioritized as moms try to juggle so many responsibilities, new research shows that moms are better parents and happier overall when they have close friends in their lives — especially when they are parents of teenagers.

A new study published in the journal Family Process finds that mothers received significant emotional support and practical help from their close friends. PsychCentral reports that this contributes to making them better parents. According to the study, moms felt closer to their teenage kids and had warmer feelings toward them when they had a close-knit friend group. Friends were also shown to be really helpful for mothers of younger children.

Other studies have found that first-time moms, in particular, tend to be incredibly overwhelmed and stressed out in their babies’ first several months, making it even more important to have the help of friends.

The study found that friends were able to step in to help out with day-to-day demands like babysitting, and also provide emotional support when their mom friends were having a tough time. A social support network also helped moms feel that they had more control over their lives, which generally helps to reduce stress (something moms have plenty of).

In our digital age, those relationships are sometimes fostered online. Molly, a 31-year-old mom of two girls under five, says that social support has been a game-changer for her as a parent. She tells Brit + Co that she was the first of her friends to have kids, so she relied heavily on the support of a parenting Facebook group.

Molly says she uses the group to connect “over [jokes about] what time of day is acceptable to open the wine, or empathizing over the pain of a tough decision or emotional loss. Within minutes you know you’ve been heard.”

Molly adds that hearing the perspective of other parents is just as valuable to her as the emotional support she gets from her in-person friends. In her Facebook group, she can hear the experiences of all kinds of parents: married, divorced, parents of older kids, parents of kids with disabilities, and so on.

“Sometimes all a parent needs is a safe place to lose their own minds while teaching their little ones how not to,” Molly tells us.

Interestingly, the new study found that social ties did not help men as much as it did women. In fact, fathers in the study who reported feeling out of control were not really helped at all by their friends. This finding makes perfect sense in light of separate recent research that found men do not benefit as profoundly from friendships as women do, and overall feel less supported by friends than women.

The study’s author, Dr. Terese Glatz of the Örebro University in Sweden, says this means dads need different interventions to help them out when they’re having a hard time.

“Support activities for fathers may perhaps need to focus specifically on how they can regain a sense of control, while the efforts in helping mothers may entail support in expanding their social network,” Glatz tells PsychCentral.

Though dads may need something a bit different, it’s clear that moms really need their friends around to provide support. Moms everywhere should definitely take this as permission to join a book club, have ladies’ night more often, or just call up friends for girl talk.

Are you a mom whose friends help you to be a better parent? Tell us about it on Twitter @BritandCo.

Elizabeth King
Elizabeth King is a politics, history, and culture writer based in the Twin Cities. She is generally pretty cranky but still enjoys traveling, music from the early 2000's, and plotting the resistance. Feel free to say hi on Twitter at @ekingc or check out some of her work at www.elizabethcking.com.
New Moms
Current Events
New Moms Parenting