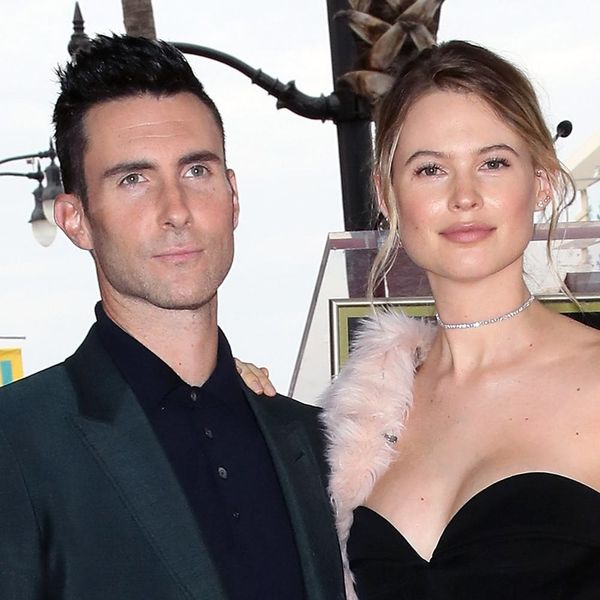 It was just last December that Blake Lively and Ryan Reynold’s kids, James and Ines, made their public debut as dad Ryan Reynolds got his star on the Hollywood Walk of Fame.

Now, another famous family has introduced their daughter to the world for the very same reason. Adam Levine was honored with his own star on the walk today, and not only was wife Behati Prinsloo on hand to help him celebrate, but their recently born baby girl, Dusty Rose, was also in attendance.

Marking the babe’s first public appearance since her birth back in September, Dusty Rose (who also happens to have one of 2016’s most influential celeb baby names), was every bit as adorable as expected as daddy Adam placed her little feet inside his star — just look at that face!

“I have a daughter, I have the most beautiful wife in the entire world, I am one of the luckiest people who’s ever lived and it has nothing to do with me,” he reportedly said in his acceptance speech. “It has to do with the people who love me the most, and so, I thank all of those people. I can’t do it individually, but I thank you all.”

Also on hand? Adam’s The Voice co-stars, Gwen Stefani (who nabbed a seat next to Behati and Dusty for the ceremony) and Blake Shelton, who posed with the happy star recipient in front of his new tribute.

Who do you think deserves the next star on the Hollywood Walk of Fame? Give us your suggestions over @BritandCo.

Nicole Briese
Nicole is the weekend editor for Brit + Co who loves bringing you all the latest buzz. When she's not busy typing away into the wee hours, you can usually find her canoodling with her fur babies, rooting around in a bookstore, or rocking out at a concert of some sort (Guns N' Roses forever!). Check out all her latest musings and past work at nicolebjean.com.
Celebrity Baby
Current Events
Celebrity Baby Family
More From Current Events