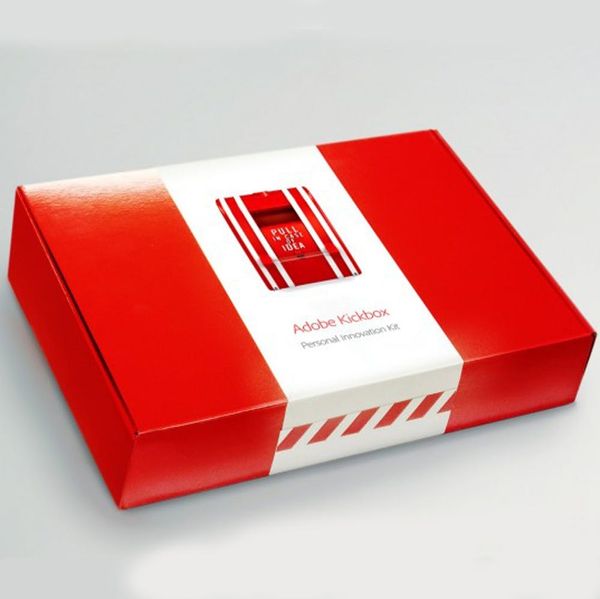 It’s no secret that we’re all about fostering creativity and the #iamcreative spirit, and we’re not alone. Adobe has launched a million dollar campaign in the hopes of discovering the next budding entrepreneur and million dollar idea among their employees. Their campaign takes the form of 1,000 “Adobe Kickboxes,” which come equipped with all the essentials for getting a business started, like a prepaid credit card with $1,000 and even, yep, a bar of chocolate.

Adobe sent out 1,000 Kickboxes to their employees around the world. Each Kickbox includes things like a timer, a small notebook for “Bad Ideas,” a bigger notebook for all the other ideas, a caramel and sea salt chocolate bar, a $10 gift card to Starbucks, a prepaid Citi card for $1,000 and a set of instructions on how to beat the box and “win.” After receiving their Kickbox, Adobe employees are even invited to attend a two-day course to build and strengthen their entrepreneurial skills.

To receive a Kickbox, any (seriously, any) Adobe employee just has to ask for one. Even better? There aren’t any deadlines for results or repercussions for failing. Say whaaat? Adobe’s Chief Strategist and Vice President of Creativity, Mark Randall, said that many of their more successful Kickboxers succeeded on the second attempt. We don’t blame ’em! Getting through all six levels of the Kickbox and ultimately defeating “The Box” is pretty tough.

*Cue dramatic announcer voice* The first level is called Inception, and no, you’re not going to make dream ideas within dream ideas. For Inception, you’ve got to firmly establish all the motivation behind your project and answer the difficult question, “Why?” After laying down your foundation, the next level, Ideate, has you generating as many ideas as possible in a 45-minute period.

If you want to stand a chance of defeating the Box, you’re going to need to improve your ideas. The next level has employees choosing just one idea from their long list of ideas. Told ya it gets hard. After selecting an idea, it’s time to put it to the test and take on the next level: Investigate.

If your prototype ends up kicking ass, then you’re ready for level five, Iterate. You’ll be reviewing all the information from level four and improving your project before it makes it to the boss level: Infiltrate. At this stage, employees pitch their ideas to management and conquer The Box. The prize is actually another box, cleverly dubbed “the blue box,” but no one knows what’s inside… yet.

Adobe may not have found its hit idea yet, but out of the 1,000 Kickboxes that were sent, 23 great ideas have already been approved for more investments from senior management. Jealous of Adobe employees? You can get your own Kickbox for a cool $1,000. Blue box, here we come!

Do you have the million dollar idea? Share it with us in the comments below!

Stephanie Chon
As a spoken word fanatic, Stephanie enjoys journaling about her day using imperfect rhymes. In her free time, she likes to dance, watch random episodes of How I Met Your Mother and play her ukulele.
Tech
More From Tech