After Being Bullied So Badly She Got Death Threats, Aija Mayrock Wrote This Lifesaving Guide 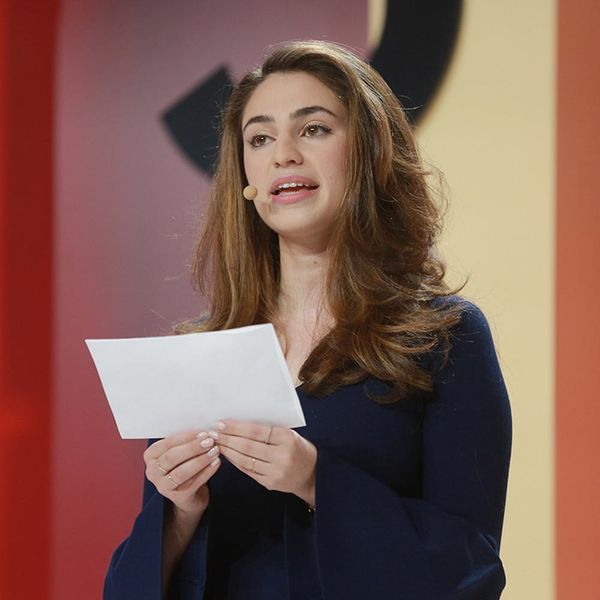 From age eight to 16, Aija Mayrock was heavily bullied in school. As is the case for many who fall victim to bullying, Mayrock felt hopeless – until she picked up a pen. During some of her darkest hours, Mayrock decided to fight on and write The Survival Guide to Bullying, an emotional combination of personal stories, survival tips, “roems” (rap poems), and quick quizzes.

Now a 22-year-old NYU student, Mayrock may have left her high school bullies behind, but she’s still as dedicated to her cause as ever. She regularly performs her “roems” onstage and spreads her message in schools. She even recently gave the opening remarks at a UN summit for female empowerment.

We chatted with Mayrock about her personal experience with bullying and how she’s working to change things for future generations.

B+C: Can you tell us a little bit more about your experience being bullied as a kid?

Mayrock: At eight years old, I had a lisp and a stutter and I was a really creative kid. I kind of marched to the beat of my own drum. Early on in my third-grade year, I started getting bullied for the way I spoke. I stopped sticking up for myself and kind of stopped speaking in general. I was repeatedly bullied verbally, physically, and online by both girls and boys for about five years after that. When I was 13, I moved with my family from New York – where this took place – to California because my dad had a job opportunity there.

Did the move help put an end to the bullying?

I had one year that was great and nothing happened. Then, in my freshman year of high school, a girl I’d never met from my old school in New York dressed up as me for Halloween. She posted it online and it went viral. Suddenly, I was flooded with death threats, hate comments, and I hit my rock bottom. I really didn’t know how to continue. That’s when I began writing my book. I realized that I wanted to find a way to show young people around the world that they could get through bullying. I wanted to show them they could survive and thrive.

The book’s topic is heavy and also very personal to you. What was the experience like writing it?

For me, writing the book started as a way to really save myself – to save my life. It was something made me feel like I had a purpose on this planet. In the beginning, I wrote it as a kind of diary. Then it morphed into half-memoir, half-self-help book. Half of the book is filled with short stories from my life and the time I was bullied that actually were written in real time during that period. The other half is actual advice that anyone – a student, a parent, a family member, or an educator – can use personally to help a person being bullied. It’s designed it so that if you are in the bathroom at school and you are struggling and you need help, you can open it to any page and find something.

Yesterday I got to visit my book which is housed in the Library of Congress. At 16 years old when I began writing my book, I never ever imagined I could go to such a historic building and see a copy of my little blue book. Never ever give up on your dreams. Don’t let anyone tell you that you aren’t capable. You are. One thousand times over, you are.

For a lot of people who’ve been bullied, it’s a hard thing to talk about and relive, but you’re doing that in a very public way. How have you dealt with bringing those struggles out into the world so openly and regularly?

You know, whether it’s bullying or mental health, there’s so much stigma. In the beginning, it was hard for me to realize that a lot of people would be reading my story and would be able to judge it in whatever way they want to. But I thought about the millions of people being bullied or people have been bullied. I decided I was going to be brave and try to take part of that stigma away by speaking out and saying, “Look at me. There is nothing wrong with me. I was bullied because someone decided to bully me but, that doesn’t mean that I can’t triumph over it.”

Now that you’re 22 years old, how have you seen bullying translate into the adult world?

I will say that right now in my life, I see bullying translated into sexism, misogyny, and gender inequality. I was actually just asked to open the United Nations Summit for Girl Up, the gender quality division of the UN. I’m talking a lot there about my experience with bullying in the world today and the misogyny and sexism we’ve faced at some point in our lives.

Since you’ve started your activism against bullying, have you seen any major improvements or steps forward?

There’s still a lot of work to do, but I’m also seeing a lot more content out there – whether it’s on broadcast news or a TV show – where they’re talking about bullying. Just a few years ago, when I was in high school, that didn’t happen. People didn’t want to touch the subject.

“I was bullied because someone decided to bully me but, that doesn’t mean that I can’t triumph over it.”

Realistically, do you think we’ll ever get to a point where there is no bullying?

No. I don’t believe that it’s possible to have no bullying. Part of bullying is ingrained in human nature. It has always been there and it always will be there. What has exacerbated it and made it so much worse is social media and technology. Rules and educational institutions haven’t done enough to enforce kindness in their curriculum.

Speaking of school and the education system, a lot of your work involves going to schools to spread your message. Through those visits, have there been any schools where you’ve been impressed with how they’re combatting bullying?

Yes! There’s a school in Long Island, New York called Jericho Middle School that I have visited a few times and worked with and they’re incredible. Their principal has a huge, week-long event every year that’s focused on standing up to bullying, creating a kind space, and encouraging an open dialog. He really amazing. Every year I go back and see improvements. They are great examples of what every school should be.

You’ve already managed to accomplish so much, but clearly, you’re not planning to slow down anytime soon. What’s up next for you?

I want to write for film and television. I want to tell stories about human rights and civil rights issues. I also want to be an activist – not just for bullying but for things like female empowerment. That’s something that I really want to continue working on. I want to keep sharing my work all around the world on different stages. I also want to act. I want to do it all!

Cortney Clift
Cortney is the senior writer and special projects editor at Brit + Co. She typically covers topics related to women's issues, politics, and lifestyle. When she's not buried behind her computer you'll find her exploring New York City or planning her next big adventure.
Activism
Empowerment
Activism Ladies First
More From Empowerment