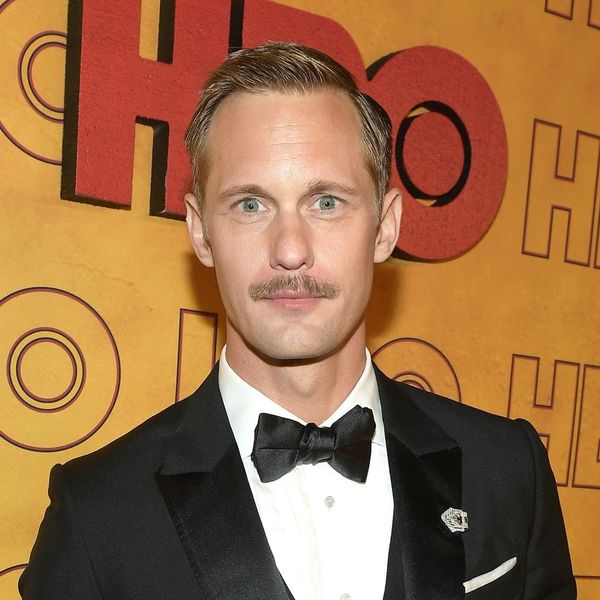 Alexander Skarsgård is an undeniable heartthrob. With those dreamy blue eyes, chiseled cheekbones, and sandy blonde locks, the Big Little Lies actor has the power to make women weak. He even had Oscar-winner Nicole Kidman flustered when the two shared a kiss at the Emmys! But when the Swedish actor, 41, stepped out for the Louis Vuitton Exchange opening in NYC last night, fans barely recognized him.

Gone was The Aftermath star’s perfectly groomed coif, replaced instead by a — gasp! — mostly shaved head. With a barren dome and reddish brown locks at the sides, it was a transformative cut the likes of which the internet had never seen.

While the look was for a role — the Emmy winner will be playing Anton Zaleski in The Hummingbird Project — reactions were swift, with Twitter users the world over weighing in on the change.

WTFFF alexander skarsgard better win a damn oscar for whatever this movie is @TheAcademy 🤧 pic.twitter.com/CUZUUx9NOa

You had ONE JOB, Alexander Skarsgard!https://t.co/oEaHtOkoXS

WHAT has Alexander skarsgard done to his hair

There aren’t enough trained therapists or smelling salts in the world to treat those affected by Alexander Skarsgard’s latest hair cut.

Still, plenty concurred that it didn’t revoke his babe status, with others still proud to have their hairstyle represented by such company.

Alexander Skarsgard is practically bald but I mean….he can still get it

There is nothing that Alexander Skarsgard can do to himself physically that would make me less attracted to him. FACT.

I love you, Alexander Skarsgard, always. I think your new haircut is sexy. Ignore the haters. Love, wifey

What do you think of Alexander’s new look? Share with us over @BritandCo.

Nicole Briese
Nicole is the weekend editor for Brit + Co who loves bringing you all the latest buzz. When she's not busy typing away into the wee hours, you can usually find her canoodling with her fur babies, rooting around in a bookstore, or rocking out at a concert of some sort (Guns N' Roses forever!). Check out all her latest musings and past work at nicolebjean.com.
Celebrity Hair
Hair
Celebrity Hair Hair Haircuts