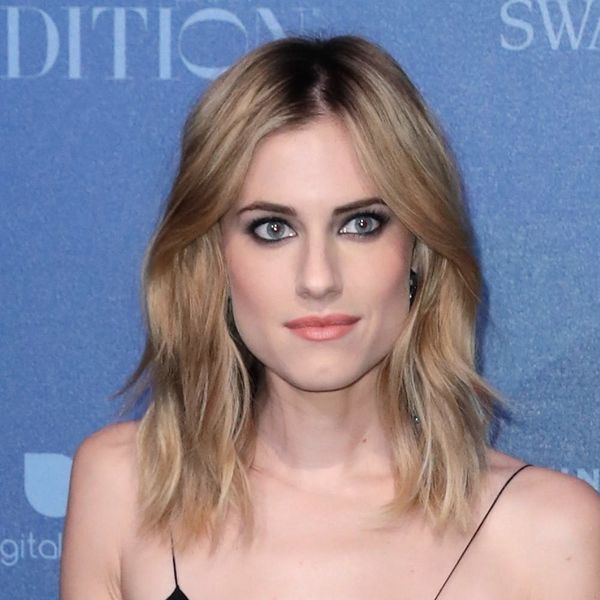 Maybe blondes DON’T always have more fun! Despite the fact that The Crown star Claire Foy recently admitted she was treated better as a blonde, she made the choice to go back to brunette due to the non-stop maintenance of it all — a sentiment Kim Kardashian West also seemed to be on board with following a grueling 13+ hours in the styling chair to maintain her platinum hue. Now, Allison Williams is following suit, ditching her sunny blonde tresses in favor of her own natural brunette shade.

The Girls star shared the selfie of her newly-dyed brown locks over on Instagram, adding a heart emoji-laden caption which read, “Back to my roots. Blonde was fun, but I’ve got to say that I’m happy to be back.”

It’s a switch she’s been contemplating for a while, telling Brit + Co. back in 2016, “What girl isn’t constantly thinking about their next drastic hair change?! I’m thinking of dying it dark, dark brown and getting bangs.”

Instead, she appeared to have followed what she says was the best advice she ever received to “wait two weeks before getting any haircut. Sometimes it’s a passing phase!! Some of them are so drastic that you have to really like it — otherwise, you can be completely stuck with it while it grows out.”

As a result, she wound up going in the opposite direction, debuting an icy blonde look on the March 2017 cover of Allure.

Now, despite the fact that she too says she “got more attention” as a blonde (“It’s so stupid,” she quipped during a Vanity Fair podcast) she’s made the big swap, and from the looks of her Instagram stories, it appears to be well worth the wait.

We for one, think she looks great (though honestly, the Get Out star could pull off just about any color). Looking gorgeous, Allison!

What do you think about Allison’s new brunette ‘do? Let us know @BritandCo.

Arielle Tschinkel
Arielle Tschinkel is a pop culture junkie who went to NYU because the Olsen twins went to NYU (really). She is a freelance writer whose work has also been featured on HelloGiggles, Refinery29, SheKnows, Bustle, Hollywood.com, and many others; and she's living her dream one Britney Spears GIF at a time. Follow her on Twitter @mrstschinkel or visit her website at arielletschinkel.com.
Celebrities
Hair
Celebrities Celebrity Hair Hair Color hair dye