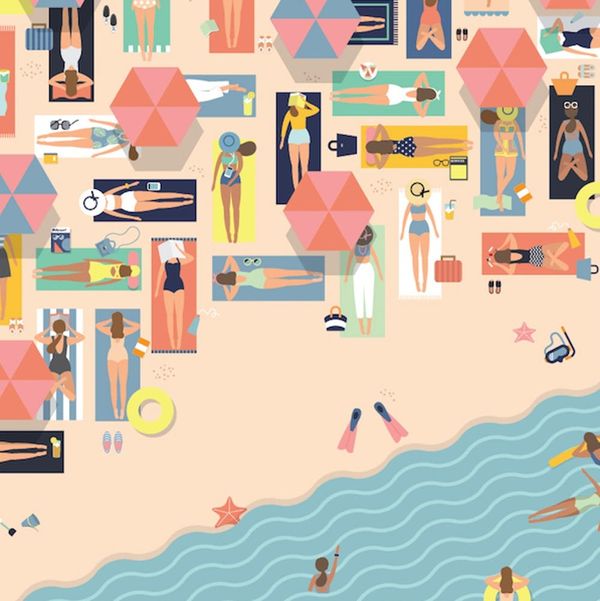 Behance is like LinkedIn for creative work. From food photography to fine arts, it’s easy to fall down a rabbit hole browsing all of the amazing projects artists and creatives from all over the world are putting together. The site is quickly becoming our favorite place for a quick jolt of creative inspiration. In just a few clicks, we promise your mind will be swarming with ideas. We’re counting down the days until we can hear Behance’s co-founder Scott Belsky speak at Re:Make 2015 (psst, get your tickets here)!

1. Bettina Güber: Bettina is a media designer from Krefeld, Germany. Her portraits of flowers are simply breathtaking, but the designer also has lots of humorous photos featuring a plastic dinosaur figurine that are definitely worth checking out. The above photo comes from a series of floral portraits titled “Miss Lisianthus and Friends“.

2. Putri Febriana: Putri is a graphic designer from Jakarta, Indonesia. Her work is whimsical and super playful, but also extremely cool. This particular picture, titled “Summertime,” ended up being printed on a silk scarf, which you can find at her online shop, Swanderful Things.

3. Vanessa Rees: Vanessa is a freelance photographer based in New York City. She’s photographed everything from food (like this shot from the Protein Nija Cookbook) to still life.

4. Sacha Treager: Sacha is an illustrator from Chicago who uses watercolors to render lifelike portraits of people and botanicals. This one is from a series titled “Eolini,” featuring Korean school children.

5. John Soleas: John is an illustrator and animator based in Toronto, Canada. This one is from a series of animated GIFs titled “Junk” exploring the use of discarded tech. We think there’s something so fun and industrious about his animations. Can you stop watching this girl jacking up this machine? Didn’t think so.

6. Hine Mizushima: Hine is a slow crafter, needle-felter, illustrator and puppet stop-motion video artist. She creates these adorable miniature dioramas and some of her fave subjects are cephalopods. This one, titled “Cephalopod Classroom,” was made in conjunction with one of her good friends, Yuko Higuchi.

7. Tim Tadder: LA-based photographer Tim Tadder is definitely a big deal on Behance. His portfolio has more than two million project views! We love this shot from his “Couture Children” series.

8. Joanne Nam: Joanne Nam is a painter and illustrator from Los Angeles. Her paintings often feature one lone girl at nighttime. All are hauntingly beautiful. This one is an oil painting she did on wood titled “Bruise“.

9. Lisk Feng: Lisk is a freelance illustrator and print designer living in New York City. Her work has appeared in various publications and advertisements. We love this animated GIF she created for the New York Times.

10. Jiani Lu: Jiani is a graphic designer and photographer from Toronto. Our favorite is this shot from her “Two Years in 50 Instagram Photos” series. Hard to believe it was captured with an iPhone!

11. Elisa Vendramin: An established graphic designer and illustrator from Milan, Elisa creates pieces that can only be described as stunningly ethereal. This GIF, created for the Watson Design Group in anticipation of Disney’s 2015 Cinderella movie, was meant to reflect the crystals in the glass slipper.

Kimberly Wang
Kimberly Wang writes about all things pop culture, tech, style, and beauty. She's a Bay Area transplant and has an MFA in Creative Writing from Columbia University. On a sunny New York day, you can find her hanging out with her mini schnauzer Isabelle Jellybean on a blanket in Central Park.
Art
Tech
Art Re:Make