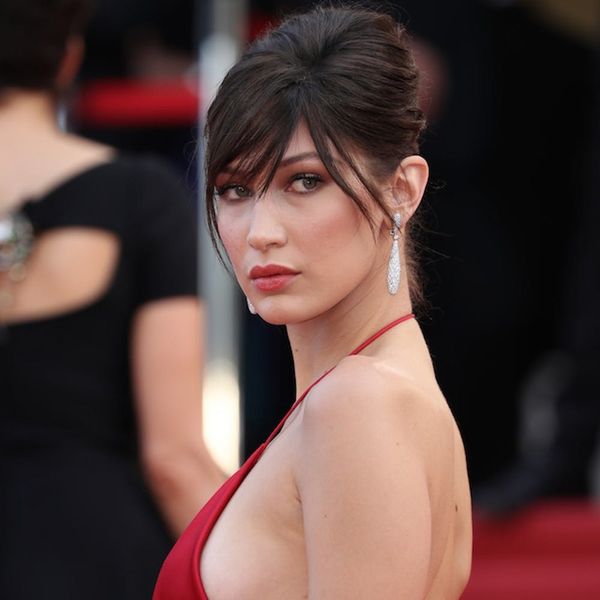 Never one to shy from a bold look, Bella Hadid continues her reign of Cannes style queen. Last year, Hadid wore a leg and hip-baring red gown, but this year she took it one step further by walking the 2017 amfAR Gala red carpet in a nearly naked number.

Designer Ralph & Russo posted a snap on Instagram of the 20-year-old model stepping out in the fashion house’s stunning custom one-shoulder sheer crystal gown that featured a thigh-high slit. The chandelier-like effect of the dress gave off the illusion the supermodel was wearing nothing underneath the hand-embroidered shimmering silver crystals and carefully arranged silver chains.

The rest of her look was kept ethereal, yet simple: silvery shadow accenting the corners of her eyes, a nude lip, a tight bun, and some strappy silver sandals. She also wore almost no jewelry, because honestly, when you have a dress made out of crystals and silver chains, you really don’t need any other accessories.

According to the designer’s Instagram, Hadid’s dress was “skillfully designed and embroidered by thirty petite-mains using thirteen different embellishment materials, including hand appliquéd silver chains.” Petites main, literally translated as “little hands,” are the seamstresses and tailors who bring these couture creations to life.

This definitely isn’t the first time the model decided to go bold with a red carpet look, and it certainly won’t be her last. Her Met Gala onesie by Alexander Wang was definitely one of the riskiest looks of that night as well.

Hadid certainly has the confidence (and fashion tape) to pull it off!

What do you think of Bella Hadid’s latest look? Tell us @BritandCo!

Shea Lignitz
Shea can be found in the nearest bookstore or brewery, exploring the great outdoors, or blasting Led Zeppelin. She grew up in the cold and rain of Northern California's redwoods but is currently wandering around Texas.
Celebrity Style
Celeb Style
Celebrity Style Red Carpet
More From Celeb Style