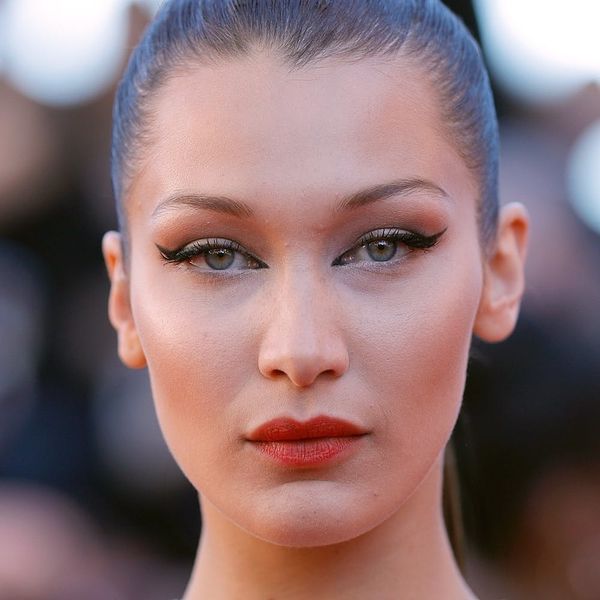 Of all the ladies slaying on the red carpet, however, one style star in particular seems to be rising above the rest: Bella Hadid. Not only did Gigi’s supermodel sis bring a rather unexpected date in father Mohamed Hadid to her first festival screening, but girl is having a major *moment* on the sartorial world stage. Check out her best looks of the fest below.

1. Fest Day One: Hadid came to win right out of the gate, showing up to the festival in a chic silk two-piece bralette and skirt set, a long duster shirt, a Croc Dior bag, and a pair of nude pumps. Slay, girl. Slay! (Photo via Rubino Salvatore/Getty)

2. Ismael’s Ghosts (Les Fantomes d’Ismael) Screening: For her first night on the red carpet, the 20-year-old stunned in an Alexander Vautheir silk blush-of-the-moment gown with a thigh-high slit and a blue Bulgari necklace that could have been the Heart of the Ocean. (Photo via Pascal le Segretain/Getty)

3. Okja Screening: Hadid hit the screening of Lily Collins’ new film in a showstopping red quilted Dior gown that featured an open back with two delicate crisscrossed straps. Bulgari was once again behind the gorgeous snake neck bling wrapped around her neck, with a classic cat-eye and a matching bold red lippie to round out the look. (Photo via Andreas Rentz/Getty)

4. Chopard Space Party: Post red-carpet, Hadid channeled her gal pal Kendall Jenner’s 21st birthday Labourjoisie dress in a fancier, custom Roberto Cavalli version as she partied with the model at jeweler Chopard’s space party after hours. “She’s finally here!” Hadid wrote on the snap she shared of the two on her page. (PS — Can we talk about those lace-up sandals!? FIRE!) (Photo via Pascal le Segretain/Getty)

5. Out and About in Lace: Gigi’s little sis kept it casual as she headed out for a day on a yacht in a pair of sneakers and a lace cover-up she rocked over a matching lace bikini with high-cut bottoms. Looking good, girl! (Photo via Pierre Suu/Getty)

Which of Bella’s looks do you like best? Tell us over @BritandCo.

Nicole Briese
Nicole is the weekend editor for Brit + Co who loves bringing you all the latest buzz. When she's not busy typing away into the wee hours, you can usually find her canoodling with her fur babies, rooting around in a bookstore, or rocking out at a concert of some sort (Guns N' Roses forever!). Check out all her latest musings and past work at nicolebjean.com.
Blake Lively
Celeb Style
Blake Lively Celebrity Style
More From Celeb Style