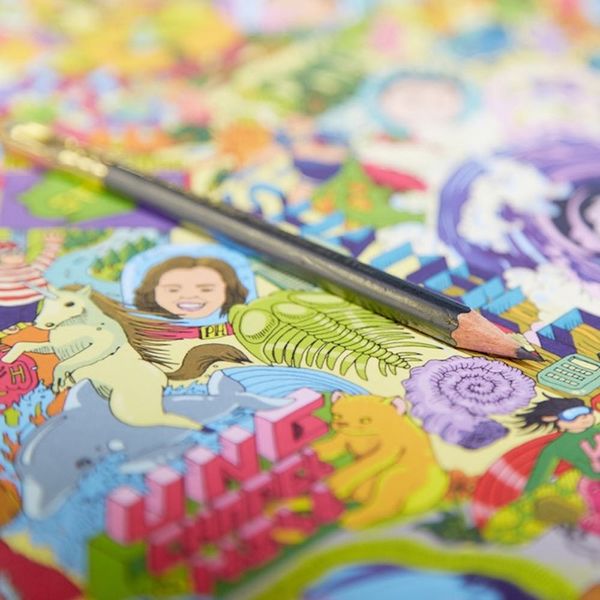 Last spring, UK artist Benjamin Redford created a crowd sourced drawing by asking Kickstarter participants to reserve a little cube of space on the canvas for $1 each. The participants could ask Redford to draw whatever they wanted. Requests came from all over the world during a 35-day period, and the drawing, titled “Internetopia,” was the final result. The end piece of art was 24 x 36 inches and was drawn entirely in pen and pencil, resulting in a very detailed, but very monochromatic piece of art.

Redford loved the process of creating this drawing so much that he came back to his original contributors a year later to see if they wanted to do a followup project. Instead, everyone agreed they wanted to see a color version of the original drawing.

Now the second, brilliant full-color version of “Internetopia” is ready for viewing.

Redford mostly worked from instinct when it came to coloring the drawing. He referred back to the original list of requests to make sure any color requests were respected but other than that he stuck to a classic 64 color palette inspired by vintage comics — one of his favorite art forms.

The largest piece of crowd-sourced art done by a single artist, “Internetopia” features a total of seven Waldos. Can you find them all?

Some other random facts about the piece include: The largest purchase by one contributor was 125 cubes, the number 42 was requested by two separate individuals and a very high percentage of requests involved animals.

If you’re curious, Redford’s website has the entire list of 220 requests from a “tipsy octopus” to “Vladimir Putin, shirtless, eating Fudgesicles.” If you want to pick up a copy for your gallery wall, there’s a limited edition of 500 signed full-color prints from Internetopia for $150.

What would you have requested? Talk to us in the comments below!

Kate Thorn
Kate Thorn is an illustrator, foodie, photographer, and blogger at Create & Kate. She loves creating art, traveling, and all things chocolate. A native to the Great Northwest, she is currently living in London and pretending to be a mature grad student.
Art
Home News
Art Artist Illustration Kickstarter
More From Home News