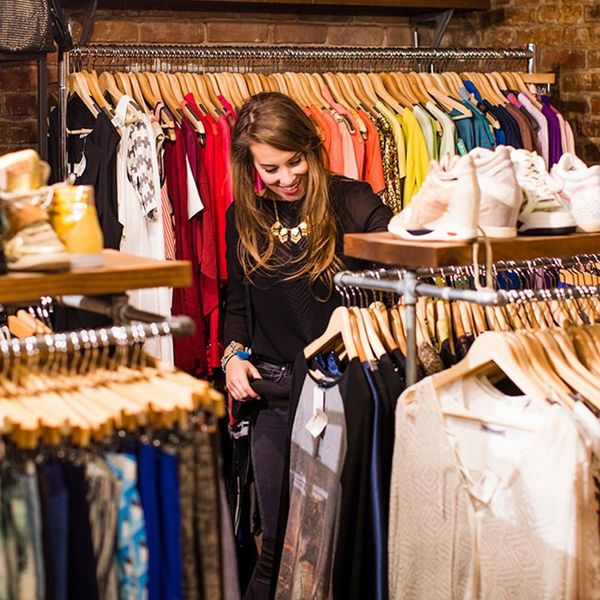 Giving presents to loved ones is one of our favorite parts of the holiday season. But despite our best efforts to honor our holiday budgets, we’re totally guilty of overspending when we see a gorgeous something-something that we know our bestie will love. To help us stay on track and avoid having to work off our holiday bills in the new year, we scored the DL on the best days to buy holiday presents from the coupon extraordinaires at Rather Be Shopping. Using nine years of couponing and sale data, Rather Be Shopping deciphered the exact dates to shop in order to get the best prices on everything during the holiday season — including stocking stuffers, children’s toys, and fitness equipment.

1. Clothes, Shoes, and Accessories: When it comes to clothing and accessories, the best deals of the season happen on Cyber Monday (November 27 in 2017). However, if you miss picking up your holiday goodies during November’s mega-sale, Rather Be Shopping suggests setting your sights on the second-best day to shop online for apparel — Friday December 15. Also known as Free Shipping Day, hundreds of major retailers use this date to offer guaranteed shipping by Christmas Eve, and many even pair this deal with an awesome coupon. While it may be a little bit risky to shop so close to the holiday, it could save you some major bucks.

2. Christmas Toys: In 2016, Rather Be Shopping reported that the best prices and coupons for toys (including goodies from Toys R Us, Target, and Walmart) happened on December 16. Kyle James from RBS predicts that many of this year’s toy deals will happen in-store on December 16 to accommodate semi-last-minute shoppers.

3. Fitness Gear: “The last couple years we got new coupons for Sports Authority, Dick’s Sporting Goods, Modell’s, and Big 5 Sports Goods on December 10,” James highlights. Good deals have historically appeared around mid-December: “Another good day is December 15, as Dick’s, Reebok Store, Under Armour, and Puma have already announced they will ship for free on that date.”

4. Televisions: If you’re looking to purchase a new television for the family this holiday, RBS suggests shopping during the second week of December. “Over the past eight years, in particular, we’ve seen some killer weekend deals two weeks out from Christmas from Best Buy, Costco, and Walmart,” notes James.

5. Stocking Stuffers: According to the couponing experts, the best time to pick up small gifts and knickknacks is on the second week of December. Rather Be Shopping data shows that specialty gift online retailers like Red Envelope, Things Remembered, and Shutterfly usually have week-long coupons starting on December 11.

6. Laptops: “For the past three years, on December 13 Dell and HP have hooked us up with some incredible online coupons,” James says. Along with these solo brands, James also suggests checking Costco around mid-December for great holiday-season deals on several hot-ticket laptop brands.

7. Tools: “The last few years have seen some killers deals and price drops from Home Depot, Lowe’s, Ace Hardware, and Harbor Freight Tools,” James says of the December 13 sale. But if you want to shop in-store, try holding off until December 15 through December 23 for deals upwards of 20 to 30 percent off.

8. Winter Apparel: Like other apparel, Free Shipping Day is definitely the best time to get your hands on this year’s hottest winter apparel. From adorable mittens to a chic winter jacket, make the most out of Free Shipping Day and order your winter goodies on December 15.

9. Gaming Systems: Whether you’re looking for the brand-new Xbox One X, a PS4, or something vintage, RBS suggests waiting until the third week of December to purchase your gaming equipment. “Every year over the past eight, we have seen some great deals from Gamestop, Amazon, Walmart, Target, and Newegg,” James writes. With new video games usually up to 35 percent off and used games around 60 percent off, December 12 to 15 is a great time to splurge on your game-obsessed friends and family.

10. Jewelry: “If you are window-shopping for a wedding band, now is a pretty darn good time to consider buying, as prices could conceivably rise significantly after the holidays,” according to James. While there are no specific dates in December that Rather Be Shopping found to get the best deal on wedding bands and jewelry, the holiday season, in general, is a great time to get a low price on some high-end items.

Do you have any money-saving tips for holiday shopping? Tweet us by mentioning @BritandCo — and make sure to follow Rather Be Shopping for more coupons and sales leading up to the holidays.

Ashley Macey
Ashley Macey is a lifestyle freelance writer who loves all things fitness, wellness, and creativity. When she's not exploring her home in the Pacific Northwest with her dog Max, you'll probably find her curled up with a good book and some hot tea. Follow her daily jaunts on Twitter.
Budget-Friendly
Adulting
Budget-Friendly Holiday Shopping Shopping
More From Adulting