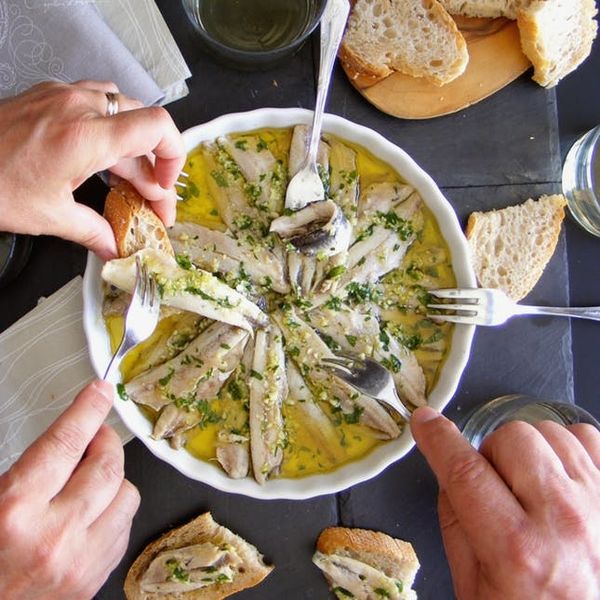 It’s not uncommon to walk into a Spanish restaurant and be faced with a bar full of pintxos (small snacks) or a menu full of tapas. You might be overwhelmed and not know exactly what to order, which is why we're here to help. There are so many more surprisingly delicious options than paella or patatas bravas (fried potatoes). Here are 10 that are worth discovering.
Bacalao a la Llauna: Like many other Spanish dishes, this one takes its name from the receptacle in which it's cooked. A llauna or llanda is a tin baking dish in which cod was traditionally cooked. This simple dish is made delicious by using the freshest fish and pairing it with beans. (via Cocina Tu Imaginación)
Boquerones en Vinagre: Anchovies are inescapable in Spain; sometimes they’re fried, sometimes they're fresh. Many times they're prepared in a simple vinegar sauce made with herbs and olive oil that you can enjoy with a crusty slice of bread or all on its own. (via Cogollos de Agua)
Chorizo in Cider: Few other recipes encapsulate the essence of traditional Spanish cuisine like this chorizo a la sidra from the northern region of Asturias. Chorizo is found all over Spain, but cooking it in cider is a tapa tradition from the north where warm, hearty fare is preferable in the wintertime to some of the lighter snacks you find as you go south. (via Hola Foodie)
Spanish Churros con Chocolate: Spanish dipping chocolate is silky and thick so it coats the lightly spiced churro perfectly to make every bite better than the last. It’s no wonder that there are places dedicated exclusively to serving this mouthwatering treat. (via Yummy Addiction)
Croquetas de Morcilla: Both blood sausage and croquetas are seen everywhere throughout Spain, so a croquet made with blood sausage is a natural combination. (via Cocina Tu Imaginacion)
Pescaíto Frito: Just like calamari is popular in the US, in southern Spain, deep-fried fish makes a regular appearance on the menu. Although it's generally referred to as fried fish, a variety of seafood gets battered and served in this misnomer of a dish. (via Hola Foodie)
Tortilla Española: Spanish tortillas are nothing like their Mexican counterpart. In Spain, a tortilla is closer to an egg frittata. The combination of fried potatoes and eggs is left to set until it takes on a perfectly rounded form. It's often eaten plain as a tapa, but can also be enjoyed on a baguette as a lunchtime sandwich. (via Goodie Godmother)
Tomato Jam: In Catalonia, tomato jam is a breakfast staple. Many restaurants serve a simple smear of this jam on a fresh baguette along with a strong cup of coffee. (via What Should I Make For…)
Mussels With Chorizo, Saffron, and Sherry: All up and down the coast you can order mussels to munch on. You can do that in France too, but the Spanish take it a step further: They add chorizo for that scrumptious surf and turf flavor we all love. (via Melkkos & Merlot)
Coca de Verduras: At the risk of oversimplification, this is basically Spanish pizza, except that the flavors are typically Spanish and you’re going to want to eat this with a fork and knife, not your fingers. (via Loleta)

Traveled to Spain? Discovered any great dishes? Tag us in a photo of your favorites @BritandCo.