Everything You Need to Know to Make Paella at Home 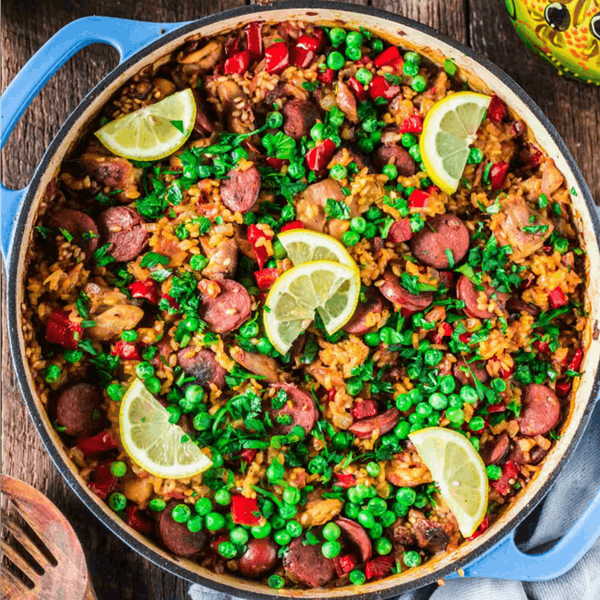 If you’ve ever tasted authentic paella, you know there’s no other dish like it in the world. From the golden, saffron-induced hue to the crunchy bottom layer of socarrat, every bite is a little taste of pleasure. But how can you turn out a great batch of paella at home? We went to an expert to find out.

Chef Armando Rodiel, founder and president of the Paella Wine & Beer Festival, chatted with us about the essential ingredients, equipment, and techniques you need to make the best version of the classic dish you can. Scroll down for his tips and inspiring recipes.

1. Start with the classic recipe. “I began making paella with my mother when I was 12-years old. She taught me how to cook, which led me to start working by making paella every Sunday in my hometown of Valencia, Spain,” Rodiel shared. As with most cuisines, he recommends learning how to master the basics before getting too wild. “I think it’s important to find a balance between tradition and experimentation,” he said of the dish, which dates back to the 1700s. (Photo and recipe via What’s Gaby Cooking)

2. Get the right gear. The essential equipment for cooking this dish? A wide, shallow paella pan, and the right cooking element. “You could cook [paella] on the stove, but I believe the best way is to use a paella burner. They’re inexpensive and very useful,” Rodiel shared. The burner will make sure the wide pan is heated evenly, so you can get the best layer of crispy rice on the bottom (though you an also cook the dish over an open fire or propane grill). Try using one to make this chicken and chorizo paella. (Photo and recipe via Olivia’s Cuisine)

3. Develop the socarrat. Regardless of the ingredients you use, it just isn’t paella without this one thing. “We call it socarrat,” Rodiel said. “It’s the crispy layer on the bottom of the paella, formed at the end of cooking.” To develop, you should always use an actual paella pan, which has more surface area than your usual skillet, so you get more crunch in each bite. Rodiel also advises using short-grained Bomba rice, which will get more crispy than regular white rice. You can use it in this fresh and flavorful summer vegetable paella recipe. (Photo and recipe via FriFan)

4. Make it a party. There’s one thing that sets paella apart from other rice dishes. “It’s such a social dish; everyone eats from the same pan,” Rodiel said. “It’s more than a recipe; it’s an experience that brings people together.” With that in mind, once you’ve mastered the basic paella, you can try this vegan version. That way, you can still share a fun-filled meal with your friends who prefer to go meatless. (via Vegan Heaven)

5. Try an affordable spicy paella recipe. Once you’ve mastered the basics, there’s a good chance you’ll become obsessed with paella. Enjoy it more often by making this affordable recipe, which omits the saffron but follows the classic technique. (Photo and recipe via Kellie Rice Cakes)

6. Or even a squid ink seafood paella recipe. This is a social dish, and its showy presentation makes it great for dinner parties. Really wow your guests by whipping up this dramatic squid ink version. (Photo and recipe via What to Cook Today)

Justina Huddleston
Justina Huddleston is a food writer living in Los Angeles. When she's not busy writing, she spends her time in the kitchen creating both virtuous and decidedly junky vegan food. Buffalo chickpea pizza, anyone? She's also been known to eat a plain block of tofu or beans straight out of the can for lunch, but somehow those culinary adventures don't make it to her Instagram. You can follow Justina on Twitter or see what's cooking in her kitchen on her blog, A Life of Little Pleasures.
Comfort Food Recipes
Food Adulting
Comfort Food Recipes Dinner Recipes Foodie Travel
The Conversation
Reviews:
More From Food Adulting