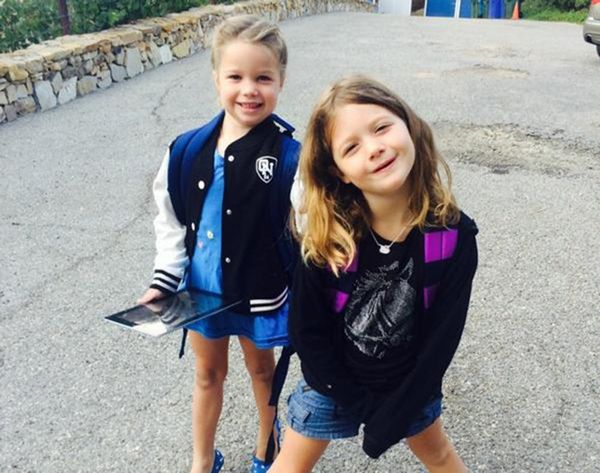 We’re sorry-not-sorry we have babies on the brain here at Brit HQ. To celebrate, we’re talking baby names, aka our favorite question to ask an expecting mom or dad (Sooo… any names picked out yet?!). Since so many pending parents are choosing to wait ’til that very first birthday to find out if they’re bringing a girl or boy into this crazy world, we thought we’d round up the top unisex baby names so you’re prepared no matter what. The unisex baby name is a trend among celebs — Kristen Bell and Dax Shepard named their daughter Lincoln and Kimye went with the adorable North for their little one — and there’s a shift towards unisex and unusual names for babies outside of Hollywood, too. Get inspired with the top 10 unisex baby names.

1. Rowan: The name Rowan has Gaelic roots and means “little red-haired one.” But it’s definitely cute enough to use for children with any/all colors of hair like Girl Meets World star Rowan Blanchard. (Photo via @RowanBlanchard)

2. Quinn: If you’re a Glee fan, you probably already know this name from the character Quinn Fabray, but it can also be a fun variation of the name Quincy for a boy.

3. Kai: Pronounced “Ky,” this Hawaiian name means “ocean,” so if you want to bring a bit of nature into your baby’s life, this is a beautiful choice. Donald Trump’s granddaughter carries the name Kai Madison, which is just downright adorable, don’t ya think? (Photo via Ace Showbiz)

4. Sawyer: The name Sawyer translates to “woodcutter” and has English origins, and it has rocketed to popularity as a girl’s name. The Talk co-host Sara Gilbert chose this for her daughter, while TV co-anchor Erica Hill bestowed it upon her little boy. (via People)

5. Charlie: Charlie is a pet form of Charles or Charlotte, so it’s perfect for boys or girls. Rebecca Romijn and her husband Jerry O’Connell named their twin girls (pictured above in a pic tweeted by mom!) Charlie and (wait to “aw!”) Dolly.

6. Avery: Like a lot of trending names, Avery took the historical path of surname to male name to female name, but still remains a popular choice for boys as well! Angie Harmon and Jason Sehorn rock the unisex names with all three of their daughters: Finley, Avery and Emery — love, love and love.

7. North: Until the Kardashians, North was mostly a male name, but now it’s shot up in popularity as a girl’s name. We bet this will rise even higher on the list for 2014. (Photo via Naibuzz)

8. Finley: This moniker used to be a royal Scottish name, but thanks to Finley Presley, one of Lisa Marie’s twins, all kinds of variations like Finn and Finnlay are becoming popular girls’ names. (Photo via Daily Mail)

9. Elliot: Not too common and not unheard of, Elliot can be strong name for a boy or a cute name for a girl with the option of Ellie as a nickname.

10. Emerson: Once solely thought of as a boy’s name, Emerson is now given to more girls. Teri Hatcher’s daughter Emerson Rose is a perfect example of how you can make a neutral name feminine with a pretty middle name. (Photo via About Movies)

Would you use a gender neutral name for your baby? What do you think the biggest unisex baby names of 2014 will be? Talk to us in the comments below!

Kate Thorn
Kate Thorn is an illustrator, foodie, photographer, and blogger at Create & Kate. She loves creating art, traveling, and all things chocolate. A native to the Great Northwest, she is currently living in London and pretending to be a mature grad student.
Kardashians
Baby Names
Kardashians
More From Baby Names