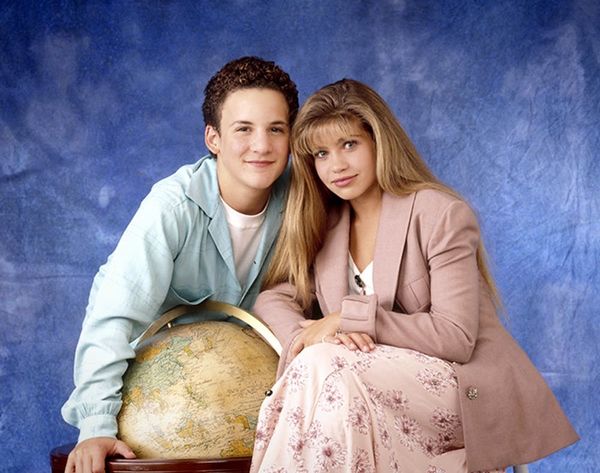 Travelin’ down this road that we call life/the world wide web, we came across something that’s bound to get our fellow ‘80s babies and ‘90s tweens excited to watch the Disney Channel again — the opening credits for the Boy Meets World spinoff Girl Meets World!!!

Ahh!! Check out the first minute of the show below, set to the poppy “Take On the World,” sung by the show’s “Cory and Shawn,” Rowan Blanchard (Riley) and Sabrina Carpenter.

Hijinks, classroom shenanigans, a hint of a scene-stealing silly little brother, a peek at a first love interest, Danielle Fishel and Ben Savage lookin’ darn good, but no Mr. Feeny. Yet. While we want this show to just be a vehicle for Cory and Topanga and their married makeout sessions and, dear god, we hope a Sean hair glam shot or two, it looks like it will really be about the Girl (aka, Riley, daughter of C and T). But we’re kind of okay with that.

Girl Meets World premieres June 27 at 9:45pm ET on the Disney Channel but, taking a cue from Netflix, the first few episodes will be available via Disney’s WATCH Disney Channel site starting tomorrow, May 21! Looks like we’re going to need to take a half day…

Were you a big Boy Meets World fan? Will you watch the spinoff? What show do YOU want a remake of next!?! Share below!

Lisa Raphael
In her past professional lives, Lisa has served the masses as the Editorial Director at Brit + Co, Bieber Whisperer at J-14, Golden Girls Fan Club Prez at Lifetime and Talk Show Host Understudy to Katie Couric. Now, she's taking on the sports world at The Relish, teaching Hairography 101 in her spare time and will forever be trying to fill the hole Zayn Malik left in her heart.
90s
Home
90s Nostalgia Posts that contain video
More From Home