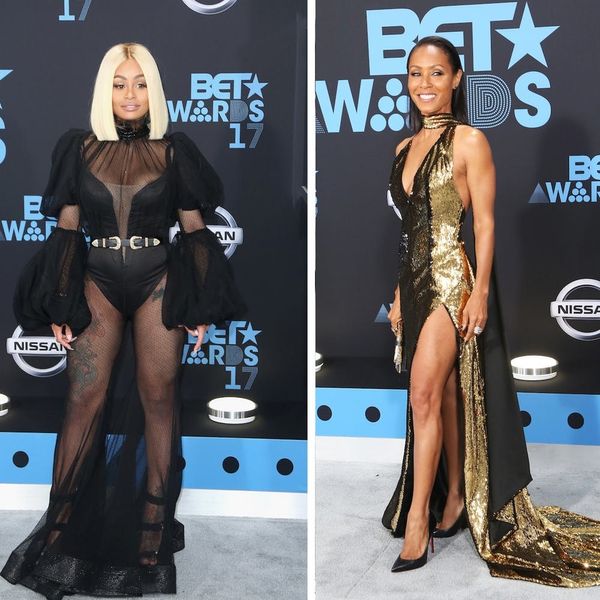 If you missed the 2017 BET Awards, you missed out on a WHOLE lot of good stuff. Not only was host Leslie Jones one-upping her Pretty Woman transformation from last year's Ghostbusters premiere, but Blac Chyna turned heads in a completely see-through jumpsuit and Jada Pinkett-Smith threw it back to the '80s. Scroll through to see all the most stunning red carpet styles!

Blac Chyna: Rob Kardashian’s on-again, off-again partner went for modern glam last night, working an entirely sheer Michael Costello jumpsuit over a simple black bodysuit. While the back left little to the imagination, the front's high neck and flared sleeves gave an overall effect that was so elegant. (Photo via Maury Phillips/Getty)
Jada Pinkett-Smith: The Bad Moms star was pure ‘80s perfection in a slinky gold Alexander Vaulthier sequined gown with a thigh-high slit complete with a matching choker. She finished the look off with a pair of sleek black Christian Louboutin pumps and jewels by Borgioni and Le Vian. (Photo via Maury Phillips/Getty)
Leslie Jones: Last night’s hostess looked the mostest in her bright green Stello halter gown. Its plunging neckline and thigh-high slit kept the comedian right on trend. (Photo via Maury Phillips/Getty)

Kara McCullough: Miss USA's 2017 reign may have gotten off to a rather rough start thanks to her polarizing comments on feminism and healthcare, but she certainly got it right on last night's red carpet, choosing a silver sparkly Sherri Hill mini and a pair of matching metallic pumps. (Photo via Maury Phillips/Getty)

Dascha Polanco: OITNB actress Dasha Polanco went bold in an all-white Bishme R. Cromartie silk suit with a giant ruffled trim that was nothing if not noticeable. (Photo via Alberto E. Rodriguez/Getty)
Amber Rose: Where Blac Chyna glammed it up, bestie Amber Rose kept things more casual in a silky military-esque khaki green mini dress with gold button accents. (Photo via Bennett Raglin/Getty)
La La Anthony : Newly single Anthony got all kinds of dolled up for last night’s awards, and for good reason: It was the TV personality’s 38th birthday! She looked gorge with a high pony, drop earrings, and a glitzy Thai Nguyen one-shoulder gown with intricate beading. (Photo via Paras Griffin/Getty)

Solange: The singer/songwriter (and proud new auntie thrice over!) was the epitome of chic in a black tank with an eye-catching cutout, billowing parachute ankle pants, and a solid white belt while accepting her Centric award. (Photo via Alberto E. Rodriguez/Getty)

Yara Shahidi: The Blackish star kept things fresh and cool with a frayed and ruffled denim Jonathan Simkhai mini dress, oversized Jennifer Fisher hoops, and shoes and clutch by Jimmy Choo. (Photo via C. Flanigan/Getty)
Queen Latifah: Queen Latifah was nothing short of regal in a black off-the-shoulder piece with a ruffled trim and Maxior earrings. (Photo via Maury Phillips/Getty)
Justine Skye: One of the most interesting looks of the evening came from singer Justine Skye, whose The Blonds gold bustier and sequined silver draped skirt combo and strappy Chloe Gosselin pumps became an instant conversation starter. (Photo via Bennett Raglin/Getty)
Kat Graham: Raisa & Vanessa was to thank for the intriguing geometric patterned dress the All Eyes on Me star donned with its figure-eight cutouts. (Photo via Alberto E. Rodriguez/Getty)
Eva Marcille: The America’s Next Top Model winner debuted a stunning new look with long blonde dreads and a delicate boho Fillyboo frock. (Photo via Maury Phillips/Getty)

Which look was your fave? Cast your vote over @BritandCo.

Which look was your fave? Cast your vote over @BritandCo.

Nicole Briese
Nicole is the weekend editor for Brit + Co who loves bringing you all the latest buzz. When she's not busy typing away into the wee hours, you can usually find her canoodling with her fur babies, rooting around in a bookstore, or rocking out at a concert of some sort (Guns N' Roses forever!). Check out all her latest musings and past work at nicolebjean.com.
BET Awards
Celeb Style
BET Awards
More From Celeb Style