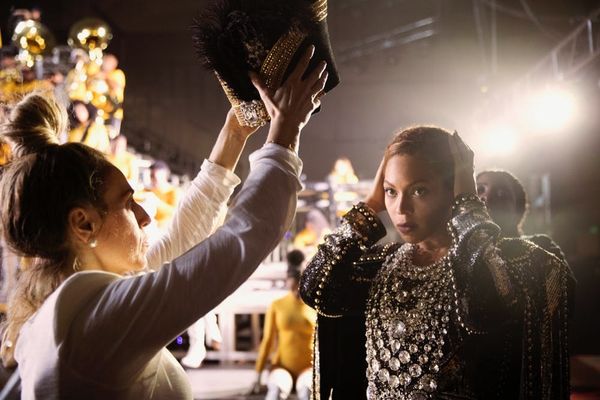 On Wednesday, April 17, Beyoncé dropped her Homecoming Netflix special and a surprise live album of the same name. The concert film, directed by Queen Bey herself, documents her 2018 Coachella set and features lots of behind-the-scenes footage of the grueling preparation that went into the legendary performance, as well as plenty of personal details from the notoriously private pop star. Here are some of the best tidbits we learned in Homecoming.

Her pregnancy was “unexpected.” You may remember that Beyonce was initially booked to headline Coachella in 2017, but that she had to reschedule due to being approximately seven months pregnant with twins Sir and Rumi Carter. Canceling the show was not an easy decision, but the pregnancy had come as a (happy) surprise. “I was supposed to do Coachella the year prior but I got pregnant unexpectedly,” Beyonce says in the film. “And it ended up being twins, which was even more of a surprise.”

She had a difficult pregnancy. Bey has previously opened up about some of the complications she experienced while pregnant, but in Homecoming, she goes into even more detail about how they affected her health and why it was necessary to cancel her 2017 set. “My body went through more than I knew it could. I was 218 pounds the day I gave birth,” she says. “I had an extremely difficult pregnancy. I had high blood pressure. I developed toxemia, preeclampsia. … And in the womb, one of my babies’ hearts paused a few times, so I had to get an emergency C-section.”

After her difficult pregnancy, she thought she’d “never be the same” physically. “In the beginning, there were so many muscle spasms, and just internally, my body was not connected,” Bey says about getting back to work shortly after having the twins. “My mind was not there. My mind wanted to be with my children. What people don’t see is the sacrifice.”

She brought her family to rehearsals as often as she could. Many of Beyoncé’s voiceovers are set to footage of her with her husband, rapper Jay-Z, and their kids, Sir and Rumi, who were less than a year old at the time, and Blue Ivy, who was six. “I would dance and go off to the trailer and breastfeed the babies. The days I could, I would bring the children,” Beyonce recalls in one scene. “I’m just trying to figure out how to balance being the mother of a six-year-old and twins that need me and giving myself creativity. Physically, it was a lot to juggle. It’s like, before I could rehearse 15 hours straight. I have children, I have a husband, I have to take care of my body.”

Getting ready for the show also included a strict diet to rebuild her muscle endurance. “In order for me to meet my goals, I’m limiting myself to no bread, no carbs, no sugar, no dairy, no meat, no fish, no alcohol — and I’m hungry,” she says at one point as she eats an apple.

Putting on Beychella was the challenge of a lifetime— one she doesn’t want to take on again. “I definitely pushed myself further than I knew I could and I learned a very valuable lesson,” she admits in the film. “I will never, never push myself that far again.”

Ultimately, the experience changed her. “I just feel like I’m just a new woman in a new chapter of my life and I’m not even trying to be who I was,” she says in Homecoming. “It’s so beautiful that children do that to you.”

RELATED: Beyonce’s ‘Homecoming’ and 11 Other Netflix Originals for Music Lovers