This Is How Blake Lively Just Ruined Her Phone 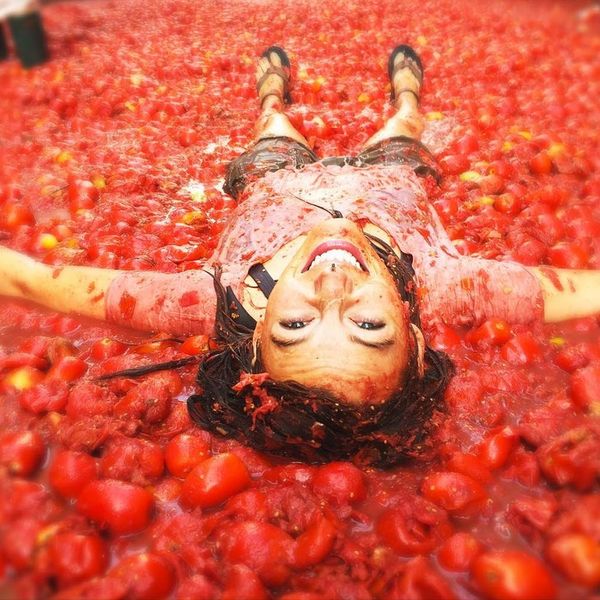 Blake Lively just might be on a mission to forget everything her parents taught her about table manners. The new mom, who has been Instagramming left and right while in Spain, recently shared a photo where she’s rocking chocolate as lipstick and then another where she created a self-portrait out of said chocolate on a plate. And now Blake has taken to the platform yet again to share some snaps from what looks like the most epic food fight we’ve ever seen.

From the photos it looks a lot like the actress partook in La Tomatina, a festival held in Buñol, Spain in which participants have a giant tomato fight purely for fun. However, that isn’t scheduled to take place until the end of August. So considering she’s tagged her upcoming movie, All I See Is You in all of the snap, we’re getting the feeling this may be a Hollywood recreation of the wacky event.

Earlier today Lively posted a photo of her looking pretty nervous alongside the caption, “Before….#YesDummyHasHerPhoneInHerPocket.” You can’t bring an iPhone to a food fight, Blake! Rookie move.

Then, once all the tomato tossing came to an end, Lively posted the update: “..After #ForgetStrawberryBlondeTHISisTomatoBronde #DontRequestThisAtTheSalonForGoshSake #WillIEverLetTheDoggoneBrondeThingGoAlready?!” While she may not have won the food fight, we are going to say that Blake is definitely reigning supreme when it comes to creative hashtags.

Shortly after, Blake posted yet another pic where she looks like she has fully accepted her tomato covered fate. She writes: “…I’ve finally become Italian food. #GoalsCOMPLETE #CloudyWithAChanceOfAngelHair #YepThatsAFlyOnTheCenterOfMyNose.” Now, who’s in the mood for spaghetti?

Have you ever been to La Tomatina? If so share some pics with us in the comments below.