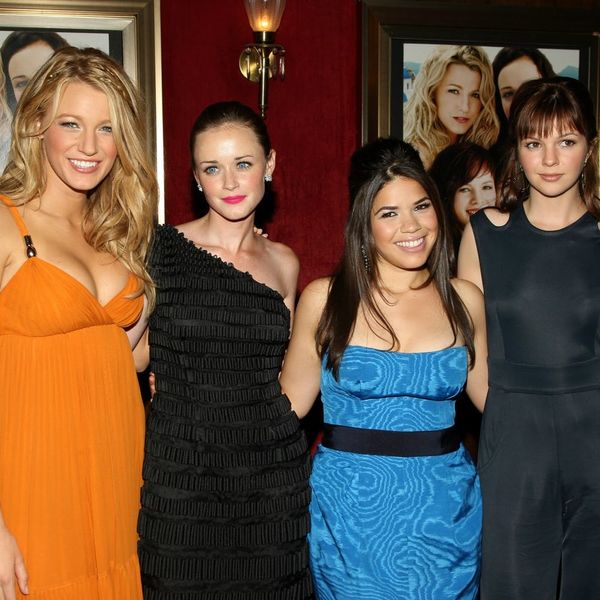 Scrolling through Blake Lively’s Instagram account shows that the actress really loves her BFFs, including her former Sisterhood of the Traveling Pants co-stars, America Ferrera, Amber Tamblyn, and Alexis Bledel. The foursome became fast friends when filming the heartwarming movie when Lively was still a teenager.

The now-grown-up Lively is still very close with her Sisterhood friends — a friendship that all four women regularly document on their respective Instagram accounts — which a new study indicates could have everything to do with how old she was when the four of them met.

Lively was 18 when Sisterhood of the Traveling Pants debuted in 2005, and is probably enjoying the profound, positive impacts of teenage friendships as an adult too. According to new research published in the journal Child Development, close friendships formed in our teens can have huge benefits not only at a young age, but also into adulthood.

The research behind this finding was extensive: For 10 years, researchers followed 169 people and asked them to consider aspects of their friendships and their own mental health. The results of the study show that teen friendships play a long-term role in improving mental health well past the years of lockers and proms. Specifically, the friendships we make as teens can ease our feelings of depression, anxiety, and self-esteem into adulthood.

Leslie, a 28-year-old from Chicago, tells Brit + Co that without the influence of her best friend growing up, she doesn’t know if she’d be the adult she is today. No matter how difficult Leslie thought she was as a kid, her best friend Taylor stuck by her side all through middle and high school.

Leslie and Taylor don’t live close to one another now, but Leslie says that Taylor taught her that she both deserves and is capable of truly meaningful friendships. The closeness the two have cultivated over the years, Leslie says, proves “unmatched feelings that you can’t really get with just any friendship.”

Interestingly, the positive effects uncovered in the new study were the same for men and women, study lead author Rachel Narr and a clinical psychology graduate student at the University of Virginia, tells Brit + Co. One gender difference, however, was how men and women rated the closeness of their relationships: Overall, women described their friendships as closer than men did, she tells us.

Narr further explains that this may have “a lot to do with socialization. Women are ‘allowed’ to describe their friendships in those sort of ‘soft,’ terms, while men aren’t.” She adds that this doesn’t necessarily mean that the way male friendships play out is all that different in terms of mental health impacts, but rather that men and women talk about their friendships differently.

While researchers acknowledge that friends aren’t solely responsible for improvements in a person’s mental health from their teens compared to adulthood, it’s clear that the psychological benefits of teenage friendships can last a long time. People who had the same best friend at the start of the study as they did at the end (the youngest participants were just 15 or 16-years-old at the start) had the biggest drops in depression and anxiety as adults. This signaled to researchers that stability in close friendships makes a big difference to someone’s mental health.

The strongest relationships seemed to be the ones with the most open and honest communication (no shock there!). Teens who had the tightest bonds were able to talk through difficult subjects with one another, and were invested in helping each other out, Narr, told NPR.

Divine Secrets of the Ya Ya AF @americaferrera while professionally editing you into this photo, I realized you have the coolest and most appropriate initials EVER! #BadassAF #SistersForever #tbt

Researchers also determined that age itself could be a huge reason why teen friendships are so formative. At this age, people are able to form close bonds and learn to be intimate and vulnerable with others for the first time, according to NPR. This period of life tends to be pretty challenging and emotionally fraught (puberty isn’t easy to deal with alone, after all!), so close friendships really come to the rescue. Because many teenagers care deeply about peer approval, having a core group of friends to back you up, confide in, and rely on for real friendship goes a long way toward making life better.

NPR reports that while researchers aren’t totally clear on how these benefits carry over into adulthood, some speculate that the support of friends can prevent people from internalizing negative feelings. The coping skills and life lessons learned with best friends at a young age carry over into adulthood, where everyone still has to deal with many of the same psychological stressors as middle and high school. But by the time adulthood hits, our friends have already helped us thoroughly prepare for whatever life throws at us.

So whether your best buddy is a pal you met at recess or is a famous actress you once co-starred with, teenage friends clearly help us learn how to navigate our social lives, as well as become more confident in ourselves. If you are a happier, stronger person than you were at age 15, chances are you have your BFF to thank for a lot of it.

Do you have a story about how your teen BFFs made a lasting impact on your life? Tell us on Twitter @BritandCo.

Elizabeth King
Elizabeth King is a politics, history, and culture writer based in the Twin Cities. She is generally pretty cranky but still enjoys traveling, music from the early 2000's, and plotting the resistance. Feel free to say hi on Twitter at @ekingc or check out some of her work at www.elizabethcking.com.
Blake Lively
Womens Health
Blake Lively Friends Mental Health study
More From Womens Health