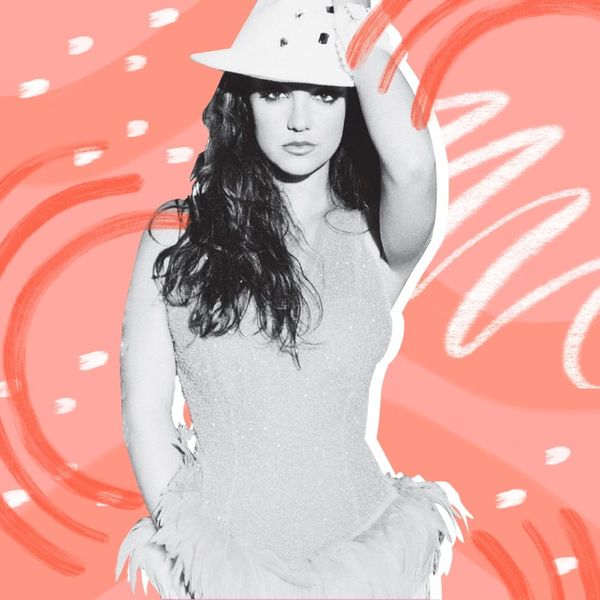 2007 Britney Spears is a 2017 Etsy sensation. A quick search on the site turns up dozens of T-shirts proclaiming “I FEEL LIKE 2007 BRITNEY” and motivational mugs with slogans like, “If Britney survived 2007, you can make it through today.” A pin for sale depicts Britney halfway through shaving her head — an unambiguous depiction of her now-iconic 2007 breakdown.

For most of us, our bad haircuts, binge-drinking, and breakups from 2007 have been scrubbed from digital memory. But Britney’s lows have been immortalized in memes and listicles. Her now-iconic 2007 Blackout album, which turns 10 this month, featured several less-than-subtle hints at what that year’s drama looked like up close. The song “Piece of Me” famously addresses her status as a paparazzi punching bag, while “Freakshow” features lyrics like “If they wanna know / tell ‘em mind their own / but if they want to look / we can give ‘em a encore.”

10 years after her shaved head, umbrella violence, stints in rehab for substance abuse, the custody battle with her ex Kevin Federline over their two young sons, and botched performance at the MTV Video Music Awards, 2007 Britney is still part of the pop culture canon. A few years ago, we might not have given much thought to a tote bag on Amazon emblazoned with an image of bald Britney, clippers in hand. But today, that indifference feels jarringly flippant in contrast to our purportedly evolved perspective on mental illness and sympathy for those who are struggling.

Katrina Gay, national director of strategic partnerships for the National Alliance on Mental Illness, believes the conversation surrounding mental health has considerably advanced in the last decade. Celebrities speaking openly about their struggles with mental illness — the likes of whom include Selena Gomez, Demi Lovato, Kehlani, and Kendrick Lamar — have helped open up the dialogue.

“There’s been an evolution in the understanding that people are really struggling and that it’s not appropriate for us to take advantage of individuals for media benefit when they’re not at their best,” Gay said.

But Spears is a celebrity from a different era. Today’s stars are quick to take a proactive PR approach to their own mental health, often in the form of a statement tapped out in the Notes app and shared across social media. Demi Lovato and Selena Gomez have both made public statements about their respective struggles with bipolar disorder and panic attacks and depression.

Spears’ unraveling took place in the public eye without the ability to control her narrative via social media. Instead, the media storm that followed delighted in the spectacle of the star’s misfortune. “Britney Spears Photographed Sobbing, Sitting Barefoot Outside House” was a headline rather than a concern. A ruthless Rolling Stone profile of Spears in 2008 described her as “this braless chick padding around town on hilariously mundane errands.”

In the story, a paparazzo waits outside of Spears’ house, playing the Blackout album to “summon” her: “‘She’s gonna come back out after she does her drugs or changes her clothes, whichever comes first,’ he jokes, lighting a cigarette.” Later, another paparazzo camped outside Spears’ residence nonchalantly comments, “You don’t want an ambulance to roll out with a body bag and miss that.”

A megastar’s fall from grace offered an enticing (if not barbarous) form of entertainment in 2007, but today, Spears seems to be back on the rails. In 2017, news stories about Spears focus mainly on her workouts and “kooky” Instagram persona. Now that we’ve seen Spears’ dark period come to a close, we’re content to engage lightheartedly with her breakdown — posting a meme, drinking out of a novelty coffee mug — because we choose to believe she came out of 2007 mostly unscathed, even when the scars from that year are still evident today.

These days, Hollywood is quick to applaud the bravery of stars like Selena Gomez and Demi Lovato for coming clean about their mental health challenges. Only the vilest internet trolls would dare speak ill of a celebrity like Gomez ending her 2016 tour early due to anxiety and depression, or trash-talk Lovato’s mental health advocacy work. Yet in some ways, Gomez and Lovato have more visibly conformed to expectations about how women should move through the world, which has helped them mitigate the potential for reputation damage.

“Selena and Demi are [discussing mental health] with decorum, which is the ‘appropriate’ way for young women to behave,” said Kara Kvaran, an assistant professor of instruction in the women’s studies program at University of Akron. “They’re not being messy in public.”

This isn’t to downplay the huge impact of stars like Gomez and Lovato talking about their mental health struggles. By starting a conversation, they’re helping to shatter stigma. Yet, it’s striking how we lavish celebrities with praise only when they acknowledge their private struggles without outwardly showing symptoms (although Demi has made headlines for incidents in the past, she has also been quick to run damage control).

By contrast, Spears — and Lindsay Lohan and Amanda Bynes, among others — is a woman who was momentarily written off for being out of control when her struggles became too much to contain. Like Spears’ 2007 meltdowns, Lohan and Bynes’ respective mug shots and Twitter rants instantly became schadenfreude for the public.

“I call it the ‘bitches be crazy’ syndrome,” Kvaran said. “As soon as you say that a woman is crazy you can just dismiss everything else that is going on with her and you don’t have to take into account her perspective or her issues, because she’s ‘crazy.’ Case closed.”

It seems easier for male celebrities to shake a fall from grace. Mel Gibson’s racist and sexist diatribes made headlines starting in 2006, but that didn’t stop him from receiving an Oscar nomination and accompanying critical acclaim earlier this year. In maintaining her career after 2007, Britney Spears defied the odds. Over the past decade, she’s reclaimed her place in the limelight, and her “crazy” has become part of her lore in a way that is both celebrated and decontextualized.

When someone lightheartedly compares themselves to ’07 Britney, it’s shorthand for having a bad day or needing some rest. Spears doesn’t even need to be mentioned by name for people to catch the reference. At this year’s Grammy awards, when Katy Perry told Ryan Seacrest that she had taken a break before releasing her latest single, she added: “It’s called taking care of your mental health; I haven’t shaved my head yet.”

Perry’s remark incensed Spears’ loyal legions of fans, who took to Twitter to criticize the singer for making light of Spears’ mental health struggles. Her comment was clearly out of line. Yet, by likening a dramatic new hairdo or crummy day at the office to an ‘07 Britney moment, we risk doing something similar: equating our own quotidian grievances with another woman’s mental health struggles. It’s kind of like saying “I’m so OCD!” when really we mean “I like using a planner to keep organized.”

Stephanie McAdam, an Etsy shop owner who sells an “If Britney can make it through 2007, you can make it through today” mug, disagrees that the ’07 Britney memes are necessarily dismissive. She finds the slogan inspiring, not problematic or meanspirited.

“It reminds me of what she went through and how she rose from that situation and came back stronger. I often think of her when I find something in life insurmountable or overwhelming,” McAdam said. “I don’t see it as making fun of her at all, but rather applauding her sheer will to survive the situation.”

But Britney is not the ringleader of her circus, at least not outside of lyrics to the 2008 album of that name. The turmoil in 2007 precipitated Britney’s conservatorship that began in 2008 and to this day places her father at the helm of her finances and nearly every decision in her life. In 2016 the New York Times reported, “Her most mundane purchases, from a drink at Starbucks to a song on iTunes, are tracked in court documents as part of the plan to safeguard the great fortune she has earned but does not ultimately control.”

It can be easy to forget about the extreme circumstances of her conservatorship, especially today, as 35-year-old Britney bears little resemblance to her 2007 self. She’s held down a steady gig since 2013 with her “Piece of Me” residency at Planet Hollywood in Las Vegas, which ends this December. Journalist Taffy Brodesser-Akner wrote in a 2014 piece for Matter:

“Britney isn’t the fuck-up we decided she was during a relatively short but well-publicized period of her life. She drops off her kids and picks them up from school just about every day. She shows up on time, hits every mark, is polite and soft-spoken. She rehearses five or six hours every day, saying, ‘Let’s run through it one more time.’ Britney works.”

We’re okay with sipping out of mugs that say “Coffee Makes Me Less 2007 Britney” because we’ve witnessed her emerge victorious from her lowest point. That cheeky slogan on a mug doesn’t tug at our collective conscience the way it might if we bought a shirt that said “I’m feeling like 2005 Whitney!” or a water glass that reads “About to have an Amy Winehouse moment!” It would be cruel to memorialize the women who didn’t make it out of the darkness by poking fun at their tragedies.

But by going along with the ‘07 Britney joke, we risk conflating one woman’s breakdown with our own bad hair days. The Etsy-friendly slogans fail to consider that Spears is still not free from the restraints of the conservatorship that took effect in response to her breakdown. She appears to be doing better, if her playful posts on Instagram are any indication. But even if she is in on the joke with us, there’s more to the story. She’s still not fully in control.

And control used to be, at least earlier in her career, one of the pillars of Britney’s self-identity. In 2006, not long after the public began seeing the first signs of her impending breakdown, Britney released a new fragrance forebodingly named “In Control.”

It was a nod to her maturity, according to Britney at the time. But 11 years later, it reads more like an omen.

“As I get older, the names [of my perfumes] go with my age,” Britney told the Washington Post in 2006. “It’s more demanding, it’s more sensual, it’s black; it’s about being in control. That’s cool and inspirational. Girls need that.”

How do you support women you know who struggle with mental health issues? Tell us @BritandCo.