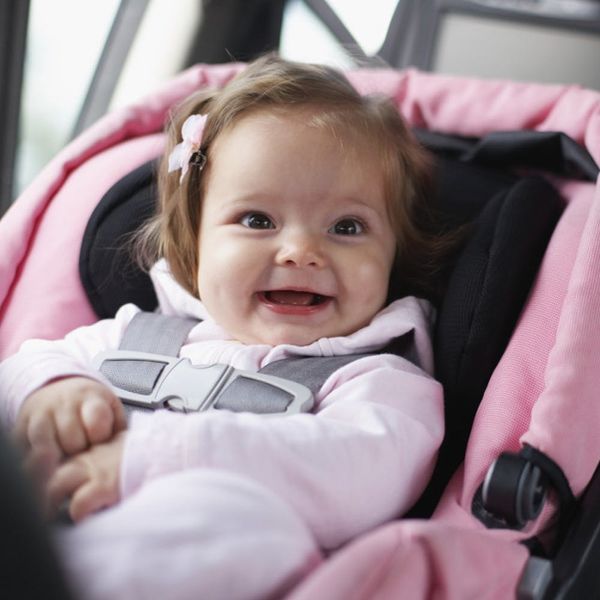 When Kim Kardashian posted an “Aww!”-worthy photo of Saint online, you’d think everyone would’ve swooned over the beautiful baby’s awesome adorableness. Except the one-year-old was pictured in a front-facing car seat. Let the shaming begin! Yep, Kardashian West got caught at the center of a car seat scandal. Facebook lit up with comments blasting the mama for turning the kiddo around too quickly — California law requires kids under age two AND less than 40 pounds or 40 inches to be in rear-facing seats. While everyone might just want to chill, as we don’t know the stats on Saint’s size, it does bring up the fact that there’s car seat confusion aplenty. Check out what you need to know about these super-necessary safety devices.

1. They work. Yeah, yeah, we’ve heard it before — your mother let you ride on the front seat hump as a toddler and nothing happened to you. Sure, you weathered the totally unsafe station wagon rides of your youth without incident. But that doesn’t mean you were safe. Car seats seriously reduce the risk of death from motor vehicle accidents. The stats speak for themselves. Proper use of a car seat cuts the risk of infant death by 71 percent and the risk of toddler death by 54 percent, according to the CDC.

2. They’re not just for babies. Your kiddo isn’t so much a baby anymore. They’re a full-fledged kindergartner and way too cool for a car seat… or not. They still need to ride in a booster until they’re eight (or meet height and weight requirements). Like car seats for the tiny set, boosters can drastically decrease the risk of death from a car accident for kids ages 4-8. According to the CDC, the reduction rate is a whopping 45 percent.

3. There are both age and size guidelines. Getting back to Kim K’s predicament — lots of mamas don’t know whether they should go by age or size guidelines. Here’s the scoop from the AAP’s guidelines and the NHTSA, among other organizations and agencies. Infants and toddlers under two years should ride in rear-facing car seats. That is, unless they reach the highest weight OR height allowed by the seat manufacturer. If your kiddo outgrows their seat, it’s time to either turn it around (if its convertible) or get a new front-facing one.

4. Your child’s specific fit matters. The whole either/or thing is totally confusing. Age, pounds, inches… ugh, you have no idea what to believe. Obviously, you want to do what’s right for your child. And that’s why you need to make sure that they’re facing the right way for how they fit in the car seat. Here’s why age kind of doesn’t matter (yes, we know it matters — but it’s only part of the equation). Your 22-month-old probably isn’t the same size as your neighbor’s toddler. Following a blanket age guideline does very little to make sure your kiddo actually fits in their seat. The point of a car seat is to make sure your much-smaller-than-an-adult child is safe and secure. An ill-fitting car seat puts your child more at risk than keeping them turned around until they reach some arbitrary age.

5. The guidelines apply to boosters too. Kim K’s issue isn’t isolated to the rear vs. front facing debate. There’s also a problem when it comes to the car-seat-to-booster transition. Your kiddo is five, so obviously they’re facing the front. But they’re small for their age. Age alone doesn’t mean they’re ready for the big-kid booster that their friends are using. Again, you need to follow the age OR weight/height guidelines.

6. Seat belts play a factor. Yes, we do need to rehash this. Yet again, age isn’t the only indicator of when your child moves from one seat to another. All children should be belted into the back seat — whether it’s in a car seat, booster, or regular seat belt. When your child outgrows their booster seat, the belt positioning safety feature of it is no longer working. They’re too tall for the belt, leaving the possibility that it could injure them in an accident. Check the manufacturer’s guidelines, and move your child from a booster to just a backseat belt when they exceed them.

7. Proper installation is key. It doesn’t matter how well you follow the age, weight, or height guidelines if you don’t install the seat correctly. An improperly installed car seat may not keep your little one snug in an accident. Don’t stress if you have no clue what’s going on in those odd little diagrams the seat manufacturer packed into the instruction booklet. Many local community police and fire stations do free car seat safety checks to make sure that they’re properly installed.

8. There are multiple seat location choices in the car. There are three choices when to comes to car seat installation — behind the driver, behind the passenger, and in the middle. Okay, this isn’t a multiple-choice test here: The middle isn’t always the best option. Some cars have a narrow middle seat that bumps up in the center. This makes it almost impossible for you to install the seat tightly. It also may not have a lower anchor, meaning that the seat won’t be as secure as in one of the side positions.

9. You need to have a car seat to go home from the hospital. Your baby’s first car seat experience will be on the way home from the hospital. That is, unless you walk. Most hospitals and medical centers won’t let you leave unless you have a seat and the staff watches you secure the baby in it. The good news here is that your baby will be safe from the start. Oh, and the super-knowledgeable hospital staff will be on hand to help with buckles, tethers, and other car seat quandaries.

10. Car seats have expiration dates. Like the milk in your fridge, the car seat has an expiration date. That’s right. While it won’t “go bad,” its effectiveness is considered outdated after the “use by” date. With constant advances in technology and more research being done into car safety, the six or so years that most manufacturers give are absolutely necessary for a refresh.

Erica Loop
Erica Loop is a freelance writer living in Pittsburgh. When she's not busy creating kids' activities for her blog Mini Monets and Mommies, you can find her trying to hang out with her teenage son, being chased by her two Olde Boston Bulldogs or teaching a children's karate class (she's a third degree black belt!).
Healthy Living
Parenting
Healthy Living New Moms
More From Parenting