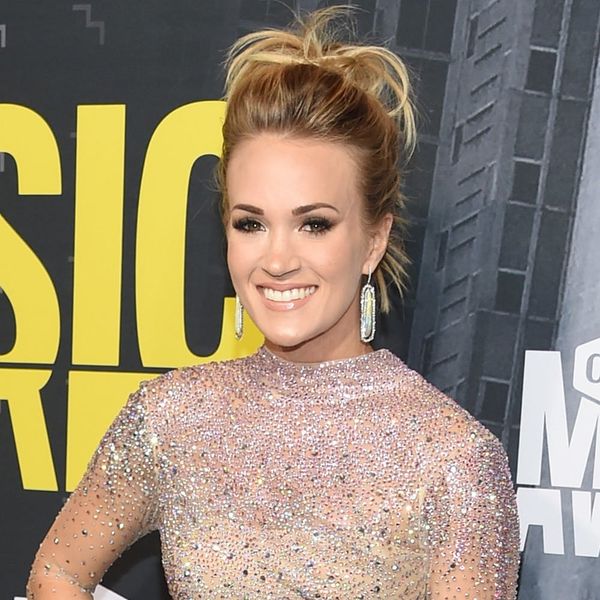 Carrie Underwood revealed this week that a November accident at her Nashville home had left her not just with a broken wrist requiring surgery, but also with a bad cut that required 40 to 50 stitches in her face. Now, a photo posted just one month after her accident has resurfaced online.

Just worked out next to @carrieunderwood NBD… she is adorable and so gracious… LOVE HER! #BelowDeck pic.twitter.com/scDPGudEe3

On December 12, Bravo TV Below Deck star Adrienne Gang snapped a pic with the country superstar after working out alongside her at the gym. “Just worked out next to @carrieunderwood NBD…” the reality alum tweeted with a photo of the two in workout gear. “She is adorable and so gracious… LOVE HER!”

The photo was taken one month, almost to the day, after the singer was treated for her injuries. This week, Underwood released a letter to her fan club addressing the accident and suggesting that it might have altered her appearance. “When I am ready to get in front of a camera, I want you all to understand why I might look a bit different,” she wrote, noting that she was receiving excellent care and healing but still “not looking quite the same.”

It was only after initially posting the photo that Gang learned what Underwood had been through. “I had no clue she was injured,” she shared, along with links to articles about the accident. “She looked amazing!” This week, she replied to a Huffington Post reporter who asked if it appeared as if Underwood might have been “wearing heavy makeup or anything that might have covered up scarring” at the time, saying, “Not that I noticed! She looked great!”

Underwood has stayed out of the public eye since the accident. On her own Instagram, she has only posted throwback photos and a selfie with her face bundled up in a cozy scarf.

Have you ever had stitches? Let us know @BritandCo.