Celeb BFFs Who Got Matching Tattoos 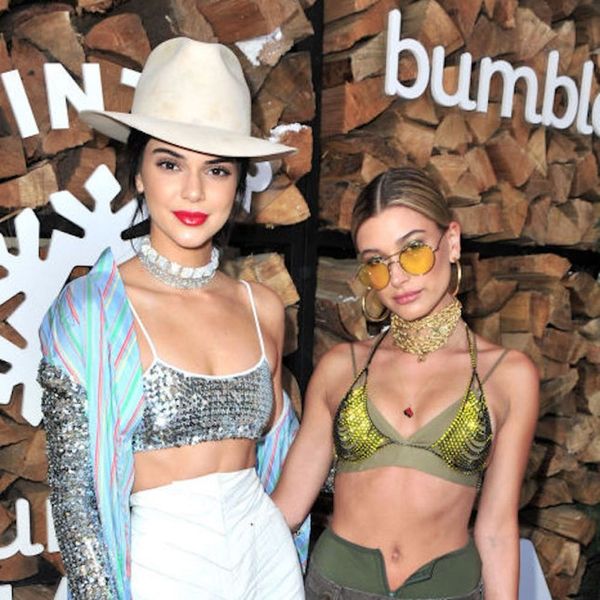 Matching tattoos are a cute and trendy way for BFFs to make their friendships permanent. Often, celebrities are bonded through working on shows and movies together, by being family or simply by surviving the weird, wild world of Hollywood together. Here are some of our fave celeb BFF friendship tattoos.
The Pretty Little Liars cast: Shay Mitchell, Ashley Benson, Lucy Hale, Troian Bellisario, Janel Parrish, and Sasha Pieterse each got inked with the letter of their PLL character's first name on their "shh" finger. Too cute. (Photo by Kevin Winter/Getty Images)
Kylie Jenner and Jordyn Woods: These two are basically inseparable, and the matching squiggly "M" lines that they both got on the inside of their pinky fingers just seal the deal. (Photo by Gustavo Caballero/Getty)
Kendall Jenner and Hailey Baldwin: The model besties have not one but TWO BFF tats. The first tattoos they got together weren’t matching, but they were adorable — and minimal. Months later, they got matching, tiny, broken-heart tattoos, not unlike the best friends necklaces from your childhood. (Photo via Jerod Harris/Getty)
Hailey and Ireland Baldwin: Hailey Baldwin also got matching, lower-case, cursive "Baldwin" tattoos with her cousin Ireland on the inside of their middle fingers. (Photo by Grant Lamos IV/Getty)
Maisie Williams and Sophie Turner: The Game of Thrones costars and BFFs got inked with “07.08.09” — the date they both heard they got cast on Game of Thrones. Aww! (Photo via Jamie McCarthy/Getty)
Selena Gomez and the 13 Reasons Why cast: Selena Gomez executive produced the Netflix series 13 Reasons Why, and she joined stars Alisha Boe (Hannah’s ex-BFF Jessica) and Tommy Dorfman (poet Ryan Shaver) in getting inked with semicolons on their forearms, representing mental health awareness and suicide prevention. (Photo by Cindy Ord/Getty)
Miley Cyrus and Elsa Pataky: Cyrus got cute little matching wave tats with fiancé Liam Hemsworth’s sis-in-law, Elsa Pataky, and they’re perfect. (Photo via Jamie McCarthy/Getty)
Harry Styles and Ed Sheeran: Styles and Sheeran once got matching Pingu tattoos for their mutual love of the cartoon penguin. Styles got the word “Pingu,” styled like the show’s title card, while Sheeran got the penguin. (Photo via Gustavo Caballero/Getty)
One Direction: Harry Styles also has a group tattoo with the 1D guys. At one point they all got matching screw tattoos on their ankles — except for Niall Horan, who got guff from the guys for sitting it out. (Photo by Jason Merritt/Getty)
The Suicide Squad cast: While filming Suicide Squad, some of the cast got an all-caps “SKWAD” as an homage to the film. Margot Robbie and Will Smith could be seen doing the tattooing, though it wasn’t clear who the final recipients of the ink were. (Photo via Jonathan Leibson)
Cara Delevingne and Kelly Osbourne: Delevingne may or may not have joined her Suicide Squad castmates in getting matching tattoos, but there’s no question that she has at least a few other buddy tats. She and Kelly Osbourne got matching hearts on their fingers, and she also got matching DDs on her side with her friend Jourdan Dunn. (Photo by Larry Busacca/Getty)
Drake and Rihanna: Drake and Rih have a history as on-again/off-again BF and GF, but they’ve also been good friends for a long time. During their last rumored on-again stint, they got matching camo shark tattoos. (Photo via Michael Loccisano/Getty)
The Glee cast: Lea Michele has matching "Imagine" tattoos with Glee costars Jenna Ushkowitz and Kevin McHale, and she also has matching little stars with Ushkowitz and Amber Riley. Cute! (Photo by Kevin Winter/Getty)
Hillary Duff and The Walking Dead’s Alanna Masterson: These two friends got the cutest matching ghost tattoos. (Photo by Craig Barritt/Getty)
Sarah Hyland and Dominic Sherwood: Hyland, boyfriend Sherwood, and their friend Stephanie Branco got matching arrow tattoos — though each has its own personal details. (Photo by John Sciulli/Getty)

Would you ever get a matching tattoo with someone? Tell us @BritandCo!